Cover preview: The meaning of the Sophie Grégoire Trudeau show

A sneak peek at of our latest cover: Anne Kingston on Sophie Grégoire Trudeau 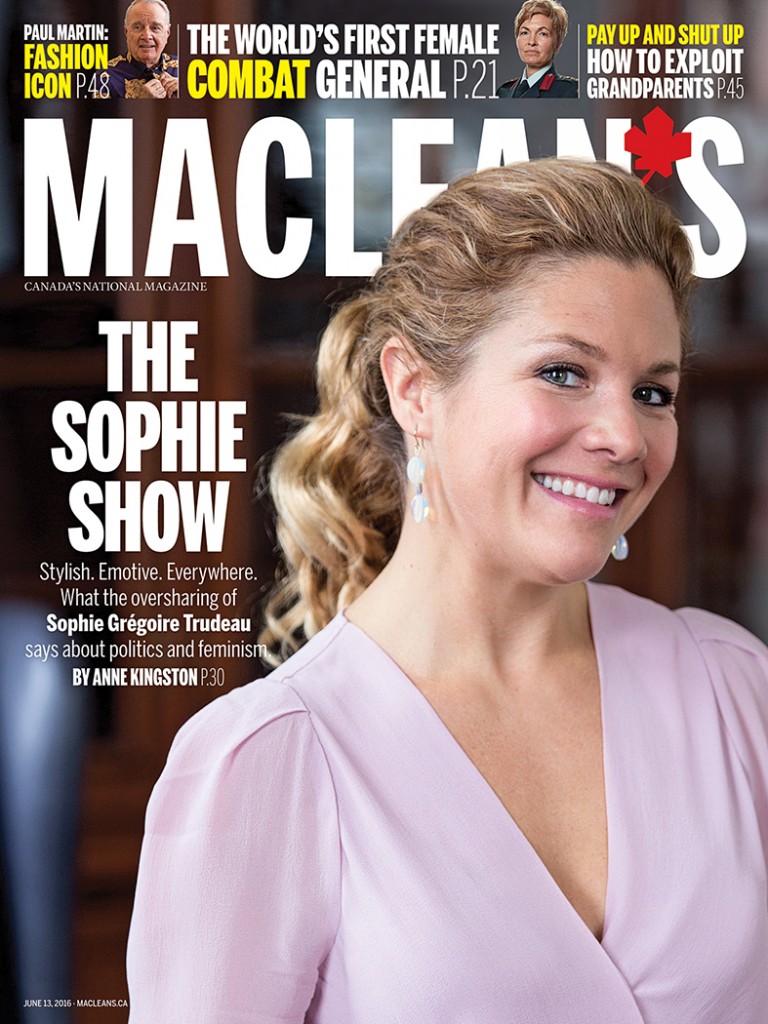 As anyone who follows geopolitical developments is aware, Justin Trudeau celebrated his 11th wedding anniversary three days early last week, taking a day off in Japan from his first G7 summit. He was leading by example, he said: “This is the kind of work-life balance that I’ve often talked about as being essential in order to be able to be in service of the country.” Had the Prime Minister decided to take a day off that lacked romantic significance in the midst of the summit, the outcry would have been even louder than it was. But celebrating his marriage, a love story told in breathless detail on Liberal.ca, the Liberal party’s website, proved heart-warming for many. Of course, even those less charmed couldn’t avoid the inevitable result: footage of Trudeau and Sophie Grégoire Trudeau holding hands on an anniversary hike, trailed by RCMP, as she looked up at him, laughing, her hand (where else?) on her heart.

It wasn’t the world’s first glimpse of the Trudeaus’ talent for exhibitionist intimacy. That came last November when they were photographed in American Vogue, Justin Trudeau’s first sit-down media portrait after being sworn-in as Prime Minister. The resulting image—Trudeau gazing soulfully at his wife, his arms wrapped around her as she leaned into him—made waves internationally, which isn’t surprising. The pheromones practically leapt off the page.

Since then, she’s been embroiled in a polarizing incident in which she told Le Soleil that she needed “a team to help me serve the people.” But what has become clear is that Grégoire Trudeau is a vital, weight-bearing pillar in brand Trudeau, a linchpin of his identity as a sensitive, progressive PM and dad. The imagery surrounding the marriage reinforces Trudeau’s optimistic political agenda, says Alex Marland, an associate professor of political science at Memorial University: “By presenting himself as part of a team, he’s embodying gender equality.” It also inadvertently signals what Marland calls a “growing ‘presidentialization’ of the parliamentary system, and not only in Canada.” And beneath the progressive sheen of the Trudeau family brand may lurk something surprisingly more retrograde.

Read Anne Kingston’s full story on Sophie Gregoire Trudeau, and much more, in the latest issue of Maclean’s. The new issue will be available Wednesday night for tablet and mobile readers on our new Maclean’s app on Apple Newsstand and Google Play, on Texture by Next Issue, and on newsstands everywhere this week.