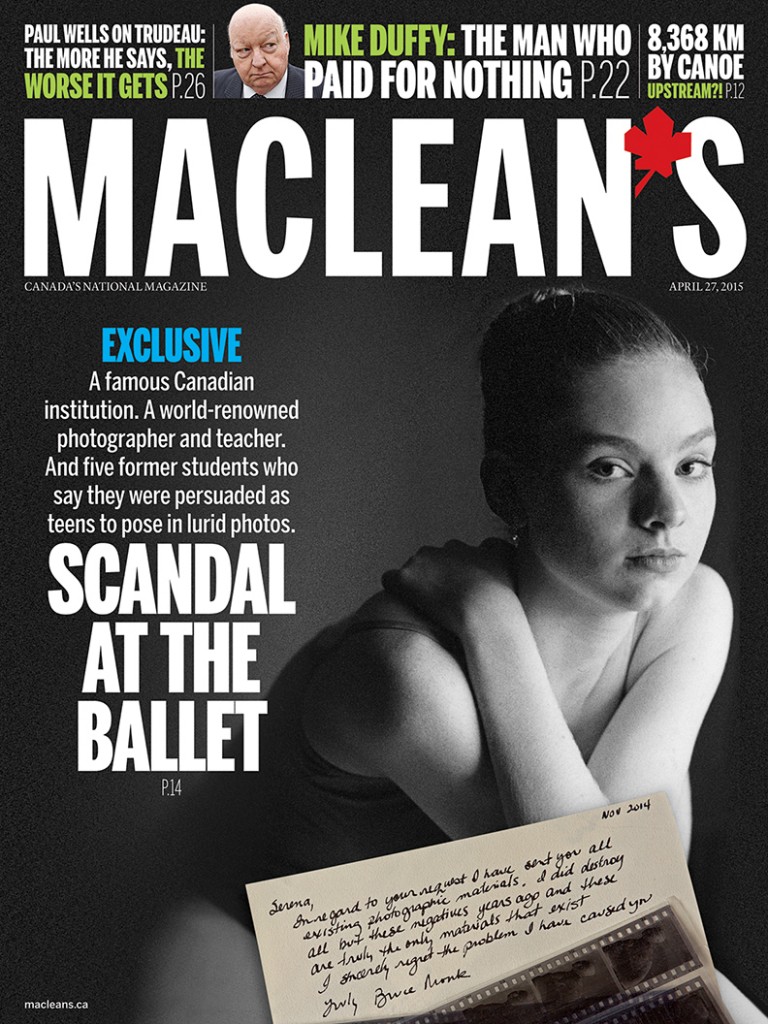 Late last year, a former student at the Royal Winnipeg Ballet School (RWBS) wrote a letter to her old teacher, Bruce Monk. Monk is better known outside dance circles as a photographer whose images are part of the Canadian Museum of Contemporary Photography’s permanent collection, housed at the National Gallery in Ottawa, and can be seen in the 2001 film Vanilla Sky, starring Tom Cruise and Penelope Cruz, where they stand in as the work of Cruz’s character, a photographer.

But the former student, now 39, was seeking possession of another sort of photography. “I want you to mail ALL negatives, contact sheets and any prints that you have of me,” she wrote in the letter she says she sent him. “Everything. I think this is fair. Please don’t make me consult a lawyer or take the matter to the school.”

Days later, she was surprised to get a handwritten reply. “In regard to your request,” Monk wrote in a note dated “Nov 2014,” “I have sent you all existing photographic materials. I did destroy all but these negatives years ago and these are truly the only materials that exist[.] I sincerely regret the problem I have caused you[.]”

The enclosed negatives featured the former student as a girl of 16 or 17. Minutes after Monk took the exposures, she says, the top of her bodysuit came down. Monk evidently was not aware when he scrawled that note that the woman was participating in an investigation led by the Winnipeg Police Service, one that has since grown to include several former female RWBS students.

Four of these women have decided to speak out and tell their story to Maclean’s. These women say they told police that Monk photographed each of them alone in the late 1980s and early 1990s, either nude or in various states of undress. They say they were under the age of 18 at the time. (The Winnipeg Police Service said it will not comment on its investigation.) These women now worry the photos Monk allegedly took—intimate images of their nude or partially nude bodies—may be changing hands in a way they never could have imagined 25 years ago.

Police have since handed the case over to the Crown’s office. The Royal Winnipeg Ballet immediately placed Monk on paid administrative leave, says the organization’s executive director—he has since been fired. Charges have not been laid. Maclean’s contacted Monk repeatedly, including via a letter sent by registered mail that laid out in detail the allegations contained in this story. Monk has refused to comment on the complaints by the former students and, last week, wrote in an email: “on the advice of my attorney, I have no comment on any of these ridiculous allegations.”

Read the full story in our latest issue, available to tablet and mobile readers with a free 30-day trial of Next Issue. You can also download this issue for free on Apple Newsstand and Google Play. Our cover story will appear on macleans.ca later this week.