If Fort McMurray were the face of a clock, flames surrounded it from the numbers four to 11 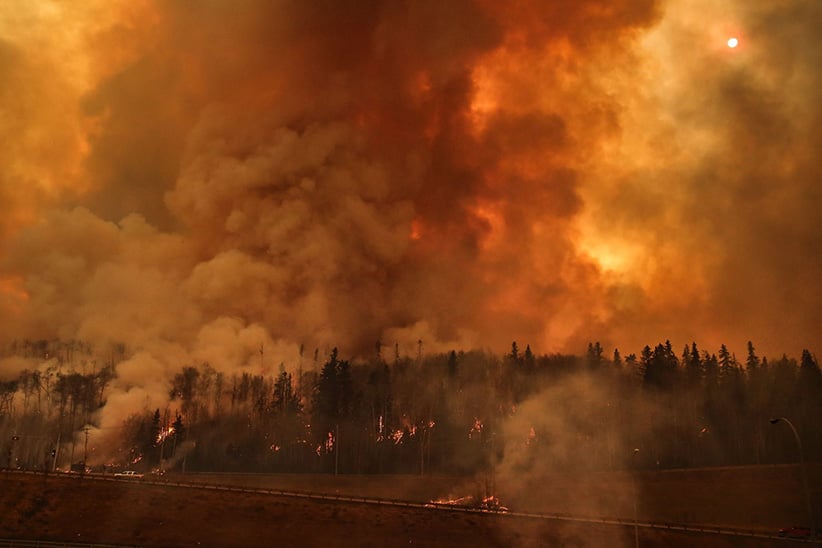 Fire seen from the highway in Fort McMurray. (Serghei Cebotari)

FORT MCMURRAY, Alta. – Crews fighting to save Fort McMurray from rampaging flames water bombed the city Thursday to try to keep away a wildfire so intense it has spawned its own weather.

“It was creating its own high winds yesterday and even lightning was coming from the smoke clouds it created,” Chad Morrison of Alberta Forestry told a briefing in Edmonton on Thursday.

He said the fire continued to grow Thursday, but at a slower rate than before, and the spread was happening in forested areas away from the community.

Officials could not update the number of structures that have burned – already at 1,600 – saying crews had not had the time.

Morrison said there were 22 water bombers at work and more were coming in, including four from Quebec.

“But let me be clear: air tankers are not going to stop this fire,” he said. “It is going to continue to push through these dry conditions until we actually get some significant rain.”

Crews received a small break Thursday with temperatures forecast to fall to 16 C from the low 30s. But low humidity and high winds were expected to keep the situation fluid and dangerous.

They continued to fight the blaze near the evacuated community of Anzac, where the flames were getting closer to buildings.

The risk in the rest of the province also remained high and a provincewide fire ban was issued Thursday afternoon.

Premier Rachel Notley told a news conference that officials cannot speculate on when it might be safe for residents to return to the city except that “it will not be a matter of days.”

Notley also said in coming days there will be more information about concrete aid for evacuees, including government-issued cash cards and temporary housing options.

She asked all evacuees “whether you’re in the reception centre or you’re staying in your friend’s rec room” to register themselves either online or by phoning the Red Cross, adding it is crucial to the province’s ability to assess what support everyone requires.

The fire, which had been menacing the oilsands capital since the weekend, rode a rapid shift in winds Tuesday afternoon to cut through the city on an east-west axis. It divided the main road and sent 80,000 residents fleeing in opposite directions under a mandatory evacuation order.

The fire remained wrapped around the west and southern edges of the city. If Fort McMurray were the face of a clock, flames surrounded it from the numbers four to 11.

Evacuees began their second full day out of their homes. Thousands remained in oilfield work camps north of the city, while the rest had moved south to stay in hotels, in campgrounds, with friends or in designated centres that included Edmonton.

By late afternoon, 4,000 people had been airlifted out of the camps, and the hope was to get another 8,000 out by end of day.

Scott Long with Alberta Emergency Management said it was too dangerous to begin an escorted convoy of evacuees out of the area along Highway 63, but officials were hoping to try again at first light Friday morning.

In preparation, gasoline trucks were being sent in Thursday to fuel up vehicles for the long trip through the city and to the south.

Officials said there were 350 firefighters battling the blaze – 200 of whom were within the city keeping structures safe.

The military was on standby, but had not been called in except for helicopter support to rescue stranded residents.

The fire has proven to be as capricious as it has been hellacious, leveraging high winds to level neighbourhoods in the south and southwest, transforming homes that once housed families into smoky wastelands of concrete, rebar and ash.

Crews have managed to save critical infrastructure, such as the downtown, the hospital and the water treatment plant.

Fire threatened the airport Wednesday, but Long said it sustained “mild damage” and was still in operation.

Officials said they have yet to determine what caused the fire, although they know it started in a remote area about 15 kilometres from the city.

There have been no reports of fire-related deaths or injuries.