J. Randall Barrs, a prominent lawyer who has defended clients in several murder and drug cases, was attacked in the driveway of his Yorkville office 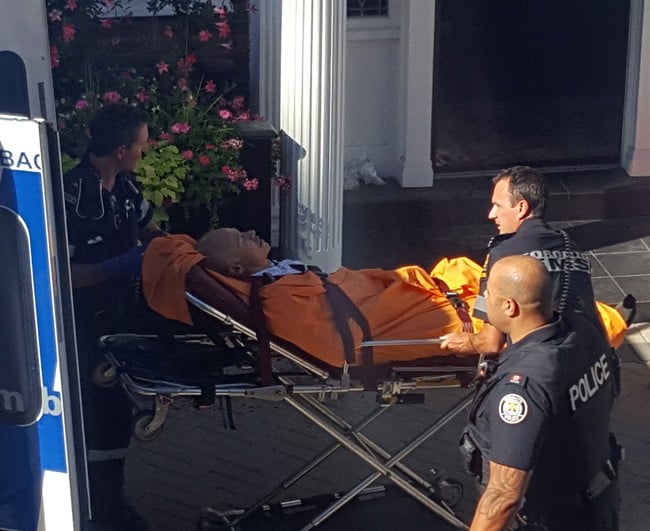 Paramedics wheel away shooting victim J. Randall Barrs in Toronto, Tuesday, Sept.20, 2016. Barrs, a criminal defence lawyer who once worked on one of the biggest marijuana cases in Canadian history, has been identified as the man wounded in a shooting in an upscale Toronto neighbourhood. (Peter Schilling/Handout/CP)

TORONTO – A man who witnessed a “horrific” daytime attack in an upscale Toronto neighbourhood recalled Wednesday seeing a prominent criminal defence lawyer crawl towards his office after being shot, leaving a trail of blood behind him as officers fired at the gunman.

Peter Schilling, who saw the shooting from his second-floor office on Tuesday afternoon, said he was on the phone with a colleague staring out the window when he saw J. Randall Barrs get out of his car in the driveway of his Yorkville law office.

A silver Honda Civic then screeched to a stop at the end of the driveway around 3:30 p.m. and a man stepped out, Schilling said.

“He got out of the car and fired four to five shots and (Barrs) hit the ground right away, all lower body hits — and lots of blood, as you can see now,” Schilling said from his office, where he works as a surgical consultant.

A large blood stain remained Wednesday, leading from the end of the driveway to the front of the law office.

Seconds after the shots rang out, Schilling said he saw a man he believed to be an undercover officer sprint toward the scene, draw his weapon and begin firing at the gunman, who was wearing a reflective construction vest and hard hat.

The man tried to get away in the car, Schilling said, but was boxed in by unmarked SUVs.

“It was just absolutely horrific and as loud as you think it would be,” Schilling said. “It was like watching a TV show.”

Ontario’s police watchdog said plainclothes officers from nearby Halton Region were conducting surveillance in the area when a man opened fire on a lawyer who was leaving his office around 3:30 p.m.

The Special Investigations Unit said one of the officers shot the 51-year-old suspect, who is listed in serious condition in hospital after undergoing surgery. The agency, which investigates reports involving police where there has been death, serious injury or allegations of sexual assault, has taken over part of the investigation.

Toronto police continue to investigate the shooting of the lawyer, said spokesman Const. Victor Kwong. Neither Toronto nor Halton regional police would say why Halton officers were in the area at the time.

Barrs, 66, remains in hospital recovering from gunshot wounds to his legs. A respected trial lawyer, Barrs has defended clients in several murder and drug cases, according to his website, and once worked on one of the biggest marijuana cases in Canadian history.

He once represented farmers who ran a marijuana grow-op in a former Molson brewery in Barrie, Ont. — one of the largest such busts in the country to this day. The men were sentenced to two to five years behind bars.

The attack comes roughly a year after a lawyer in Winnipeg was seriously hurt in a letter bombing that police allege was orchestrated by her client’s ex-husband.

Maria Mitousis lost her right hand in the July 2015 incident. Guido Amsel was charged with attempted murder after three letter bombs were sent to his former wife’s workplace and the offices of lawyers who had represented him and his wife in their divorce. He is set to face trial next year.

A former RCMP undercover narcotics agent turned lawyer, Paul Beaudry, was gunned down in his Montreal office by two assailants in 1991.

Months earlier, Sidney Leithman, a prominent Montreal defence lawyer, was killed as he was driving to work. Leithman had represented some of the city’s biggest mobsters and drug-smugglers in his 30-year career.

In 1985, another high-profile defence lawyer, Frank Shoofey, was killed with four shots to the head outside his downtown Montreal office. None of the Montreal cases have been solved.

Lawyer Oscar Fonseca was shot dead in a courtroom rampage in Toronto in 1982. Kuldip Singh Samra had carried a .357 revolver into an Osgoode Hall hearing about a dispute over a temple election, ostensibly planning to shoot himself in protest. He opened fire instead, killing Fonseca and another person.

Samra was eventually convicted of two counts of first-degree murder and one count of attempted murder.