Crossing the line at the border 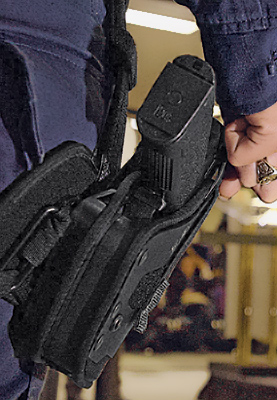 Border guards stationed at Toronto’s Pearson International Airport had good reason to be suspicious of a certain Nigerian passenger who arrived at the customs counter on March 3, 2002. The man’s ticket, for a one-way trip from Lagos, was purchased the day before—in cash. His lips were dry and pasty, a common trait among drug smugglers who swallow their deliveries. And when asked why he was travelling to Canada, the man, Esemuede Henry Idada, said he was doing research for a new business venture: exporting frozen turkeys to Africa.

To quote Federal Court Judge Russel Zinn, it was an “extremely unusual” explanation.

But eight years later, it is the Canada Border Services Agency that has some explaining to do (and some damages to pay). Even though the judge agreed that Idada was a legitimate target for further investigation—including a strip search and a stool sample, used to detect narcotics—two agents were a tad rough for the court’s liking. They resorted to “intentional infliction of force,” Zinn ruled, and then tried to “minimize” their actions on the witness stand. “It is apparent from the treatment that Mr. Idada received that some officers do think they can act without repercussions,” the judge ruled. “While it should go without saying that the Customs Act does not give them carte blanche, I think a reminder is warranted.”

The first “intentional infliction of force” occurred when Idada, a naturalized U.S. citizen, showed up at the counter. As he flipped through his wallet looking for his passport, an impatient officer, Nick Kostovski, “jerked” it from his hand and said he didn’t have time for this “nonsense.” A few hours later, Idada was pinned to the floor and handcuffed because officer Dan Tangney feared that his briefcase was a potential weapon. “The force used was not justified and not reasonable,” the judge ruled. For the record, Idada’s stool samples came back clean. He was not sneaking drugs into Canada, and he really was dabbling in the frozen turkey business. The feds now have until the end of April to agree on a dollar figure for damages.