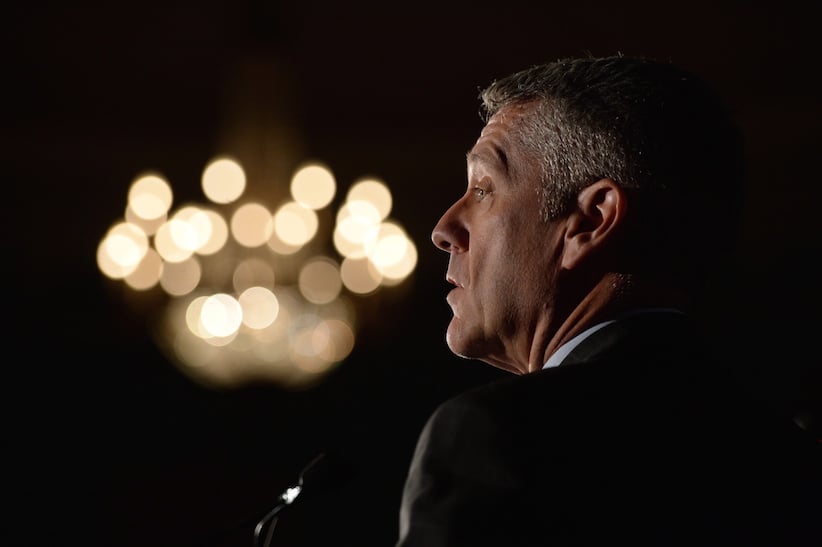 Jean-Pierre Blais, CRTC chairman, delivers a speech at a Canadian Club of Ottawa event at the Chateau Laurier in Ottawa on Thursday, March 12, 2015. (Sean Kilpatrick/CP)

GATINEAU, Que. – The big four TV service providers are defending how they rolled out new, trimmed-down TV packages earlier this year, denying in hearings Wednesday that they were being “paternalistic” with customers by placing restrictions on the cheapest of their offerings.

All four companies told the hearings they’ve learned lessons from the roll-out — about what their customers are looking for and in the case of BCE Inc., how to better train their front-line employees.

The chairman of the Canadian Radio-television and Telecommunications Commission opened two days of hearings studying the newly mandated basic cable and satellite packages, saying many consumers question whether they’re getting any value for their money.

While some appreciate the new offerings, many clearly are not happy with how the new package choices were implemented, Jean Pierre Blais said in his opening remarks.

“We received a number of comments from satisfied Canadians,” Blais said.

“However, other Canadians are dissatisfied and shared their concerns and frustrations about the way some providers are offering the affordable basic package and the new smaller channel packages.”

Blais pointed to one example of a cable customer who, while inquiring about a $25 package, was told he’d lose discounts on other services that added up to double that price.

The so-called “skinny basic” TV packages were mandated March 1, along with channel bundles of 10 channels or less, or a-la-carte programming.

Blais said one of the most common consumer complaints was that service providers made it complicated to switch services, noting in particular that Rogers Inc. (which owns Maclean’s), required customers to visit a Rogers store to finalize channel selections.

“Requiring (consumers) to go the extra step … of going to a store actually creates a barrier,” said Blais.

But Rogers said what is more frustrating for its customers is ordering TV services online or over the phone, only to realize later they didn’t get exactly the services they want.

“I don’t see it as … being paternalistic,” said Rogers vice-president Melani Griffith, explaining that the policy helps the company better understand customer needs.

Rogers also said it doesn’t train its front-line employees to discourage customers from buying its cheapest TV package option. It argued, in fact, that “skinny basic” TV has proven itself as a “gateway” to gain new customers who would otherwise not have subscribed to cable services.

Prior to introducing its $24.95 “starter” package in March, Bell Canada sales staff in Atlantic Canada were directed not to promote the lower-tier service, BCE vice-president Robert Malcolmson confirmed Wednesday.

“Some training materials were not accurately reflective of our obligation to promote (the service),” Malcolmson told the hearing.

“The lesson we learned from that, and obviously it was a disappointment for our customers, was the need to centralize our training and elevate our training.”

Many of the hundreds of complaints received by the CRTC and the Public Interest Advocacy Centre (PIAC) centred on requirements imposed by some carriers, including Bell, to buy other services such as Internet, in order to gain access to the mandated smaller TV service.

Just ahead of the hearings, Bell announced Tuesday that it would offer its smallest TV package as a “stand alone” service by March 2017, eliminating the bundling requirement.

Videotron officials told the hearing that their new TV offerings conform with the spirit and letter of the CRTC’s requirements and offer their customers greater choice and flexibility.

Shaw Communications said the introduction of “skinny basic” taught the company a surprising lesson; many of its high-end Internet customers — so-called “cord cutters” — were opting to supplement their streaming by adding basic cable.

Still, critics questioned whether the hearings were relevant, nearly eight months after the CRTC implemented the new TV requirements.

“I’m not sure why they’re even holding the hearing,” said Bruce Cran, president of the Consumers’ Association of Canada, which was scheduled to be represented at the hearings on Thursday by PIAC.

“The regulator heard all of these complaints a long time ago and could have issued clarifications of the rules back then.”

The hearings were held in advance of a Dec. 1 deadline for the TV providers to offer both small channel packages and individual channels, on top of their smaller basic packages.