'Daddy, let's go to Canada': the fearful march from Trump to Canada

Haitian immigrants coming into Canada through the Quebec-New York border say they were motivated by Trump, not Trudeau. 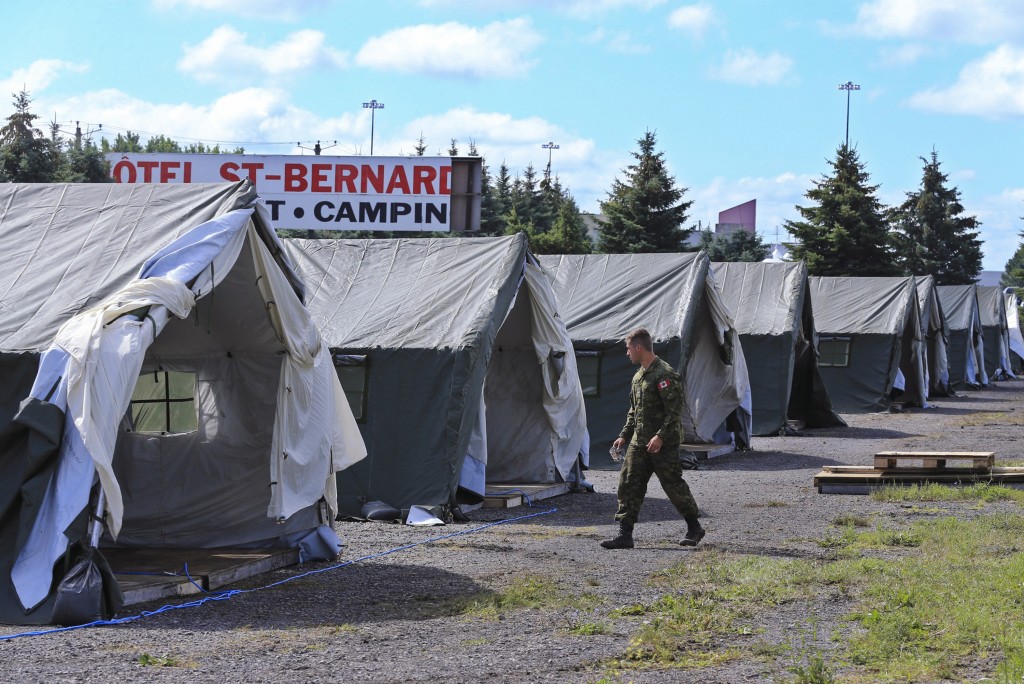 The migrant camp is expanded by the military located on the Canadian border on Saturday, Aug. 12, 2017. Thousands of people have crossed over into Canada from an irregular crossing near the Champlain-St. Bernard de Lacolle border in hopes of finding residency in Canada. Among them are Haitians who worry that their Temporary Protected Status in the U.S. could soon end under the Trump administration. (Al Diaz/Miami Herald/TNS via Getty Images)

CORNWALL, Ont. — Their lives changed in an instant that July day when the government letter arrived telling them that her work permit was not being renewed.

For five years, Sheila Francois lived, worked and paid her taxes in Fort Lauderdale, Fla., to help support her three teenaged children. When she and husband, Frank, read that letter — no renewal and no explanation — they knew their life in the United States was over.

“If you have status and you see that immigration stops it, right away you think one thing — deportations,” says 44-year-old Frank Francois.

“The minute we saw that happen and as we are watching the news, we saw Canada taking people, we said, ‘we might as well take a chance.'”

The Francois family are among nearly 7,000 asylum seekers — most of them Haitian — who have flooded across the Quebec-New York state border since mid-July when the Trump administration announced it might end their “temporary protected status” which was granted following Haiti’s massive 2010 earthquake. They are among the first few hundred the government has relocated to this eastern Ontario processing centre.

Few here have heard of Justin Trudeau and no one says they saw his now-controversial January Twitter message welcoming immigrants facing persecution. The tweet was heavily criticized by the Conservative Opposition for sparking the American exodus.

But many here say they uprooted their new American lives because of something more primal: they were driven by fear of the anti-immigration politics of U.S. President Donald Trump.

“I decided to come to Canada because the politics of migration in the United States changed,” says Haitian-born Justin Remy Napoleon, 39. “I was scared. I came here to continue my life.”

Like Frank Francois, Napoleon says he feared deportation over Trump’s policy shift, so he left his adopted home in San Diego, flew to the eastern seaboard and boarded a bus for the northern border. It wasn’t the first time he decided to start over in another country. He left Haiti in 2006 for the Dominican Republic and then went to Brazil.

Napoleon says he dreamed of coming to Canada from as far back as his time in Haiti. When he crossed the border earlier this month, “I thought I was entering a paradise.”

Jean-Pierre Kidmage, 43, took a three-day bus ride from Miami to New York before taking a taxi across the border. He says he doesn’t know much about Canada but he’s heard good things. He hit the road because he was worried the Trump administration would deport him.

He’s been here less than two weeks, but he wants to stay. “I sleep well here. Better here than in the U.S.”

Lingering unease is palpable outside Cornwall’s Nav Centre, where they are being temporarily housed. Young men and women, some with children, pace the grounds, their eyes trained on mobile phones. More than a dozen adults politely decline interviews.

Some await taxis to take them into town to shop. A few roll suitcases towards a handful of cars and minivans bearing Quebec licence plates that periodically arrive during the day. The new arrivals here are free to go once they have registered their claims and officials say most are headed to Montreal.

Now, more than a month and 2,550 kilometres after leaving his most recent home, Frank Francois sits on a bench in warm sunshine. He won’t be photographed, but he’s happy to discuss what has been a life of epic migration. It has been a life of running — from his native Haiti in 1997 to the Bahamas and from America to Canada.

He grew up on a farm in Port-de-Paix, the oldest of three brothers and four sisters. He yearned to become a doctor after high school, but there was no way his family could afford the $13,000 in tuition, so he got a visa to the Bahamas.

Soon, he began working construction jobs, sending some of his earnings home.

“Once you make money to pay your bills, you can help the people that you left behind in Haiti.”

He built his own family in the Bahamas. That’s where his three teenagers were born. His family spent a decade and a half there until more bad news arrived in the mail: the government informed him of a new law that called for the immediate expulsion of anyone who’d been in the country as a visitor for more than 10 years.

His family re-established itself in Fort Lauderdale, near Miami, where Sheila had relatives. She went first with the three children, got visas, her work permit and set the kids up in school. Her husband got a visa and joined them in 2012.

He stayed after it expired and periodically found under-the-table work in construction, but it wasn’t easy. “It’s hard when you don’t have a legal status, to survive and work for your families.”

The children went to school, made friends and the family got on with life in a rented apartment. Now, aged 13, 14 and 15, the Francois children have become extremely aware of the changing political climate in the U.S.

“Every day, they say, ‘Daddy, every time we watch the news we don’t see any policy that the president (has) that’s in our favour.’ They were afraid to face deportations.”

Then, when their mother’s rejection letter came, the kids weighed in again.

“My children said, ‘Daddy, we were born in the Bahamas’ — this is their words — ‘we think Canada can help us.’

Now, his family’s fate rests on receiving one more piece of official government correspondence: a notice that they qualify to have their asylum claim heard. That would start a process that will allow his children to go to school and for him to get a work permit.

“All I want Canadians to know about me is I am a working man,” he says.