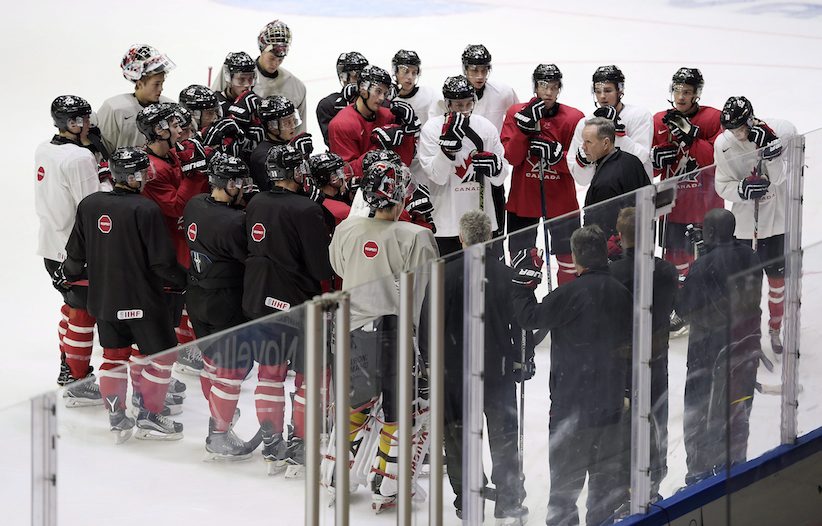 Canada’s head coach Dave Lowry talks to his team during practice in Helsinki, Finland on Friday, December 25, 2015, prior to the start of the IIHF World Junior Championship on Dec 26. Canada will face the United States in their first game of the championship. THE CANADIAN PRESS/Sean Kilpatrick

HELSINKI — Dave Lowry is ready for an old hockey rivalry to be renewed.

Lowry will be behind the bench as Canada plays the United States on Saturday in both teams’ first preliminary game of the world junior hockey championship.

Canada’s head coach saw the intensity of the rivalry last year when he served as an assistant coach on the gold medal-winning team.

“They’re emotional games,” said Lowry at Helsinki’s Ice Hall as his players opted for an off-ice warmup instead of a morning skate. “Last year, to be involved with it on New Year’s Eve, you know that there’s a tremendous amount of respect and there’s a real physical element and it’s a real exciting game to be a part of.”

The United States brings a high-powered offence to the ice for this year’s tournament.

Christian Dvorak and Matthew Tkachuk are the top scoring players in the Ontario Hockey League, while Alex DeBrincat is fourth. Highly touted forward Auston Matthews, who plays professionally in Switzerland and is expected to be chosen first overall in this summer’s NHL Draft, will also contribute to the Americans’ attack

Lowry says the Canadians can’t single out any one American player to try to shut down.

“You pay attention to who their top players are but at the end of the day you have to play a good team game,” said Lowry. “I don’t think you can shut one guy down, pay attention to one guy, because they’ve got some real talented players and they have a real good supporting cast.”

The two teams will play similar styles, meaning the winners will likely have made the fewest errors.

“It’s going to be a game that you’re going to have to really limit your mistakes,” said Lowry. “Both teams can score, both teams like to generate off the rush. We just have to make sure we’re mindful of where we’re putting pucks.”

Another factor for the Canadians will be the man behind the bench for the United States: Ron Wilson, who was last head coach of the Toronto Maple Leafs.