A silver lining in the PQ's identity gambit

No point fretting, as it’s likely the PQ will backtrack — as they have on everything else 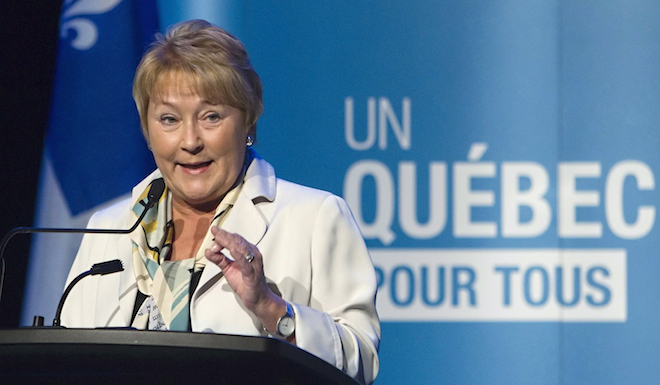 Should the Parti Québécois’ “Quebec values charter” become law, it will be by far the most comprehensive set of rules governing the wearing of religious symbols in North America. The government would have the power to remove daycare workers, police officers, health care staff, judges and civil servants (though not, ironically enough, elected officials) from their positions, should they insist on wearing head coverings or “conspicuous” religious symbols. Crucifixes and the like can be worn—but only if they aren’t too flashy. Turbaned Sikh men and veiled women, be they practising Muslims or grieving Catholic widows, need not apply.

If there is a silver lining for critics of the PQ government’s latest identity gambit—and there are many critics, within and beyond Quebec’s borders—it might be this: There is very little chance that such a charter will pass muster, legally or politically, in its current form. The proposed law, which will be introduced this fall, is already on shaky legal ground; one of the PQ’s own advisers would allow only that the charter “might” withstand the all-but-inevitable legal challenges against it.

There’s a chance it won’t even live long enough to see the inside of a courtroom. If the Parti Québécois has proven anything during its year in power, it’s the capacity to backtrack on its many chest-thumping declarations. Exhibit one: Bill 14, the PQ’s effort to reinforce Quebec’s language laws.

When first announced by minister Jean-François Lisée in December, the proposed law contained similarly vast limits on the ability of immigrants to study and work in English. This included prohibiting immigrants from attending English-language CEGEP finishing schools, mandatory French-language daycares, and extending the Frenh-language charters to apply to small businesses, as well as large.

Practically from the outset, Lisée and language minister Diane de Courcy began backing away from the more controversial aspects of the bill, including the French-language daycare and CEGEP stipulations. It wasn’t enough. Released with great fanfare by the PQ, Bill 14 is currently dying a quiet legislative death in the bowels of National Assembly committees.

There are other examples. Over the last year, the PQ has reversed itself on rescinding the health tax, greatly increasing government mining royalties and keeping electricity rates frozen, three of the party’s main election promises. The same goes for its batch of tax increases for higher-income earners, and its plan to retroactively tax dividends and capital gains. Finance minister Nicolas Marceau reversed himself on both—and said the government may be forced to present a deficit budget after months of promising otherwise.

What is the cause of these frequent reversals? Premier Pauline Marois has said it’s because of her minority government—or, in the case of the budget, cold economic reality. Yet much of the pressure faced by the PQ has come from Quebec’s voting public, not its opposition parties. Having been unpopular throughout its year in power, the party has shown itself to be particularly vulnerable to the loud squawk of public opinion. And despite the PQ’s claims to the contrary, there has been much squawking over its values charter.

Save for a few exceptions, Quebec’s commentariat has come out loudly against it, as has the province’s secularist society, the (militantly secular) Quebec federation of women and the (equally secular) Fédération autonome de l’enseignment, one of Quebec’s main teachers’ union federations. Louise Harel, a former péquiste minister and Montreal mayoral candidate, came out strongly against the charter. The Bloc Québécois typically walks in lockstep with the PQ; nonetheless, the party stopped short of endorsing it.

Tellingly, the PQ has already shown signs of softening the charter’s scope. Its architect, PQ minister Bernard Drainville, has said certain institutions like hospitals and universities will be able to opt out for a renewable five-year period, meaning places such as Montreal’s Jewish General Hospital could conceivably argue for perpetual extensions. Of course, it’s entirely possible that, with the charter, Drainville is spoiling for a fight with the federal government; for the sovereignist party, a legal challenge from Ottawa is the perfect cudgel with which to go into an election.

Quebecers, though, will likely see past such a distraction, come election time. While one poll showed a small majority of Quebecers favour a Quebec values charter, another suggested they don’t much care about it either way. This second poll, published recently in L’Actualité magazine, placed the charter 10th out of 11 priorities on which Quebecers feel the government should concentrate—well behind government spending, tax reduction, fighting corruption and employment.

Unfortunately for the PQ, Quebecers seem to want their government to focus more on the purse strings than head coverings.