The dead cat on the 2015 campaign trail

Stephen Harper’s campaign was floundering, until he threw something on the table that changed everything 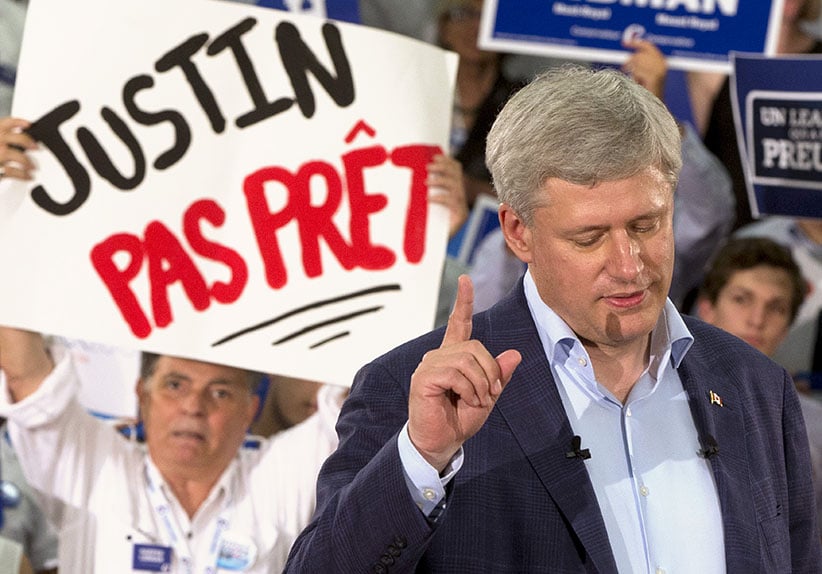 I didn’t really appreciate the power of the “dead cat” strategy until now, as the niqab issue explodes and Prime Minister Stephen Harper’s polling numbers keep going up. But since the “dead cat” threatens to transform the election, certainly in Quebec, it’s worth a second look.

It first blipped on my political radar screen in early September when Harper hired the “Wizard of Oz,” Australian political consultant Lynton Crosby. Crosby is well known in political circles for helping people such as U.K. Prime Minister David Cameron and London Mayor Boris Johnson, but he’d been accused of dangerous “dog whistle” politics to secure the wins. The Globe and Mail’s Tu Thanh Ha wrote an excellent piece on Crosby, and that’s where I first heard about the whole “dead cat” thing.

I didn’t think much of it at the time. After all, our election was then focused on other issues, such as Mike Duffy,  child care and the economy. Not dead cats.

But then something changed. The Syrian refugee crisis spilled into the campaign after that tragic picture of young boy Alan Kurdi, washed up on the beach, went viral. Harper accused the other leaders of wanting to throw open our borders to hundreds of thousands of refugees, without security checks. Liberal Leader Justin Trudeau and NDP Leader Tom Mulcair called it blatant fear-mongering. I wrote a column called “Bring on the endgame,” in which I argued that the response to the crisis had sparked a culture war, unleashing dangerous “animal spirits.” I was riffing on John Maynard Keynes’s use of the term “animal spirits,” his economic description of irrational, emotional behaviour. I never thought the animal spirits came from a dead cat. It looks like as though they do.

“This is it; the whole dead-cat theory is working,” my radio show producer Peter Harris said this morning, as we prepared to cover the French-language debate. In the article on Crosby, the Globe describes him as the master of the dark arts of politics, especially proficient in finding issues that voters suddenly seize upon and that turn around a flagging campaign. When he worked for John Howard, the former Australian prime minister, Crosby pioneered the slogan, “We decide who comes into this country,” playing on fears of immigration, and who should be a citizen. Starting to sound familiar? And that’s where the “dead cat strategy” came up.

In 2013, Johnson wrote a piece in the Telegraph about campaign tactics he learned  from his “Australian friend”—Crosby. It’s worth reading the entire excerpt here: “Let us suppose you are losing an argument. The facts are overwhelmingly against you, and, the more people focus on the reality, the worse it is for you and your case. Your best bet in these circumstances is to perform a manoeuvre that a great campaigner describes as ‘throwing a dead cat on the table, mate.’

That is because there is one thing that is absolutely certain about throwing a dead cat on the dining room table—and I don’t mean that people will be outraged, alarmed, disgusted. That is true, but irrelevant. The key point, says my Australian friend, is that everyone will shout, ‘Jeez, mate, there’s a dead cat on the table!’; in other words, they will be talking about the dead cat, the thing you want them to talk about, and they will not be talking about the issue that has been causing you so much grief.”

So there it is. The dead cat.

Harper’s campaign was floundering from Duffy to the second recession. The change wave threated to drown him. And instead of a life jacket, his Australian friend threw him something better: a dead cat. The niqab issue. It’s all anyone can talk about. It fits perfectly into his agenda of security and fear of change. The NDP, which was once riding high on polls that showed Quebecers were ready to turf Harper, have whiplash. It has lost control of the agenda. It’s all niqab, all the time.

It may be dangerous, or “dog whistle politics,” as Calgary Mayor Naheed Nenshi told me. But clearly, it works. And at least we know how to identify that animal spirit on the loose across the country. It’s a dead cat.