Dear Leafs: Thank you for sucking

Overcoming adversity is such a cliché. It’s so refreshing to see you go the other way. 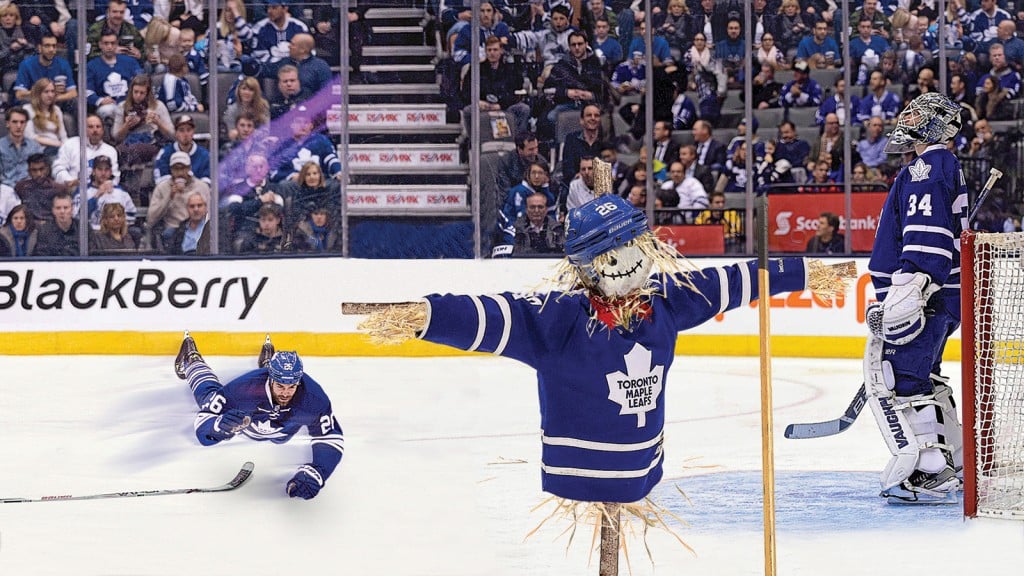 It would be poor form to allow the NHL regular season to come to a close without taking a moment to deliver a heartfelt message of appreciation to the unsung heroes of 2014-15:

On behalf of hockey fans with the good taste not to cheer for you, thanks for being so unfailingly, so unexpectedly, so unabashedly terrible this season. You brought so much joy to so many—to millions who delight in their own team’s successes, but who find deeper pleasure in moments of blue-team haplessness. And you sure showed zero hap this year.

So thank you, Leaf players, for scoring so few goals in 2015 that your sticks should be affixed with the advisory: “For ornamental purposes only.” Thank you for coming face to face with adversity—and immediately handing over your lunch money. Overcoming adversity is such a tired sports cliché: it was refreshing to see you go the other way.

Thank you for being a franchise so comfortable with losing that, of late, your game-day roster basically includes a scarecrow in a helmet and that hologram of Tupac. Thank you for your locker-room suck fits, your misdirected hostility and your array of anti-inspirational quotes, headlined by Phil Kessel’s legendary oration: “No one is not trying.” If your season got any less attractive, Paulina Porizkova would marry it.

Here’s what made this year so special: You didn’t owe us this, Leafs. Since 2012, you’ve spoiled us with one epic flame-out after another.

Three years ago, you cratered so spectacularly that your own GM described the collapse as “akin to an 18-wheeler going right off a cliff.” Two years ago, you blew a 4-1 lead in Game 7 of a playoff series with just 11 minutes to go. Afterwards, centre Nazem Kadri said, “We understand we kind of gave it away a little bit.” Which is like saying pizza is kind of delicious a little bit.

Last year, you provided for us again—losing 12 of your last 14 games and responding in what seemed like the Leafest Way Possible: by giving coach Randy Carlyle a two-year contract extension. Terrible job, Randy! Keep up the lousy work!

But somehow things got even Leafier! Carlyle guided you to a playoff position at the mid-season mark, so naturally you fired him. Peter Horachek was named the interim coach—and you started losing. Oh, how you lost! You failed to win games in a Dr. Seussian range of ways: not in the west, not against the best; not at the Flames, not in 10 games!

(I happened to be re-reading The Road during your franchise-record losing streak. When depictions of a post-apocalyptic landscape devoid of life and hope got a little hard to take, I’d turn off the TV and pick up the book.)

To think: It was only last summer that president Brendan Shanahan declared that your team was “built to win right now.” To be fair, he didn’t specify what you were built to win—turns out it was a futility contest of some kind, or possibly a lifelong gypsy curse. Many Canadians outside Toronto feel a warm sense of Shanafreude in the misfortunes of the Leafs’ president.

Meanwhile, GM Dave Nonis has tried to tout the upside of the raging tire fire he built. Specifically, he has been spinning his team’s lousy record as a “good opportunity” for young players—so “we can put some new blood in our organization.” This is like a contractor caving in your roof and selling you on that killer view of the Big Dipper.

But no one has been better at being bad than Kessel, who’s had an annus horri-phil-is. The $8-million winger has scored only a handful of even-strength points since New Year’s. He ranks among the worst plus-minus players in the league. I watched him during last Saturday’s game in Ottawa. He floated around. He made quarter-hearted attempts to win the puck. Above all, he avoided body contact the way Tim Burton avoids a hairbrush.

What’s next for the Leafs? With a handful of games remaining, do they have any surprises left for us?

There’s still time to play a game in street clothes. But I’m betting they save their next big moment for the off-season—when they win the NHL draft lottery, select Connor McDavid and then watch as the can’t-miss phenom instead decides to play semi-pro volleyball in Turkey.

Until then, thanks for the memories, guys.