The rise of the death doula 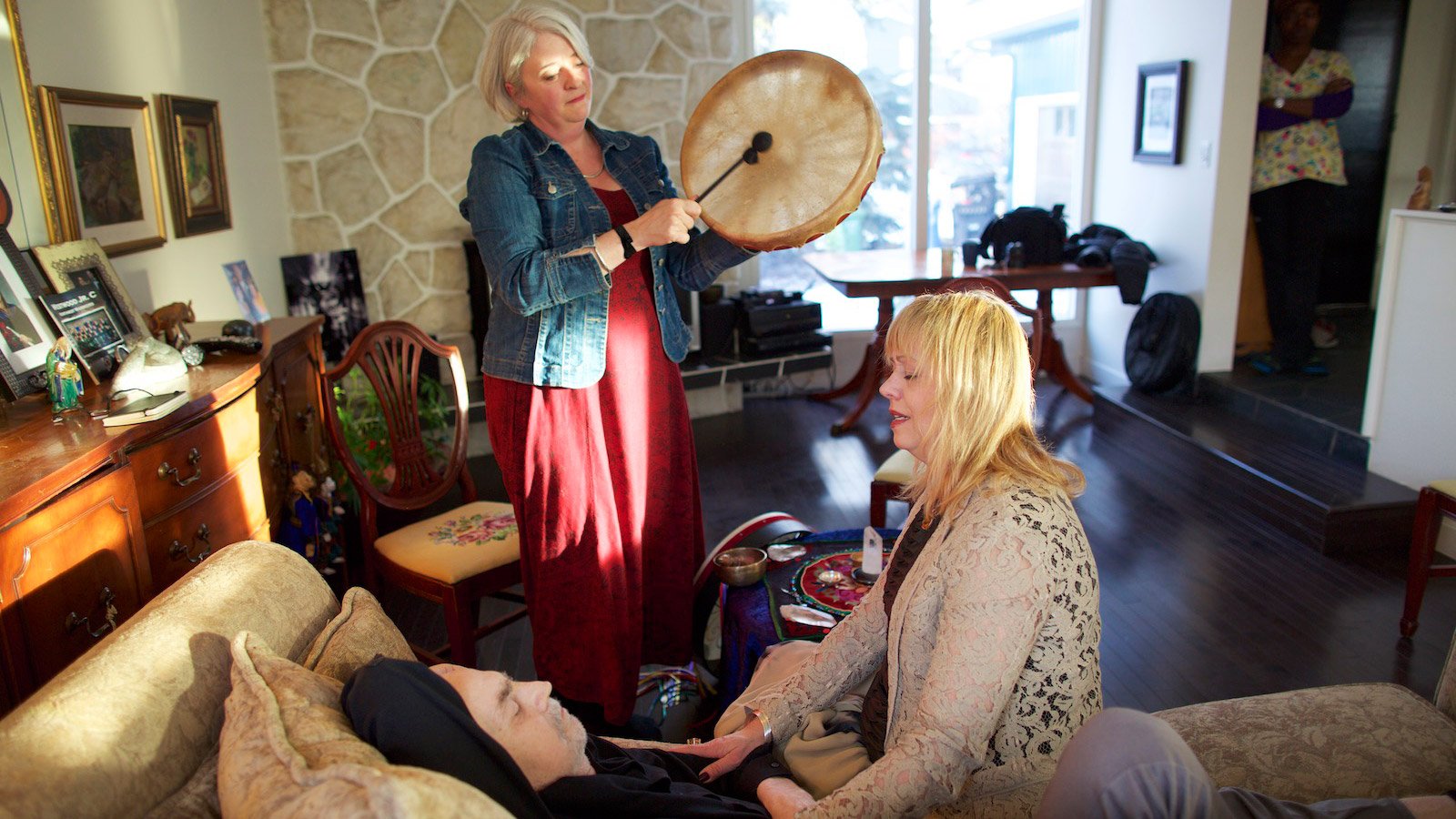 For most of his adult life, Rick Buck never imagined he’d make it to his 60th birthday. The first time he was diagnosed with cancer was during a routine teeth cleaning in December 1990. His dentist told him he had advanced tongue cancer. A second opinion confirmed it, and the doctor told Rick, then 35, and his wife, Kathy Fedori, the cancer had likely ravaged Buck’s lymph nodes, and he wouldn’t make it through the month. All Fedori could think about was their unborn baby–she had just found out she was a couple of months pregnant with their second child. On the way to the hospital for Rick’s emergency surgery, the couple and their toddler stopped to get what they thought would be their last family photo–one they also planned to use for Buck’s obituary.

Now 60, Rick’s friends and family call him “the miracle man.” He beat that cancer and, in spite of all the other sicknesses he has developed over the last 25 years—pancreatitis, tumours on his spine, a hole in his lung, prostate cancer—he has tried to live a normal life. He continued working as a chartered accountant in Calgary and playing the guitar in his spare time until he collapsed last May. His prostate cancer had metastasized to his liver. While Buck and Fedori have long lived in death’s shadow, they never really accepted it until last month, when Buck had to start using a wheelchair. “I’ve been on this journey toward death for decades,” Buck says. “I hadn’t really faced it or let it debilitate me, until now.”

Buck and Fedori decided to call Sarah Kerr, who had worked with a friend of theirs who died last year. Kerr practices death midwifery and is one of a growing number of people in Canada calling themselves death midwives–or death doulas. Kerr sees her job as supporting people, physically and spiritually, throughout the process of dying. The first time Fedori met Kerr, she was drawn to her energy, and decided to hire her right away. “It was instinctual—I saw something in her that made me feel like I could be courageous through Rick’s death,” she says. “Sarah taught us empowerment in a way we had never heard from within the medical community.” Fedori and Buck see Kerr’s services as a spiritual supplement to the medical services they already use, such as a live-in palliative care nurse, and frequent check-ups with their oncologist. Fedori isn’t bothered by the fact that Kerr’s profession is unlicensed. “She’s a pioneer in this industry.”

Kerr says her goal is to get people back in touch with death in a way that our society has lost. “As the Baby Boomers get older, we are yearning for creative ways to reclaim death. We are also watching our parents die, and we want to regain control of the process. And that’s where I come in.”

Kerr, who is 48 and started her company, Soul Passages, in Calgary last year, says she has always had an interest in the ways society responds to death. It wasn’t until she completed her Ph.D. work on shamanistic rituals at the California Institute of Integral Studies in 2012 that she decided to turn her curiosity into a career. So far, she has worked with a dozen clients, mostly through word-of-mouth referrals and some advertising on social media. Like Buck and Fedori, her typical clients are people who consider themselves spiritual, but do not adhere to established religious traditions.

Before working with Kerr, Fedori says she and her husband had discussed death with their doctors, friends and religious leaders. “I’m so grateful for that, but I needed something more specific,” says Fedori. “I’m living everyday with a dying husband, and there’s very few, if any, people who talked about that in a way that added something to my life.”

Kerr’s list of services includes counselling sessions, forgiveness rituals and at-home funerals, offered in person or by Skype. Her fees range from $100 per hour to around $5,000 for multi-day services. Over the last month, she has conducted counselling sessions with Buck’s family, as well as three healing ceremonies. These ceremonies can include drumming circles, chants and rituals meant to bring comfort to the dying person and those around them. “Indigenous traditions in particular contain an awareness and relationship with nature and spirituality that we’ve forgotten,” she says. But there is no set of formal guidelines to follow, giving Kerr the freedom to tailor her services to what clients want.

Before his first ceremony, Rick wasn’t so sure he would enjoy it. “As an accountant, coming from a somewhat conservative environment, I didn’t know what to expect. But there’s something about the drumming and the rattles that soothes and relaxes me.” Some of his friends and family question why he does this. “They think it’s a bit smoke and mirrors, but to me, it’s actually pragmatic and realistic. There’s no BS here. Somehow it just works.” 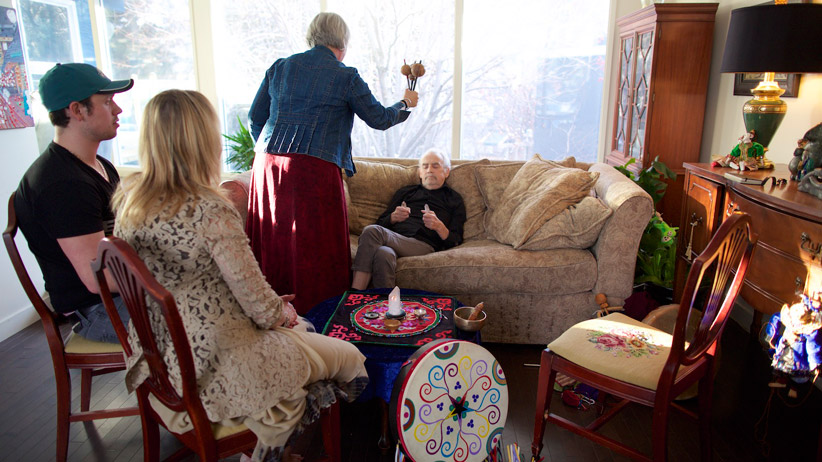 Because it is such a new field of study and practice, it is difficult to say exactly how many death midwives are practising in Canada. Kerr knows 10 or so women who practise it full-time. There’s a patchwork of programs across the country offering courses on alternative ways to deal with death, including the contemplative end of life program at the Institute of Traditional Medicine in Toronto.

In Baddeck, N.S., Cassandra Yonder has considered herself a death midwife since 2009, after she graduated from the Final Passages home-funeral guide program in Sebastopol, Calif. Unlike Kerr, her business is at a standstill. “Looking back, it’s crazy to think I could have made this into a business in a remote area with a small population,” she says. “I just don’t think people here are ready for this.” In the meantime, she runs the Death Midwifery in Canada Facebook group, which has more than 1,000 “likes.” She also speaks with Nova Scotians by phone, for free, about legal steps they need to take after someone dies at home, such as getting a certificate of death.

Kerr receives many similar requests, and hosts monthly information sessions on death midwifery at a community centre for a fee of $20. In February, more than 70 people showed up; she expects 100 people to sign up for March. People, mostly women, come to learn how they might turn it into a career, or tack the practice onto an existing one. Last month, a lawyer and an engineer wanted to know how they could work as death midwives part-time. Kerr says, “People come up to me and say they are relieved they can talk about death in an open way, like: ‘Finally, I don’t feel like a freak for being interested in this.’ ”

For Rochelle Martin, a registered nurse at Brantford General Hospital in Brantford, Ont., who completed the Beyond Hospice online funeral-guide course out of Austin, Tex., death midwifery complements her medical training in dealing with patients who die in hospital. She also consults with families who are looking to perform funerals at home. “As people are wanting to get back in touch with our communities, we will start seeing people questioning the process of handing over the bodies of our loved ones to strangers and faceless institutions, when we can do it ourselves in a cheaper, meaningful way,” she says.

At the beginning of March, with Kerr at their side, Buck and Fedori hosted a gathering to celebrate Rick’s life and to have an open discussion about his coming death. A few of their friends declined their invitation, saying they weren’t comfortable. In the end, 40 people showed up. “I knew such an event would be scary for a lot of people—it’s even scary for me,” Fedori says. “But we wanted to find the love and light in death.”