Why some people in Quebec are cutting up their cash

It makes no economic sense. But that hasn't stopped shopkeepers and locals in Gaspésie, Que., from carving up money to create a local currency. 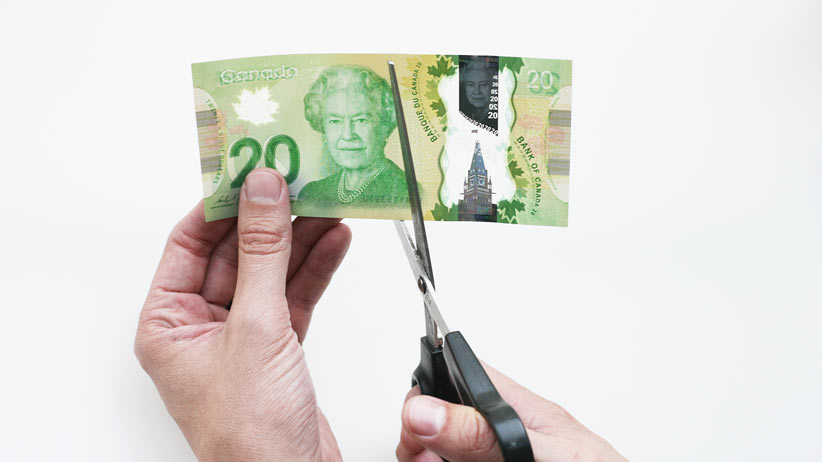 Martin Zibeau has about $100 worth of Canadian money in his wallet, except all of the bills have been cut in two. He can’t use any of the half-sized tender at big-box stores, nor can he deposit them in his bank account. And that’s exactly the point.

On the Gaspé Peninsula in eastern Quebec, a group of locals and small-business owners have begun to accept an alternative currency—one where $5, $10, $20, $50, even $100 bills, get cut in two, ostensibly reducing their value by half—as a means to promote the local economy.

Here’s how it works, or, at least, how locals argue it’s supposed to: When someone buys clothes at a Wal-Mart, Zibeau explains, there’s no telling how much of that money will be reinvested in the community. But with stores and locals accepting the cut-up bills, a currency they’ve dubbed the “demi”—French for half—that money can only be spent locally. And because banks don’t accept half a $20 bill, the money would be reinvested right away and not pile up at home (perhaps out of fear that storeowners might just stop accepting the half-bills). This would help keep the economy rolling.

If it sounds like the kind of idea thought up after pints at a bar, that’s because it was. Its origins date back to April, when a group of locals and a visitor from France were chatting at Le Naufrageur microbrewery, in Carleton-sur-mer, Que. Zibeau and the others at the table figured that cutting Canadian bills in half would serve the purpose of a local currency and they wouldn’t have to worry about counterfeiters.

Getting people to jump aboard isn’t always easy. “Most people, their first reaction is: ‘What is this?’ and they’re confused,” Zibeau says. “I don’t think anyone has said: ‘No problem. Give me a pair of scissors.’ ”

It’s not illegal to cut Canadian bills in half, though it is frowned upon by the Bank of Canada. Some shop owners have even talked about writing their stores’ names on demis that pass through their possession to show how far the half-bills travel, though this, of course, would mean further defacing Canadian currency (such as when Canadians were “Spocking” their $5 bills in memory of Leonard Nimoy).

Then there’s the obvious fact that for the average consumer, cutting one’s money in two makes no sense. Having “40 demis” as opposed to a crisp $20 bill greatly limits the selection of where one can shop. The money can’t go toward a mortgage, retirement savings, a child’s education fund, or pretty much anything but a handful of local stores.

“It’s completely illogical, from an economic point of view,” says Joële Yoja, who started accepting demis at her clothing store La Girafe Bleue just this week. So why would anyone purposely cut their own money in half? “It’s an activist gesture: ‘I’m cutting this $20 that I earned as a gesture that now, it can only be used in local business. I’m committed to putting that into our own [local] economy.’ ”

However, Yoja hopes to hire her first employee later this year, and she knows it would be a hard sell to get new staff to accept “demis” as wages.

It’s not an idea without precedent. In 2003, a high school teacher in southern Germany wanted to teach students about finance, so he invented the chiemgauer, which has a value pegged equal with the euro. Twelve years later, the alternative currency is accepted at hundreds of businesses around the Bavarian city of Rosenheim-Traunstein, and several regional banks help to manage the exchange.

And then there’s Ithaca, N.Y., once home to a local currency called the Ithaca Hours, which debuted in 1991. “Ithacash” has since evolved into Ithaca Dollars. This summer, city officials were on hand for an unveiling of a redesigned $5 Ithaca (i$5) bill. Its value is pegged at US$1, though those in the community were reportedly able to exchange US$100 to get i$125 in return. The bonus cash for switching currencies incentivizes the use of Ithaca dollars for tourists, though it surely complicates matters if one imagines multiple cities across America devaluing their own municipal currencies.

At the place where the “demis” was conceived, the owners of the microbrewery don’t even accept the butchered bills. “It’s complicated,” says Christelle Latrasse, one of the microbrewery’s owners. They can’t pay their staff in demis, nor can they deposit them in the bank. “I like the idea, and I’m looking for a simple way to introduce it, but I haven’t yet,” she says.

In the meantime, Zibeau is compiling a list of stores that accept the demi, which he publishes online. There are about a dozen right now, however, storeowners could very well stop at any moment, if they so chose.

Gérard Mathar has a more than a hundred demis tucked away in a box at his foraging store Gaspésie Sauvage, which sells a variety of wild mushrooms, herbs and plants. There’s no one else in his area accepting demis—yet. The fact that the cash is sitting unused doesn’t bother him in the slightest. On the contrary, he wishes the currency had a logo he could put on his website, so customers could see he accepts the demi. He also plans to add the demi on his price list, next to the Canadian prices.

Mathar even jokes about opening a stock exchange. “Closing today on the Gaspésie Stock Exchange: $1 is two demis.”