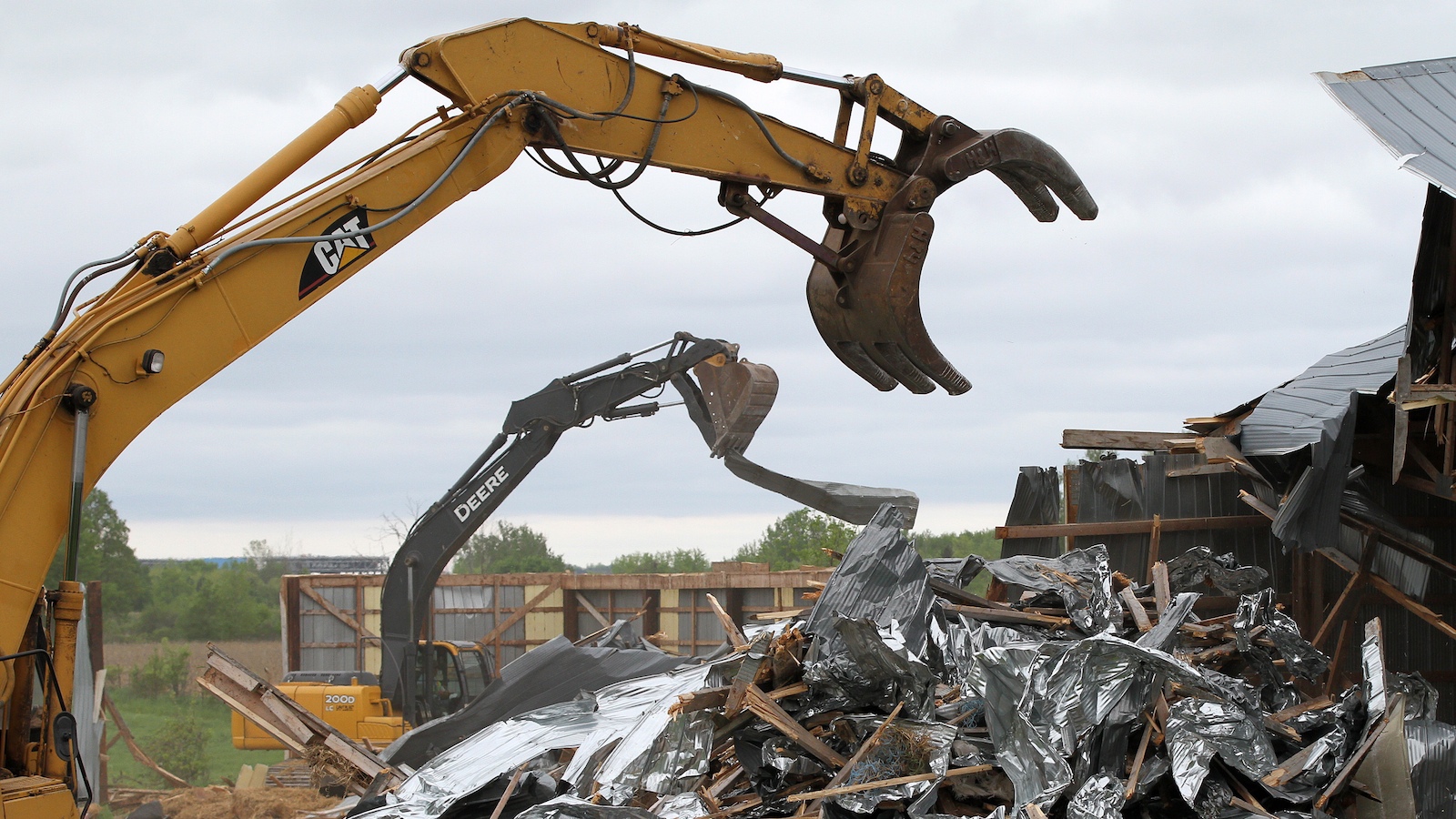 An Ontario farmer who has been fighting to save his historic land from the Canadian Forces—a battle bolstered in recent months by tens of thousands of online supporters—is now staring at a demolition zone. With military police officers standing guard, a yellow excavator arrived this morning on Frank Meyers’s former property in Quinte West, Ont., ripping down his old barn in a matter of hours and dashing any faint hope that the federal government would alter its plan and return his expropriated farm. “How would you feel?” Meyers asks, when reached by Maclean’s. “They’re tearing the buildings down right now.”

By noon, the barn was a heaping pile of rubble. The excavator is now razing other nearby sheds and buildings, making way for a massive, multi-million-dollar construction project that has been in the works since 2006: a sprawling new headquarters for JTF-2, the military’s elite Special Forces unit. “I’m done,” says Meyers, now 86. “They want to crush the Meyers family. May the curses of all money fall upon them now and forever more.”

Meyers wasn’t even home when the excavator first showed up. He was in Belleville, 20 km away. “We didn’t know anything about this, they just showed up,” says his wife, Marjorie. “I saw somebody out here taking pictures, so I went out to see what was going on. The roof of the barn was only half there.”

All signs pointed to today’s dramatic development. Construction workers visited the property last Wednesday, installing a concrete barricade and delivering two large shipping containers in preparation for demolition. Although the Department of National Defence would not disclose when the work would begin, a spokeswoman confirmed that the site was “secure” for destruction, a “standard practice to ensure public safety.”

With demolition now under way, Meyers can do little else but watch it unfold. “I can’t do nothing,” he says. “The whole system is rotten and corrupt.”

Although small groups of supporters did stage numerous protests over the winter—including a February rally with NDP MP Paul Dewar, who pressed the government about Meyers’s story in the House of Commons—no protesters were at the property when demolition began.

Meyers has been dreading this moment for eight long years, since the day a federal bureaucrat first knocked on his door to ask if he was willing to sell his land. As Maclean’s first reported, he was one of numerous local landowners being forced off their properties to accommodate the planned expansion of CFB Trenton, the country’s largest and busiest air force base. But while most neighbours eventually reached a deal with the federal government, Meyers vowed to never leave his beloved farm, no matter how much money Ottawa offered to pay. As he famously proclaimed (more than once): “What are they going to do, send a task force in to take me out?”

Meyers’s tough stance didn’t garner much local sympathy. Political leaders, including Quinte West Mayor John Williams and Conservative MP Rick Norlock, championed the arrival of JTF-2 because the air-base expansion will inject millions of federal dollars and hundreds of well-paying jobs into an economically depressed region. Moving Canada’s elite commandos from Dwyer Hill to Trenton is also being touted a major tactical upgrade, providing the troops with instant access to airlift for rapid deployments. “The vast majority of my constituents—and when I say the vast majority, I’m talking the vast majority of my constituents—want this to go ahead sooner rather than later because they know the economic implications,” Norlock told Maclean’s last year. “The good of the many, in this particular case, outweighs the good of the few.”

But the Meyers land is more than just a dairy farm. It’s a slice of Ontario heritage.

The direct descendant of Capt. John WaldenMeyers—a loyalist war hero and founder of nearby Belleville—Frank farmed a portion of the very same plot of land bestowed on his famous forefather by King George III for his exemplary service during the American Revolution. (Ironically enough, Capt. Meyers was the 18th-century version of a special-forces operative, a crack spy and daring soldier most renowned for leading a late-night raid on the home of U.S. general. To patriot children, he was the bogeyman. If you don’t behave, their mothers would say, Capt. Meyers “will come and eat you.”) Signed in 1798, nearly 70 years before Canadian Confederation, the Crown land patent assigned the property to the Meyers clan “forever.”

Even Stephen Harper sympathized with Meyers’s plight, delaying construction plans for at least a year in the hopes that a fair deal could be reached. “The Prime Minister told me his concerns that he wanted this, as much as possible, to be a negotiated settlement,” Norlock said. “He was aware of the history behind this and the sensitivity that the government should have.” By 2012, however, the government’s patience had run out; Meyers was served with a notice of expropriation that said his land was required “for a purpose related to the safety or security of Canada.” (All levels of government have to the power to expropriate private property, in exchange for “fair market value,” if it’s required for public projects such as highways, hospitals or hockey arenas.)

Meyers hired a Toronto lawyer and filed a last-ditch appeal with an independent hearings officer, arguing, among other things, that the government didn’t actually need his 90 hectares to finish JTF-2’s new headquarters because the other 11 properties it acquired provided plenty of space. Barely a dozen people showed up to listen to Meyers’s tearful plea, and the hearings officer wielded no real authority. Federal officials read her report and went ahead with the expropriation anyway. (The Meyers home, separated from most of the land by a set of train tracks, was not expropriated.)

Although he didn’t own the property anymore, Meyers signed numerous lease agreements with the government that allowed him to continue farming the land (and emptying his barn and sheds) while both sides negotiated the final selling price. But last October—amid news that the final lease agreement had expired, and Meyers would soon be ousted—his story suddenly exploded on social media, triggering a Facebook campaign to “save” the farm that now boasts more than 57,000 supporters.

A few weeks later, Meyers actually agreed on a selling price and signed the final pieces of paperwork—but quickly backtracked, saying he was pressured to surrender and that the deal was null and void. Bolstered by his growing legion of Internet followers (and the few dozen protesters who periodically arrived at his farm, waving Canadian flags), Meyers vowed to fight on, even though he officially lost the land more than two years ago.

When the government cheques arrived in February—totaling $3.3 million, according to one published report—Meyers refused to cash them. He still does. “I don’t want the money, I want the land,” he said last week. “This has got nothing to do with the price. I’ve told them that from the beginning.”