'Right out of the drill manual, Denis!'

To work on the prime minister’s protective RCMP detail is to serve, from time to time, as a photographic backdrop. Officers on the elite team become inured to the flash of strobes and the sight of themselves on the front pages of newspapers—they’re too busy keeping Canada’s head of government safe. Even when they do make the papers, their images are often blocked by some dignitary, or half-cropped from the frame.

But Denis Ling, an inspector in charge of the unit during Pierre Trudeau’s first mandate, was more than mere scenery on Aug. 10, 1973, when Trudeau arrived for a garden party at Government House in Ottawa. The PM had just scooped up his 18-month-old son, Justin, and the child was gazing out from under his dad’s arm, bracing himself against the elder Trudeau’s hip. Denis snapped to salute, and Trudeau responded with one of his inscrutable looks—mischievous yet resolute. It seemed a projection of his enigmatic personality, and the whole tableau was captured for posterity by Rod MacIvor, a young photographer with United Press International.

The now-iconic shot was a career-maker, winning MacIvor a National Newspaper Award and launching him on a path that would lead to the Ottawa Citizen, where he worked for 27 years. “I knew I had a picture to be proud of for some years to come,” he recently told the CBC. “It reminds people of a time and an era and the entire Trudeau period.”

But for Denis, it would carry added personal resonance, recalling his own role in a captivating, tumultuous period of Canadian history, and a connection to the Trudeau family that would bridge generations. The trauma of the October Crisis was fresh in the nation’s memory at the time, he recalls. So was Trudeau’s divisive decision to invoke the War Measures Act. In the photo, Denis sees a leader exerting precisely the measure of authority required: “The fact it became so popular is, for me, recognition of Pierre Elliott Trudeau as the prime minister Canada needed at the time.” 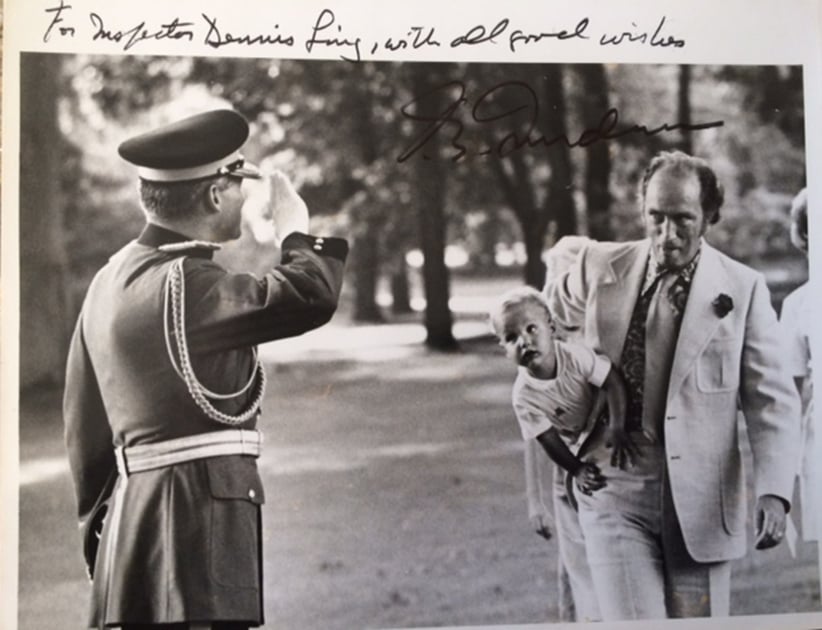 For the Trudeaus, a cadre of cordial Mounties were members of the family. (Courtesy Dennis Ling)

As for that salute, well, Denis got a rough time about it from colleagues, many of whom assumed he’d positioned himself strategically to make the moment happen. “Right out of the drill manual, Denis!” one jibed. Far from it, Denis insists. He’d been serving that day as an aide-de-camp to Roland Michener, the governor general, kitted out in formal garb. “I just happened to be on the spot when the prime minister and his wife showed up,” he says. “It was a total surprise.” (Indeed, Insp. Alex Sinnett, his successor on the prime minister’s detail, was cropped out of the edition of the photo that moved on newswires.)

He kept a yellowed copy of the Citizen bearing the photo, and it never fails to bring him a surge of emotion. He’s not the only one. When Denis’s son Jeff, an officer with the Belleville, Ont., police department, brought a print of the picture to one of Justin Trudeau’s leadership campaign stops in February 2013, the future PM teared up. The shot carried him back, he later explained to the Toronto Star, to a time when a cadre of cordial Mounties were members of his family. “The way my dad was looking at him, the way I was looking at him. It encompassed so much in terms of the respect for them. That was such a big part of my life.” — Charlie Gillis