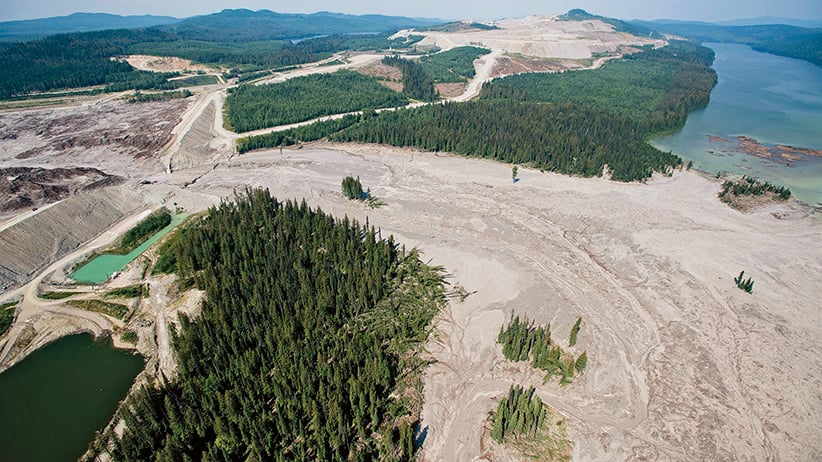 VICTORIA – The construction of a mine tailings pond on top of a sloped glacial lake at British Columbia’s Mount Polley mine weakened the foundation of the dam and was akin to loading a gun and then pulling the trigger, a report on the disaster concluded.

The independent, government-ordered report released Friday said the spill of 24 million cubic metres of silt and water into nearby lakes and rivers was caused by an inadequately designed dam that didn’t account for drainage and erosion failures associated with glacial till beneath the pond.

B.C.’s Energy and Mines Minister Bill Bennett immediately ordered B.C.’s Chief Inspector of Mines to require all operating mines with similar tailings ponds to confirm what kind of foundation material their dams rest on by June 30.

There are currently 98 permitted tailings storage facilities in the province with 123 dams at 60 metal and coal mines in B.C.

The pond at the Imperial Metals Corp. (TSX:III) open pit copper and gold mine burst without warning at 1 a.m. last August 4, hours after workers had been at the foot of the structure unaware of the impending devastation.

Norbert Morgenstern, chairman of the panel that investigated the spill, said evidence indicates that the glacial lake deposit under the foundation of the dam weakened as the tailings pond increased in size.

“The design did not take into account the complexity of the sub-glacial and pre-glacial geological environment associated with the perimeter embankment foundation,” he told reporters gathered for the release of the report.

“But if constructing unknowingly on this upper (glacial) deposit constituted loading the gun, building with a steep slope … pulled the trigger.”

Morgenstern said the two factors together constituted the root cause of the failure.

He is among a panel of three geotechnical experts appointed by the province a few weeks after the disaster to investigate the cause of the collapse and the role of government regulation and oversight.

Bennett said he was relieved the cause of the disaster was pinpointed in the report.

“Apparently, no one knew that the material was there or perhaps they knew it was there but they didn’t understand the characteristics of it, and that in and of itself caused the wrong dam to be designed and built,” he said. “The loaded gun is under the ground.”

He said the government will act on the recommendations, including the requirement that all operating mines with similar facilities establish an independent tailings dam review board that provides third-party advice on design, construction, operation and closure of the facilities.

“This obviously was an unprecedented, disastrous event that we must do everything we can to make sure it never happens again.” Bennett said.

“It’s a failure, I believe, of our regulatory process. It’s a failure of the deregulation that the B.C. Liberals brought into play in 2001 when they were first elected.”

Last month, B.C.’s chief inspector of mines allowed Imperial Metals to start repairs on the tailings pond. But Bennett said Friday there was no set date for the reopening of the mine.

“We are going to take the time that is necessary to review the application we have from the company and certainly the use of the existing tailings-storage facility is not something that is planned for any time soon,” he said.

Bennett said the government is awaiting the results of two other reports being conducted by the Chief Inspector of Mines and the Conservation Officer Service.

A report released in November said the cleanup from the dam’s breach will take many years to complete.

The company said the panel report stated the weaker glacial till was found eight metres below the dam’s surface, much deeper than assumed by the design criteria.