Dryden, 47, who had terminal pancreatic disease, suffered fatal injuries in a suicide attempt 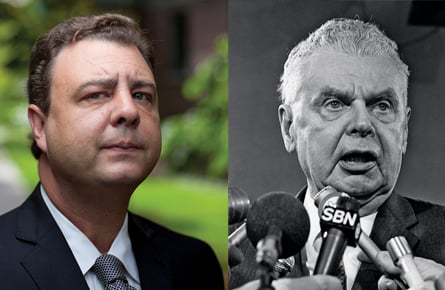 He blamed decades of alcohol abuse for the illness.

“I didn’t have a bad life,” he told The Canadian Press last week in his last interview. “I basically ended up killing myself.”

Dryden, who bore an uncanny resemblance to “The Chief,” grew up in a Toronto family of privilege as the son of prominent federal Liberal Gordon Dryden. About five years ago, however, a cousin told him it had long been a quiet family rumour that Dryden’s mother, Mary Lou Dryden, had an affair with Diefenbaker that led to his conception.

In a stunning revelation, DNA tests confirmed Gordon Dryden was not his biological parent.

“For somebody who knows who their father is, it seems kind of strange,” Dryden said at the time. “But I went for 42 years thinking I was a Dryden, and I just found out…that I’m not.”

The bombshell sparked his elusive quest to prove his parentage definitively. It also caused an ugly rupture with the Drydens. The family kept him from his ailing mother, and hid the death of his father from him for eight months.

Unan, who met Dryden 20 years ago and was with him when he died, described him as sensitive, caring, a wonderful friend, but also “very much a lost soul,” she said.

“He was searching most of his life for his identity,” Unan said. “He truly didn’t know who he was.”

Dryden said his mom, a staunch Conservative and known confidante of Canada’s 13th prime minister, admitted to him she had seen Diefenbaker privately around the time he was conceived in late 1967 or early 1968 _ a few months after she married Gordon Dryden. The former prime minister would have been 72 at the time; she would have been in her mid-30s.

She also told him his father’s name was John, Dryden said.

History books record the twice-married Diefenbaker as childless, and Dryden found little appetite to change the official narrative. Known Diefenbaker relatives refused to co-operate, but Dryden managed to obtain a DNA sample from one of them, which proved enough of a match to convince him of the relationship.

“I don’t have any doubts,” Dryden said last week. “But nobody is going to say it.”

His belief was bolstered when DNA tests showed he was related to the Goertzens in Saskatchewan _ three brothers with whom he had no known connection.

Independently, the brothers had previously learned that their father, Ed Thorne, was the son of Mary Rosa LaMarche, Diefenbaker’s housekeeper in Prince Albert, Sask., in the late 1930s. Her daughter would tell them Thorne was the product of a dalliance between LaMarche and Diefenbaker, which would make them the former prime minister’s grandchildren.

When one of the brothers, Lawrence Goertzen, read about Dryden, he made contact three years ago. Two of the siblings and Dryden did DNA tests. The result showed with near certainty that they had an uncle-nephew relationship.

Two weeks ago, an ailing Dryden went out to Saskatchewan to meet the Goertzens for the first time. They visited Diefenbaker’s house in Prince Albert and the Diefenbaker Canada Centre in Saskatoon along with his grave.

“George was looking for a sense of connection there,” Goertzen said.

Goertzen, who was surprised at how much alike he and Dryden were, described his putative uncle as a searching soul.

His inability to get Diefenbaker, who died in 1979, to recognize the relationship _ former prime minister Pierre Trudeau was open about fathering a daughter in later life _ left Dryden with a sense of something missing that he needed to find. He always insisted there was nothing in it for him, beyond certainty about his parentage.

“The best possible present that George could ever have gotten was an acknowledgment that Diefenbaker was his father,” Goertzen said from Saskatoon.

“I get it: People don’t want to tarnish Diefenbaker’s name (but) somebody’s covered something up.”

Dryden, who never married, recently developed a close relationship with the sister of “Wheel of Fortune” personality Vanna White in South Carolina. Their father, Herbert White, treated him like a son, he said, for which he was grateful.

“I miss her and what could have been,” he said wistfully.

As he counted down his final days, Dryden said he wanted to warn others of the dangers of alcohol abuse, and said he had no plans to suffer.

He chuckled at the notion of a “Diefenbaby Dies” headline. His tombstone in Toronto, he said, would carry both the Dryden and Diefenbaker names.