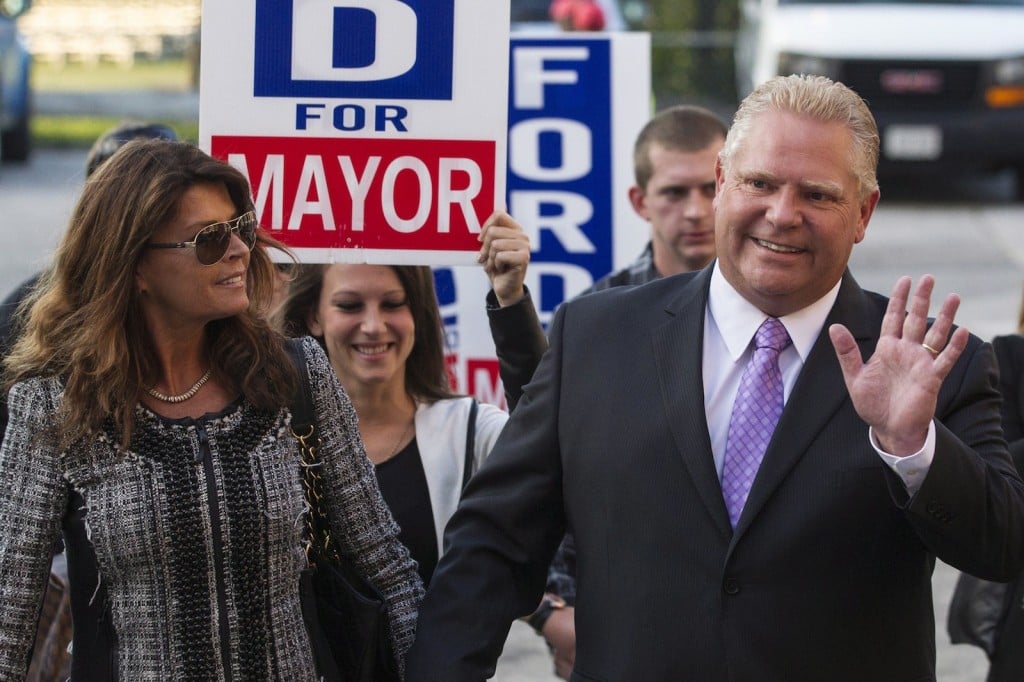 TORONTO – Rob Ford wasn’t there in person, but the controversial Toronto mayor’s presence loomed large Tuesday night as his older brother firmly took his place in the city’s mayoral race.

A rowdy crowd served up loud opposing cheers and jeers as Doug Ford faced off against his main rivals with many of the same promises offered by his famous brother.

The siblings switched spots in the municipal competition earlier this month after it was announced that Rob Ford had an abdominal tumour which was later diagnosed as a rare and aggressive form of cancer. The mayor was released from hospital on Tuesday afternoon after undergoing his first round of chemotherapy.

“Folks I’m in this race for two simple reasons — I love this city and the people that live here,” Doug Ford, who is currently a city councillor, told the raucous crowd Tuesday night.

“Four years ago folks you stood behind my brother and you voted for change, and together we did what we said we were going to do.”

Ford referenced his brother in many of his arguments, portraying himself as a partner in the municipal measures the mayor has touted as his achievements in the past.

Ford also peppered his comments with appeals to the everyman, just as his brother does, despite the pair coming from an affluent family.

The new mayoral candidate did, however, also have to deal with the same sort of questions his brother has been peppered with.

When asked repeatedly if he would march in Toronto’s Pride Parade if elected as mayor, Ford wouldn’t give a straight answer, saying only that he had been “down to the pride parade” in the past.

Rob Ford has famously missed the Pride Parade for all his years in office, saying it conflicts with an annual family cottage weekend.

Tuesday’s debate featured a lively audience which heckled and applauded the candidates throughout the night. The event was even briefly suspended at one point when a woman in the crowd stood up and made a series of comments. She was escorted out by police.

While local municipal issues dominated much of the discourse, Rob Ford’s scandals were referenced at one point by Chow who recalled reading about the mayor during a trip to China.

“Instead of being proud of our city I saw our mayor on the front page and it was not a good reputation,” she said to a chorus of boos.

The mayor has turned into an international celebrity over the past year due to a series of scandals touched off by reports of a video appearing to show him smoking crack cocaine.

His role as mayor has been largely symbolic since last November, when he was stripped of most of his powers following his admissions of alcohol abuse and drug use during “drunken stupors.”