Digging in to give more: The sacrifices of generous Canadians

From giving up their own businesses to settling for charity-level salaries, here's how Canadians are stepping up

A busy father of four, Sam Jisri was doing well for himself running a clothing store in Mississauga, Ont., and working as a part-time graphic design teacher. But Jisri decided to put his businesses on the backburner last year after learning that thousands of refugees were coming to Canada from war-torn Syria—the country he and his family fled when he was just four.

Jisri, 39, understood the immediate needs of the displaced Syrian families, having travelled to refugee camps between 2011 and 2013. “They stayed in the back of my mind. When I heard they were coming, I thought, ‘This is the time to help and take initiative.’ ”

He started the Syrian Active Volunteers (SAV) group on WhatsApp, launched a clothing drive and set up a 24-hour, toll-free Arabic hotline.

Within weeks, SAV had upwards of 600 members, was fielding hundreds of calls per day and had a warehouse full of clothing, strollers, formula, diapers, flour, rice and more.

Jisri remembers one December night when he and two volunteers raced to a hotel where 200 refugees had just arrived. It was a chaotic scene. “It was a new life for them. They didn’t know what was happening,” he said. Jisri spent the night helping families check in before eventually collapsing on the lobby couch.

Volunteers work in shifts from 9 a.m. to 9 p.m., translating and shuttling families to and from medical appointments. They even put on “fun days” with games and activities for Syrian children not yet enrolled in schools. 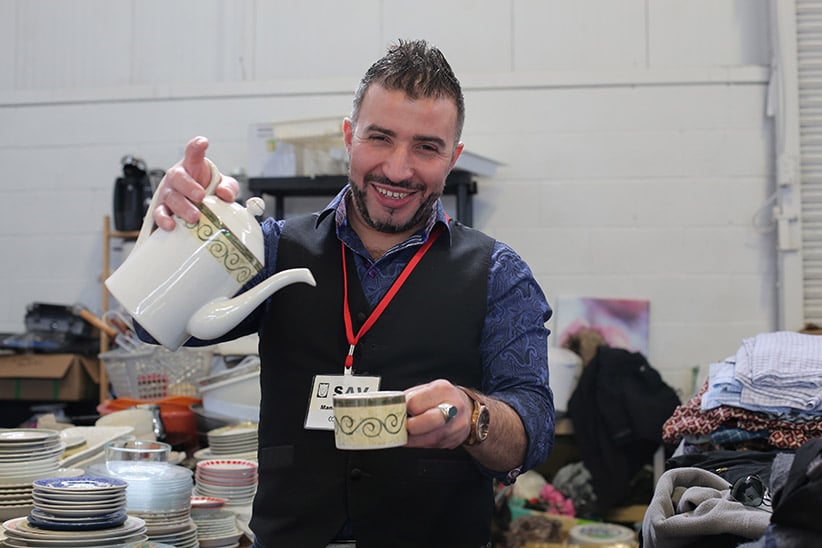 Sam Jirsi, who immigrated to Canada from Syria 25 years ago, put his business on hold to help re-settle Syrian refugees. (Photograph by Matthew Higginson)

For Jisri, who spends upwards of 70 hours a week with SAV and often works until 2 a.m., it’s been a demanding but rewarding experience. “The hardest thing in my life right now is dealing with taking time off from my kids, my wife, my family. I haven’t visited my mom for the past six weeks.”

This winter, Jisri will close his retail business to focus on SAV. “This thing took so much of my time that I had to leave employees [at my store] all the time,” he said. He’s also dipped into personal savings and is considering selling one of his cars. Jisri’s wife, a preschool teacher, helps cover household expenses, and since their children are still very young, they’ve decided to postpone saving for university. Jisri hopes to find a full-time job that will allow him to focus on SAV during evenings and weekends. “I might have to go back to work for someone after 20 years working for myself.”

Jisri is switching career paths to help others—a dream that stops many short when they consider how they’ll manage day-to-day expenses and save for the future. “Satisfaction is endless in this work,” he says. “It is a good cause. It is karma. It will pay me back one day, somehow.”

For Sara Rose-Carswell, a 46-year-old lawyer from Ottawa, work has always been about more than acquiring material goods. “I see [money] as a means to an end and not an end in itself,” she says. She recently returned to Ottawa from Washington, D.C., following a three-year stint at the HALO Trust, an non-governmental organization that clears land mines overseas. As acting president at the group’s American offices, she earned a charity-level salary. “It was a job I would have done for free—it was such a good cause.” Renting out the family home while living abroad on a modest budget allowed Rose-Carswell to continue paying down the mortgage. “I wouldn’t say we were hard done by and we have earned decent livings, though I don’t earn the income some other lawyers do, and I am happy with that.”