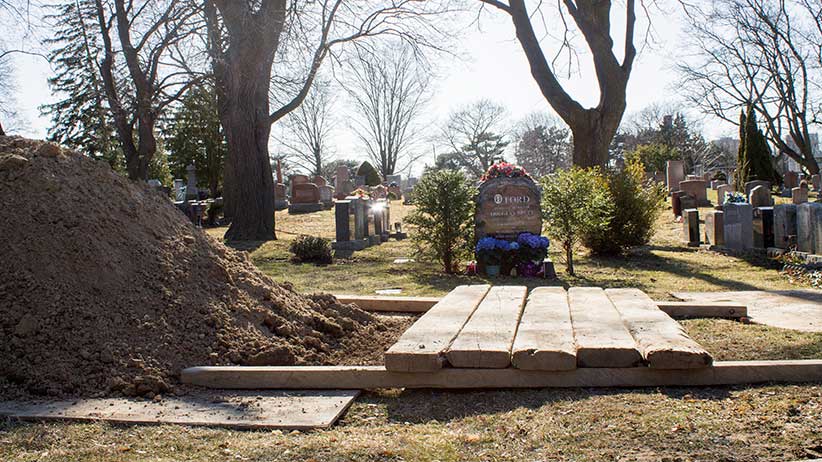 Working-class citizens were Rob Ford’s most solid supporters. At his wake on Monday and Tuesday at Toronto’s City Hall, people in construction, meat processing and parcel delivery were typical visitors, paying their respects to a man who cared ferociously about public transit, municipal expenses and constituents’ car bills. Fittingly, working-class people were the ones to lay him to rest.

Three men the size of football players, with tractors, shovels, rakes and a backhoe, dug Ford’s grave on Tuesday morning at Riverside Cemetery, four kilometres from his home in Etobicoke, a district of Toronto. The diggers, aged in their twenties to fifties, marked a plot with blue paint in front of the grave of Rob’s father, Doug Bruce Ford Sr. (Although the former mayor never seemed to mind media appearances, the cemetery’s corporate affairs office requested the diggers not be named or interviewed.) The backhoe operator lowered stabilizer legs, as the springtime ground was soft. Over the groaning engine, he listened to the spotter shout directions, clawing back the dirt and dumping it on slabs of plywood.

“Okay, hold it!” the spotter called, then stuck a measuring tape into the grave. Not yet eight feet deep, the digging continued. Within half an hour, the final displacement was eight-by-three by eight-and-a-half feet, large enough to hold the “vault,” a concrete structure that protects the casket.

Preparation was only half done. A rainstorm had hit the city the previous day, so the diggers used tractors to pick up branches in the path of the funeral procession. In the equipment garage, they opened a new tent from a cardboard box labeled “Instant Canopy” and practised setting it up. “Can you give it a yank?” one asked another. The tent was designed to give shade to the family during the burial—Ford’s grave isn’t next to any trees, although many people request plots beside majestic oaks or elms without realizing the diggers must then cut through the thickest roots and kill the trees.

In a minivan, a mechanic arrived with fold-up chairs. The diggers began to wipe them down with rags, but when they patted the cushions and released clouds of dirt, they decided they needed a pressure cleaner. “Want me to get the air?” one asked. “Sure, that’ll work,” his boss replied. Also in the garage were rolls of turf, which covered the mound of dirt until it was time to fill in the grave.

The cemetery was groomed but not synthetic-looking, with the odd mismatched patch of grass and wayward wreath, and located next to a Pizza Hut.

The burial service—following the public funeral that stopped traffic in downtown Toronto—wasn’t be elaborate, either. As the diggers cleaned the chairs, one took a closer look at them. “I have these chairs at home,” he said. “I think they were $10 each.”