Dion: 'We unequivocally condemn the behaviour of North Korea' 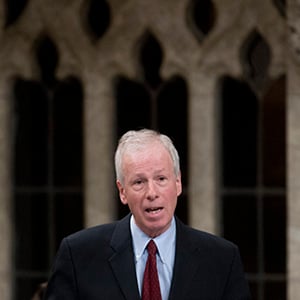 iLiberal MP Stephane Dion rises during Question Period in the House of Commons Thursday May 1, 2014 in Ottawa. THE CANADIAN PRESS IMAGES/Adrian Wyld

OTTAWA — Canada is condemning North Korea for what Pyongyang says was its first test of a hydrogen bomb.

Foreign Affairs Minister Stephane Dion initially took to Twitter to express Canada’s outrage about the “reckless behaviour” of North Korea, then followed that up with a formal statement.

“We unequivocally condemn the behaviour of North Korea, which today claimed to have detonated a nuclear weapon,” the statement said.

“North Korea’s continued violations of its international obligations pose a grave threat to international peace and security, and particularly to the stability of the region.”

North Korea’s announcement has been met with widespread international skepticism.

But Dion said: “Any nuclear testing by North Korea would be an illegal and provocative action.”

The development has ratcheted up tension between the impoverished pariah state and the rest of the world, and could lead to more sanctions.

Conservative foreign affairs critic Tony Clement called on the government to take a strong stand with its allies, while not losing sight of the severe human rights violations of the Pyongyang regime.

“The regime in Pyongyang continues to be a threat to world peace, and its self-imposed isolation from the rest of the world only serves to further oppress its own citizens,” Clement said in a statement.

Dion said Canada remains engaged with the international community on the issue and “support efforts to forge multilateral solutions to enhance security in the Asia-Pacific region.”