Marc Wabafiyebazu was quietly sent to Montreal earlier this month after standoff between U.S. and state officials 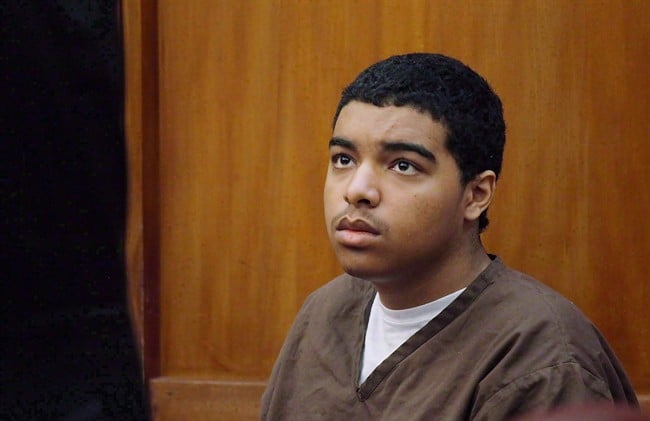 Marc Wabafiyebazu is seen in court during his bail hearing in Miami on May 29, 2015. (Colin Perkel/CP)

A teenager caught up in a double shooting in Florida that left his older brother dead has been quietly deported to Canada following a remarkable standoff between U.S. federal authorities and the state judge who sentenced him, The Canadian Press has learned.

American immigration agents escorted Marc Wabafiyebazu from Miami to Montreal earlier this month where he was reunited with his mother, Roxanne Dube.

Now 16, Wabafiyebazu is back home in Ottawa studying privately for his high school equivalency and reconnecting with family and friends as he relaunches his life shattered by the gunfire in March last year that killed Jean Wabafiyebazu, 18, and another teen.

FROM THE ARCHIVES: How a diplomat’s sons wound up in a deadly drug heist

In exchange, Circuit Judge Teresa Pooler sentenced him to in-custody boot camp, house arrest, and a minimum five years probation to be served in the United States.

What neither Pooler nor prosecutor Marie Mato seemed to have realized at the time is that federal immigration authorities would have no intention of allowing him to serve his probation in the U.S.

“They had not foreseen that at all, which created a very tense situation,” Dube said, her voice choking. “They were beside themselves.”

In late July, as Wabafiyebazu was completing boot camp with flying colours, immigration authorities went to pick him up. State authorities, however, refused to hand him over without Pooler’s consent.

What followed were a series of court hearings at which Pooler and Mato made it clear they would never have signed off on the plea agreement had they known he would be deported immediately upon release.

“The court thought he would be serving five or 10 years of probation here,” Wabafiyebazu’s lawyer, Curt Obront, said from Miami. “The court and prosecutor were displeased that he was returning to Canada so quickly.”

Pooler and Mato also appeared to think Dube had perjured herself in February when she promised to supervise her son’s probation in the U.S.

Dube, however, insisted she had made her promise in good faith and had been fully prepared to stay in the country for as long as her son was required to be there.

“They felt that I had misled the court (but) I couldn’t for the life of me understand where they were coming from. It was very much of a shock.”

To avoid further complications, Dube decided to return to Canada at the end of July, leaving her son in a state known for being extremely sticky about relinquishing its grip on foreign offenders.

For several weeks, Pooler appeared to be exploring every legal avenue to keep the teen behind bars. On Friday, Sept. 2, however, she relented. Wabafiyebazu had adhered to the terms of his plea deal and federal laws took precedence over state laws.

“The court realizing that and having checked the law said, ‘Well, good luck to you, and I hope you learned a lesson from this’,” Obront said. “I’ve been doing this 33 years and I’ve never seen anything quite like this; the whole thing is surrealistic.”

Two days later, agents with Immigration and Customs Enforcement spirited the teen from prison to a secret location. He was flown back to Canada Sept. 6.

Although his probation continues to run in Florida, Wabafiyebazu is free to pursue his life without restriction in Canada, although he remains inadmissible to the U.S. If his probation, which could be reduced to five years, passes without incident, he will have no criminal record. A violation could see him jailed for up to 60 years.

The teen was not ready to speak publicly about his experience as he readjusts to normal life, but his mother believes the rigours of boot camp were good for him and he has grown as a person — even as the six-foot-tall teen lost 50 pounds in the process.

“I really see a child or a young man who wants to make a contribution to society in a good way,” said Dube, who’s now Global Affairs’ director general of the Canadian Foreign Service Institute based in Ottawa.

“It’s a case of someone who has gone through so much and who is more than able and prepared to be an example to other young people.”