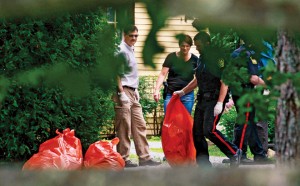 The Saint John Police Force executed a search warrant at the home of Dennis Oland in 2011. (Telegraph-Journal)

Oland has pleaded not guilty to second-degree murder in the death of his father, New Brunswick businessman Richard Oland, whose badly beaten body was found in his Saint John office on July 6, 2011.

DNA expert Joy Kearsey was a scientist at the RCMP lab in Halifax when she was asked to examine the jacket. She completed 11 reports on the case, amassing 1,400 pages of notes.

Crown and defence lawyers have pared that information down to 52 pages for the jury.

Kearsey testified the DNA typing profiles obtained from the jacket matched those of the known sample from Richard Oland. She said the DNA was obtained from two places on Dennis Oland’s jacket: the outside right sleeve and outside upper left chest.

“The estimated probability of selecting an unrelated individual at random from the Canadian Caucasian population is 1 in 510 billion,” she told the court.

A number of other areas of the jacket were tested, but the quantity of human DNA did not meet minimum requirements for further processing, she said.

Dennis Oland had told police he was wearing a navy blazer when he visited his father on July 6, 2011, but witnesses and security camera video shown at the trial show him wearing a brown jacket that day.

The trial is into its 11th week.