Opinion: A growing number of students are finding that the expense and effort of studying to be a doctor may be in vain because they are unable to secure a residency spot 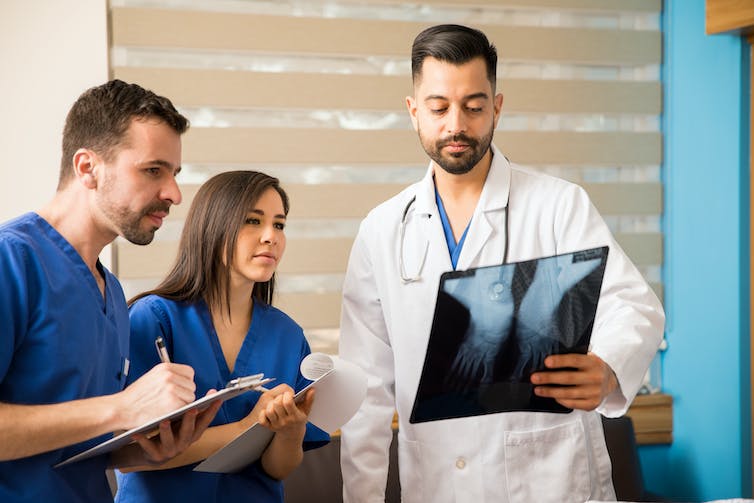 To become a qualified physician in Canada, medical graduates must complete a two- to six-year medical residency. Competition for spots is becoming increasingly intense. (Shutterstock)

Thousands of budding doctors across Canada embark on a critical step in their careers this month—the interview process for a residency spot at a hospital.

The two- to six-year residency marks the final stage of a doctor’s training following six or more years at university supported by thousands of dollars in taxpayer funding, and thousands more in student loans for some.

Yet a growing number of students are finding that all this expense and effort may be in vain because they are unable to secure a residency spot.

Last year, a record 68 students were left high and dry as they went through a match-making process that resembles an elaborate game of musical chairs. Factoring in graduates from previous years, 114 Canadian-trained students did not secure spots.

The number is likely to be even higher this year.

“It’s a situation of grave concern,” says Dr. Geneviève Moineau, president of the Association of Faculties of Medicine of Canada.

“I’m extremely nervous. I think we all are,” adds Kaylynn Purdy, a fourth-year student at the Northern Ontario School of Medicine in Thunder Bay, Ont. “It’s just scary, because if you don’t match, you can’t practise.”

Before doctors can practise in Canada, they must complete a residency, or a period of hands-on training, at a teaching hospital. Graduating medical students apply for residencies through the Canadian resident matching service known as CaRMs.

They travel across the country for interviews in January and are normally assigned to training programs in March.

Each residency program ranks its preferred applicants, while students choose and rank their preferred programs. When I applied to residency 11 years ago, I was fortunate to secure a position at Dalhousie University in Halifax.

But getting a spot has become harder over the last four years.

For a start, while more applicants are signing up for matches, the number of spots available has not grown at all. In 2009, for every 100 graduates from Canadian medical schools, there were at least 110 residency spots. This ratio has tightened steadily, such that last year there were only 102 spots for every 100 Canadian graduates.

While this may seem like enough spots, applicants from overseas are also vying for the same spots, decreasing the chances of new Canadian graduates securing them.

Last year, 411 foreign-trained graduates were assigned spots, compared to 380 in 2011. Fewer foreign graduates applied after the introduction of a screening exam in 2014, but their numbers are now rising again.

The shifting popularity of specific areas of medicine has also skewed the process.

In particular, unprecedented interest in internal medicine has altered the balance, said John Gallinger, CEO of the Canadian Medical Residency Match System, which processes applications and runs the match algorithm.

He notes that, in contrast, 56 positions were unfilled in family medicine last year.

“Now we have a situation where more than half of all positions are in disciplines that have more demand than supply,” Gallinger said.

What’s more, the matching process has opened in recent years to residents who had already secured matches, but decided they wanted to change their specialty.

The numbers of unmatched doctors may seem insignificant in a system that last year fielded applications from 2,810 domestically trained graduates in the first round. But as the backlog grows, some graduates remain unmatched after two or more application cycles — enough time to complete training as a family doctor.

The faculty association contends that if governments want to be responsible with taxpayer money, they should ensure that these graduates can practise medicine, given that training is heavily subsidized.

“All Canadian MD graduates should be able to get a residency spot,” said Dr. Ruth Wilson, a professor of family medicine at Queen’s University. In November, she co-authored a call for a change of the match process.

The matching service defends itself by noting that the rising numbers of unmatched candidates cannot be fixed simply by changing the match program. More deep-seated changes are needed, it contends, in government policies and medical schools.

Meanwhile, unmatched graduates find themselves in an educational wasteland where they are neither students nor qualified physicians.

The consequences can be serious. Some graduates are saddled with high debt that they may be unable to pay down while they are unmatched.

“I knew that it was going to be a very lonely year, and I had to plan ahead,” said one unmatched student in Ontario who spoke on condition of anonymity. “There’s virtually no support.”

He entered the match last year, and despite applying to all six Ontario family medicine programs, came up short.

In light of last year’s shortfall, the Association of Faculties of Medicine in Canada and Canadian Federation of Medical Students are preparing for more unmatched students in 2018.

The AFMC has set a deadline of October 2018 for medical schools to come up with new plans to support unmatched students. Currently, some schools offer an extension of studies at medical school. At the University of Calgary, for example, students can apply for a 32-week extension.

“I don’t think we’ve spent this much time and energy on one area of medical education for a very long time,” said Purdy, who is also the federation’s vice president of education.

Until matters improve, applicants are trying to keep their options open. Many apply to more than one discipline in the hope of boosting their chances of securing a spot.