Ottawa takes its own revamped advice on Omar Khadr

Although the Liberals have chosen not to appeal the bail order for the ex-Guantánamo inmate, a larger court battle looms 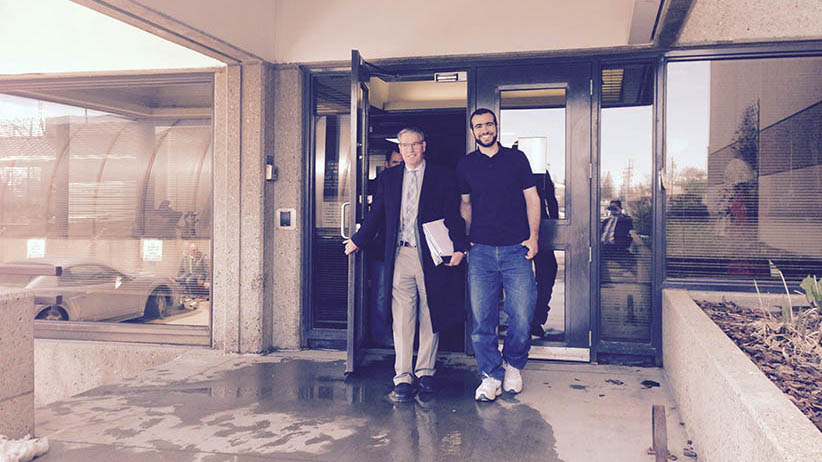 When Omar Khadr was shot and captured in Afghanistan all those years ago, Jean Chrétien’s Liberal government did not exactly fight for his Canadian rights. Although the Department of Foreign Affairs politely requested that the U.S. government not transfer the 15-year-old prisoner to Guantánamo Bay (“such a facility would not be appropriate” for a teenager, one diplomat wrote in 2002), the Liberals pretty much shut their mouths after Khadr landed in Cuba.

The Americans assured Canadian officials that their citizen was being treated fairly and humanely, and that was that.

In the years since, many veteran Liberals have expressed regret over how the Khadr file was initially handled. Bill Graham, foreign affairs minister at the time, now concedes that he should have done more to push for the teen’s release. Paul Martin, who succeeded Chrétien as PM, feels the same. (“We should have repatriated him,” Martin said, a few years back.) When Stephen Harper took office in 2006—and adopted a very similar Khadr strategy as his predecessors—the Liberal Opposition urged the new prime minister to do what they never did: stand up for his rights.

Now back in power, the party that admittedly botched the Khadr file the first time around appears willing to follow its own revamped advice. Late Thursday afternoon, the Liberal government announced what many predicted: that it would abandon the Harper Conservatives’ pending appeal of an April court decision to grant bail to the former Guantánamo inmate. Simply put, Khadr will remain a free man in Edmonton while he appeals his U.S. war crimes convictions at a special court in Virginia, a process that could take many more years.

“The Government of Canada respects the decision of the Court of Queen’s Bench of Alberta which determined that Mr. Khadr be released on bail in Canada pending his US appeal of his US convictions and sentence,” reads a brief joint statement, released by Public Safety Minister Ralph Goodale and Justice Minister Jody Wilson-Raybould. “Withdrawing this appeal is an important step towards fulfilling the Government’s commitment to review its litigation strategy.”

Now 29, Khadr spent a decade locked inside the infamous wire of Guantánamo, where he claims to have endured repeated bouts of torture. In 2010, after eight years in custody, he pleaded guilty at a military commission to five “war crimes,” including the battlefield murder of Sgt. 1st Class Christopher Speer. In an agreed statement of facts, the cornerstone of his plea, Khadr said he was a loyal al-Qaeda fighter obsessed with killing Americans “anywhere they can be found,” and that he threw the grenade that fatally wounded the Delta Force commando in July 2002. The plea deal came with an eight-year sentence, and a promise that Khadr could apply to serve the bulk of his time in the Canadian prison system.

Finally flown back home in September 2012, Khadr has since recanted his confession, saying he only agreed to the plea bargain (a “hopeless choice”) so he could escape Guantánamo. He is now appealing his convictions in the U.S., arguing, among other things, that the offences did not exist on the day of the battle—and that even if he did throw that grenade, it was a legitimate act of war, not a war crime. His lawyers also claim that he was so badly abused, beginning as a teenager, that the U.S. forfeited the right to prosecute him. “The government’s systematic and calculated mistreatment of Khadr over the course of a decade should and does shock even the most calloused conscience,” their appeal brief reads. “If this does not constitute outrageous government conduct, then the words have lost their meaning.”

It was that pending appeal that opened the door for Khadr’s early release.

Related: The remarkable bond between Lindhout, Harper and Khadr

But as much as the Trudeau government should be credited for dropping the Harper-era bail appeal—Khadr, now 29, has spent nine months as a free, obedient man, and fighting to put him back behind bars would have been a waste of time and money, especially since his sentence is set to expire in two years anyway—the Liberals clearly chose their words very carefully. They didn’t say that Khadr was horrifically abused at the hands of the U.S. government, and has suffered more than enough. They didn’t say that the party should have lobbied harder on his behalf back in 2002. And they didn’t come close to labeling him a victim.

Why? Because Khadr is still suing the Canadian government for $20-million in damages—and the Charter breaches laid out in his statement of claim revolve mostly around what the Liberals did, and didn’t do, during his early years of incarceration. In other words, Trudeau’s party isn’t quite done atoning for its acknowledged failings on the Khadr file. The only real question left is how much money it’s going to cost taxpayers.

When the lawsuit was first filed in 2004, Khadr’s statement of claim appeared destined to fail. He was in American custody, not Canada’s, so how could his Charter rights have possibly been violated? But 12 years and two Supreme Court decisions later, the lawsuit now seems unbeatable. Twice already, the country’s highest court has scolded Ottawa for stomping on Khadr’s constitutional rights—both times while the Liberals were in power.

A refresher: When he was apprehended, less than a year after the 9/11 attacks, Khadr was held at a U.S. military hospital in Bagram before being transferred to Guantánamo. By then, his father, Ahmed Said, was still very alive and very wanted, a reputed al-Qaeda financier fingered for his ties to Osama bin Laden by both the U.S. and the United Nations. And although Washington considered Ahmed’s teenage son an “enemy combatant” out of reach of consular access, it did permit “intelligence” visits. CSIS, Canada’s spy agency, was granted permission to interview him in February 2003, while Chrétien was still prime minister. An official from the Foreign Affairs intelligence branch was allowed to hitch along for the ride.

In chilling video footage released by a judge many years later, a 16-year-old Khadr pleaded with the unnamed CSIS agents to bring him back to Canada, insisting he’d been tortured. “Promise me you are going to protect me from the Americans,” he begged. A subsequent report written by the visiting diplomat said Khadr’s abuse allegations “did not ring true.” CSIS, for the record, considered the visit “highly successful.” (Seven months later, in September 2003, CSIS made a second trip to Guantánamo, this time without a diplomat. Again, Khadr claimed his previous confessions about his family’s al-Qaeda connections were false, the result of “torture.” When asked to describe the abuse he endured, Khadr told CSIS: “Listening to other people scream.”)

It was those CSIS trips that triggered Khadr’s lawsuit, alleging the Canadian spies questioned him without advising him of his basic rights to silence and legal representation—knowing full well his answers would be shared with U.S. authorities, who were weighing potential criminal charges. When Khadr was finally charged in late 2005, his legal team filed another Federal Court action, demanding access to the fruits of those CSIS interviews. After two divided lower court rulings, the Supreme Court sided with Khadr—for the first time. By then, America’s top court had already ruled that Guantánamo, circa 2003, was an illegal operation where inmates had no right to challenge their incarceration. “To the extent that Canada has participated in that process,” the Supreme Court ruled, “it has a constitutional duty to disclose information obtained by that participation to a Canadian citizen whose liberty is at stake.”

When forced, Ottawa did release all relevant documents. Among them was another bombshell report from Foreign Affairs, this one describing a solo visit by the same diplomat who accompanied CSIS on that first flight to Cuba. The April 2004 memo, written a few months after Martin was sworn in as PM, revealed that Khadr had been subjected to three weeks of systemic sleep deprivation “in an effort to make him more amenable and willing to talk.” Dubbed the “frequent flyer program,” his U.S. jailers moved him from cell to cell every three hours for 21 consecutive days.

Armed with that discovery, Khadr’s lawyers went back to court, arguing yet another Charter breach and demanding that Ottawa request his repatriation. The Supreme Court would not go quite that far, but it did conclude—again—that Canada violated his rights. Knowingly questioning a sleep-deprived teenager, the court concluded, “violates the principles of fundamental justice” and “offends the most basic Canadian standards about the treatment of detained youth suspects.”

The $20-million lawsuit remains active, inching its way through Federal Court. In the meantime, Khadr is still living at the Edmonton home of one of his longtime lawyers, Dennis Edney, while studying to become an emergency medical technician.

If he wins his lawsuit—or the Liberal government chooses to settle out of court—he may not need a job. Like all things Khadr, only time will tell.