Crown, victims' support worker said case should be viewed as baby steps towards expanded use of canines at trial 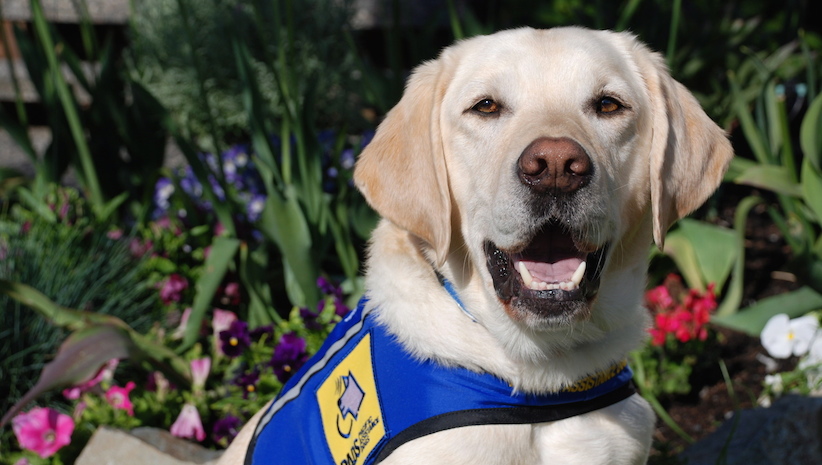 VANCOUVER – A police dog has helped a 10-year-old girl endure the pain of testifying about an alleged sexual assault, and in doing so has become the first canine to assist a child during a trial in British Columbia.

Caber, a yellow Labrador retriever, rested peacefully in a bed and at the girl’s feet, as she spoke in the witness box, while shielded by a screen in Surrey provincial court Tuesday.

The dog soothed the girl so she could provide a full and candid account of the horrific incident that allegedly victimized her the previous year, said Crown lawyer Winston Sayson.

“When the child was testifying, she would reach down to just pet or rub the dog. When she broke down during the testimony, we had to stand down,” said Sayson.

“She basically lay down beside the dog. They laid down together and it really helped her calm down and she was able to return to court and complete her testimony.”

Crown and a victims’ support worker said the successful integration of a dog in the courtroom should be viewed as baby steps towards expanded use of canines at trial.

Among the six dogs believed to be accredited to assist victims in Canada, a canine named Hawk supported a victim in Calgary in December 2014, and another dog was permitted in an Edmonton courtroom in March.

A judge ruled Caber could attend the trial to supplement a support worker who is permitted to accompany any witness under age 18. The defence lawyer took no position on the matter, Sayson said.

The dog was not present to help make the Crown’s case but simply aid the witness to give evidence, added Sayson.

He said the girl testified for about 90 minutes but declined to provide further details for her protection.

Kim Gramlich, Caber’s handler and the victim services co-ordinator for the Delta Police Department, said the dog seemed to ground and focus the girl when she was upset.

Gramlich said she got the idea from the United States where more than 70 dogs do similar work.

The Pacific Assistance Dogs Society, which trained Caber for two years, provided the animal at no cost to the Crown as part of its mandate.

Winston said the door has opened for the Crown to provide more options for victims of crime but stressed only accredited dogs will be welcome.

“We do not want everybody coming with their pet parakeet or pet boa constrictor,” he said. “There has to be some dignity in the courtroom.”