Seven-year-old Bruno is listed as stable in the intensive care unit after being found in well near Estevan, Sask. 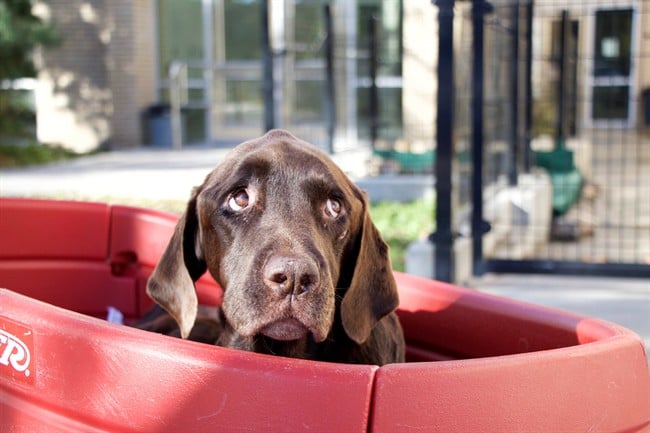 Bruno the dog recovers at the University of Saskatchewan in Saskatoon in a handout photo. For Bruno the Labrador retriever, all’s well that ends well. The lucky dog is recovering under a vet’s care after being trapped at the bottom of a well for almost a month near Estevan, Sask. (THE CANADIAN PRESS/HO-Western College of Veterinary Medicine)

SASKATOON – A chocolate Labrador retriever trapped in a well for almost a month is responding to special care from animal medical clinicians and a nutritionist.

Seven-year-old Bruno is listed as stable in the intensive care unit at the Western College of Veterinary Medicine in Saskatoon.

Dr. Duncan Hockley, director of the school’s Veterinary Medical Centre, says Bruno is being provided with the best treatment possible.

The dog had lost half its body weight and was barely alive when it was rescued after 27 days near his family’s home near Estevan, Sask., last week.

His owners found him when one of their other dogs wouldn’t move from a spot in tall grass near a farm field.

Hockley says the lab still has a long way to go.

“Bruno’s recovery will not be quick, but he is displaying a strong will to live,” Hockley said in a news release.

“We’re working diligently to provide the best medical care for our patient, Bruno, and we are very happy with his progress.”

Bruno managed to survive on snow and rainwater.