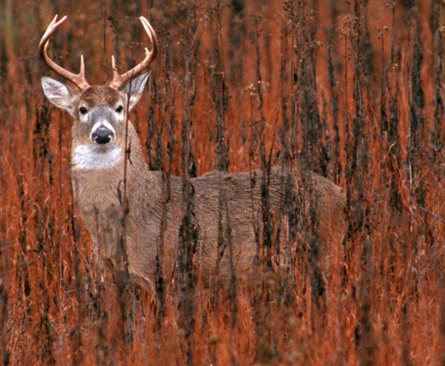 Two Ontario hunters who fired at a fake deer from the comfort of their pick-up truck—and then tried to convince a judge that the decoy, planted by conservation officers, was an “abuse of process”—have lost their four-year legal battle with the Ministry of Natural Resources. Gerald Burt Buckton, 58, and his 26-year-old son, Bruce W., were convicted of three separate charges, slapped with a two-year hunting ban, fined $2,000 each and ordered to attend a “Hunter Education Course” before reapplying for a licence. Their rifle, a bolt-action Tikka, has also been forfeited to the Crown.

The guilty verdict is the final chapter in a bizarre, drawn-out case that forced wildlife officials to justify their longstanding practice of using phony deer to nab reckless hunters. In the end, though, the defence tactic didn’t work. The Styrofoam decoys are legal—and the Bucktons’ behaviour was not.

It all began in the late afternoon of Nov. 10, 2005, when father and son were driving along a gravel road in South Bruce Peninsula and noticed what appeared to a be a white-tailed deer standing in an adjacent field. Gerald, who was behind the wheel, slammed on the brakes while Bruce picked up a rifle, aimed it toward the driver-side window, and fired two quick volleys. After his dad slapped the truck in reverse, Bruce pulled the trigger a third time. Seconds later—after realizing the ruse—they sped away.

The sting operation was flawless. Waiting around the corner, two conservation officers flagged down the pick-up truck and collected the evidence: a warm rifle, a spent shell casing and a pair of “argumentative and uncooperative” passengers. “We didn’t do anything wrong,” Bruce allegedly told the officers. “I was over the fence when I shot.” Both men were later charged with violations of the Fish and Wildlife Conservation Act, including unlawful discharge of a firearm “without due care and attention for people and property.”

But what should have been a straightforward proceeding evolved into a constitutional clash over the ministry’s right to use decoys. Edward Burlew, a lawyer for the Bucktons, argued that the deer replicas represent an “abuse of process” that “is inherently dangerous, tantamount to the state inducing people to shoot firearms at targets in dangerous situations.” At first, the strategy worked. A justice of the peace, Avis Rodney, stayed all the charges in 2006, going so far as to accuse the officers of numerous Charter violations. (She was especially critical of the fact that the undercover operation was conducted on private property without the knowledge of the owner).

Late last year, however, a higher court judge reinstated the charges and ordered a new hearing. Justice Julia Morneau concluded that the decoys are neither an abuse of process nor a danger to oblivious bystanders. “There was no evidence that other humans or animals came onto the scene before or during the alleged shooting,” she wrote. “The officers were in a position to halt the operation if public safety became an issue.”

Trial number two took place two weeks ago. The court heard how the decoys are built (with Styrofoam, reinforced steel and genuine deer hide) and how Bruce Buckton is quite a decent shot (after the bust, the imitation deer contained two fresh bullet holes). But the evidence was too overwhelming for the justice of the peace, who said the Bucktons acted in a “careless” and “unsafe” manner. “There is a higher standard of care required for firearms,” wrote Bridgette Forster of Owen Sound. “Firearms are designed for and are capable of killing. Hunters are expected to follow safe practices when handling and discharging their firearms. When they stray from those safe practices they are not acting as a reasonable and prudent person.”