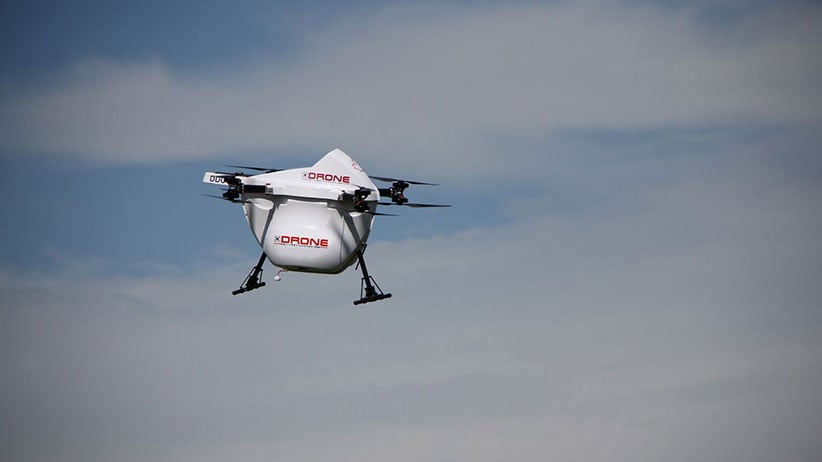 In Moose Cree First Nation, a northern Ontario community on Moose Factory Island about 850 kilometres north of Toronto, the most basic goods arrive by either helicopter, winter road or barge. When fresh produce, milk, detergent and baby supplies appear on store shelves, prices are nearly double those found in most southern Canadian cities. The closest one can get to the community by road is either Timmins or Cochrane, from where you’d need to take a plane and train, respectively, to Moosonee, a town near the southern tip of James Bay within sight of the island. For part of the year, a winter road along the frozen Moose River allows the community’s roughly 1,700 residents to travel back and forth, but in recent years, warmer temperatures have shortened its use. Boat taxis ply the waters in summer. But during the precarious freeze and break-up seasons, a $40 helicopter ride is the only way to cross.

To improve access to everyday essentials, Moose Cree First Nation and Drone Delivery Canada, a fledgling, Toronto-based company, have agreed to start a pilot program to deliver food, medical supplies and mail to the community by drone. Transporting goods by helicopter sling costs about $1,800 per hour, while other options remain time-consuming and unreliable. Drone Delivery hopes its partnership with Moose Cree First Nation is the first step in expanding to more northern communities, where the high cost of food and basic supplies remain a constant hurdle. The company and community leaders are still costing the program out, but Drone Delivery will cover the bill for the test phase, while the commercial arrangement will come out of Moose Cree First Nation’s coffers. The community thinks it will be successful because of the dire need, and plans to seek funding from the federal government to help maintain it.

“We’ll always need delivery service to our island regardless of the outcome,” says Stan Kapashesit, Moose Cree’s director of economic development. “Getting stuff to our island is not impossible; it obviously takes time, effort and money.”

According to Food Secure Canada, 70 per cent of households in northern Ontario face food insecurity, many of them in First Nations, Inuit and Métis communities. It found that high harvest and shipping costs have detracted from the health and well-being of northern residents—especially lower-income families for whom some goods are unaffordable. Nutritious perishables like fresh fruit, vegetables, milk and meat must be shipped quickly, which adds to their cost. Meanwhile, Nutrition North Canada (the federal program designed to lower prices) has failed to properly subsidize northern grocery stores, Food Secure found.

“I don’t think delivering a pizza two minutes earlier is a positive impact on society,” says Tony Di Benedetto, the CEO of Drone Delivery Canada. “But if we can move medicine and potentially save a person’s life or help reduce the cost of a $22 carton of orange juice to something more acceptable, that’s a real application for this technology.”

The company’s Sparrow drone can carry about 4.5 kg of goods from Moosonee to Moose Factory Island, a 10-kilometre trip that takes a drone roughly five minutes. Di Benedetto says that the company hopes to receive a special flight operations certificate from Transport Canada by the end of the year, after a three-year process meant to ensure the project meets functionality and safety standards. The pilot phase starts in November, and will last at least three months as operators determine how many drones and deliveries per day are needed. They’ll start with two drones, and if all goes well, the company expects to have a fleet of several small aircraft up and running by early 2018.

Picture an airline, but with tiny aircraft and situated in a small community. Each drone will be operated from a control centre, flying a route with about five safe landing spots located throughout the community. The landing zones will be connected to important hubs like the band office or grocery store, where locally trained operators will place arriving packages inside depositories resembling community mailboxes found in urban centres. “We call it a railway in the sky,” Di Benedetto says, adding that he expects that the drone program will create more jobs within the community. He’s also eyeing the possibility of working with university partners to develop drone pilot training for the local school—new curricula that could train youth for jobs in the new tech industry. “It’s all about integrating this technology within their community without changing their community,” Di Benedetto says. “But at the same time, provide the benefits from it.”

For Faries, who was born and raised on Moose Cree First Nation, the new service is an opportunity to improve the community’s standard of living—embracing new technology while preserving her people’s way of life. “We get to balance that while maintaining our identity and culture,” she says, noting that the Cree people on Moose Factory Island follow the seasonal rhythms of the land, rather than the calendar year. They rely on moose, goose, fish and berry seasons for traditional harvests and Faries hopes that, in addition to delivering groceries, drones will deliver supplies, first aid, and even messages to hunters and gatherers when they’re out on the land.

When test deliveries begin, Faries will take students out of school to watch the drones take flight—a chance to witness a historic moment for Moose Cree First Nation. The air will likely be cool—close to freezing, if seasonal norms hold. High above the community, the terrain’s vast forest of fir trees will be the only ones still green. “We love it up here and we don’t want to leave—this is our home, this is our land, this is what our ancestors left for us to protect and watch,” Faries says. “Technology and these types of partnerships will help us reach our goals as a nation.”