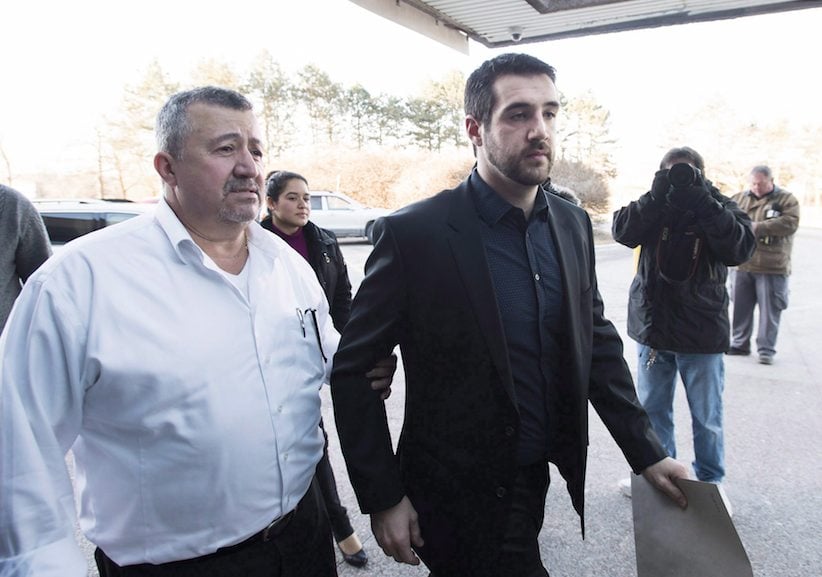 Marco Muzzo, right, arrives with family at the court house for his sentencing hearing in Newmarket, Ont., on February 23, 2016. (Nathan Denette, CP)

NEWMARKET, Ont. — A drunk driver who killed three children and their grandfather in a horrific crash north of Toronto was sentenced to 10 years in prison Tuesday as the children’s mother sobbed quietly in the courtroom.

Marco Muzzo, 29, glanced quickly at his family in the front row of the courtroom in Newmarket, Ont., as he was led away in handcuffs.

He also faces a 12-year driving ban, which will take effect on his release from custody.

Nine-year-old Daniel Neville-Lake, his five-year-old brother Harrison, their two-year-old sister Milly and the children’s 65-year-old grandfather, Gary Neville, died last September after the van they were in was hit by a speeding SUV driven by Muzzo.

Superior Court Justice Michelle Fuerst said no matter the length of sentence, Muzzo will eventually be released and go back to normal life, but the victims’ family won’t.

The Neville-Lake family “will continue to serve the form of life sentence that Mr. Muzzo inflicted on them by his decision to drink and drive,” Fuerst said.

“Any loss of life caused by an impaired driver is tragic. In this case, however, the enormous harm caused by Mr. Muzzo is extraordinary,” she said in delivering the sentence. “In one fell swoop, he decimated an entire generation of the Neville-Lake family, its legacy and its future.”

Though Muzzo has shown genuine remorse, “a lengthy penitentiary term is necessary,” in part to deter others from drinking and driving, she said.

“For as long as Mr. Muzzo has been alive, courts have warned about the consequences of impaired driving. Yet the message escaped him,” she said.

“It is important that it does not escape others.”

Jennifer Neville-Lake, who lost her children and her father in the crash, said her family is a tragic reminder of the consequences.

“Please, keep in mind: when you chose to drink and drive you’re hurting other families, you’re killing someone else’s babies, like mine were killed,” she said outside court.

“All of mine were killed on a beautiful Sunday afternoon just after 4 o’clock. Please don’t do that.”

She recalled holding Milly and Harrison close in their last moments and showed a photo of the two children holding hands in their hospital beds.

“That’s Milly and Harry. They joined their hands together. They pushed their beds together, I decided I had to turn the machines off so Milly’s heart wouldn’t explode. I couldn’t pick which baby to turn off the machines first,” she said, her voice cracking.

“Edward and I crawled into bed with them,” she said. “We put our hands on top of theirs so that at least when my children … just like we were with them when they were born, we were with both of them when they died. They died hugged by us in bed surrounded by all the family and friends that sang to them ‘Somewhere Over the Rainbow’ as we turned off the machines.”

Muzzo’s sentence, she said, is roughly the same length as her eldest son Daniel’s life.

Prosecutors had asked for a sentence of 10 to 12 years behind bars and a ban on driving for eight to 10, but the defence had argued an eight-year sentence would be enough.

“I would not wish this horror I am living on anyone but you,” she said at the time. “You deserve to know exactly what it feels like to have every single child you created meet someone like you.”

Muzzo apologized to the family last month, saying he was “tortured by the grief and the pain” that he had caused.

“I will forever be haunted by the reality of what I have done. I am truly sorry,” he said.

Muzzo’s trial heard he had returned from his bachelor party in Florida on a private plane and picked up his car at Pearson International Airport prior to the Sept. 27, 2015, crash.