OTTAWA — The once-towering case against Sen. Mike Duffy collapsed utterly Thursday as a judge cleared the man at the centre of the long-running Senate expense scandal — and delivered a scathing indictment of the “ruthless” tactics of the Prime Minister’s Office under Stephen Harper.

Duffy celebrated with hugs from friends and hearty handshakes with his lawyers after Ontario Court Justice Charles Vaillancourt spent the better part of the day burnishing the controversial senator’s long-tarnished reputation.

Duffy left the court without speaking to reporters but his counsel, Donald Bayne, called it “a resounding acquittal.”

“I would say that Sen. Duffy has been subjected for the last two and half, three years, to more public humiliation than probably any Canadian in history,” said Bayne.

When it came to the political operatives around the former prime minister, notably Harper’s former chief of staff Nigel Wright, Vaillancourt did not mince words.

“Was Nigel Wright actually ordering senior members of the Senate around as if they were mere pawns on a chess board?” Vaillancourt asked. 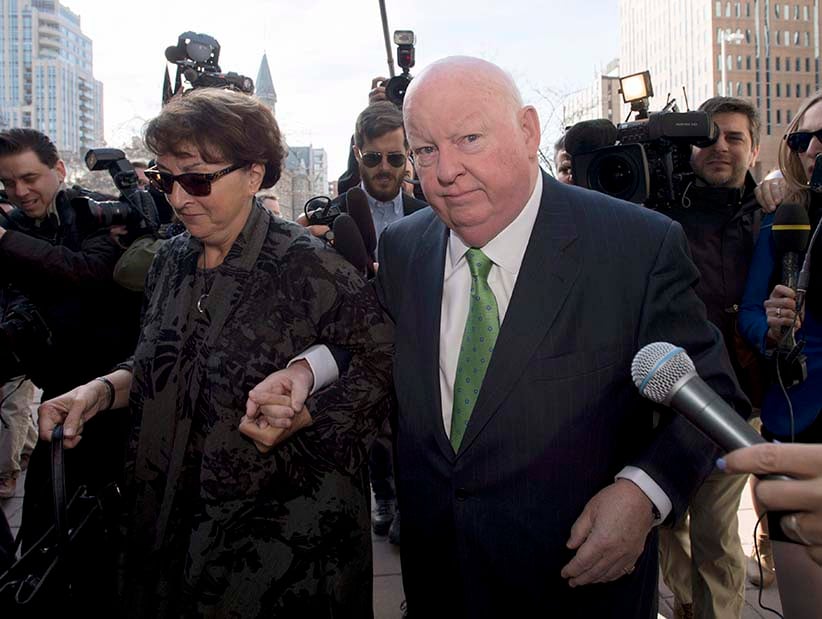 “Did Nigel Wright really direct the senator to approach a senior member of an accounting firm that was conducting an independent audit of the Senate to get a peek at the report or part of the report prior to its release to appropriate Senate authorities or to influence that report in any way?

“Does the reading of these emails give the impression that Sen. Duffy was going to do as he was told or face the consequences?”

Yes, Vaillancourt concluded, citing a number of email communications that were entered into evidence.

“The precision and planning of this exercise would make any military commander cry,” he said. “In the context of a democratic society, the plotting revealed in the emails can only be described as unacceptable.”

After 62 days of hearings, Vaillancourt’s long-awaited decision was a systematic dismantling of the Crown’s case, starting with a raft of charges stemming from his travel expense claims and his residency declaration _ an issue of direct relevance to Duffy’s eligibility to represent P.E.I.

He dismissed eight charges related specifically to Duffy’s arrangements with friend Gerald Donohue, as well as a former intern and a makeup artist and his personal trainer. Those charges are connected to some $65,000 in contracts Duffy arranged with companies owned by Donohue to pay for various services to other individuals.

“The circumstances of this case are a far cry from the usual fraud/breach of trust playbook,” Vaillancourt said of the Donohue arrangements.

“I was not presented with evidence suggesting expensive wining and dining, lavish living or pricey gambling junkets, or secret financial hideaways. Now, fraud and breach of trust can occur outside the aforementioned examples; however, the thrust of all of Sen. Duffy’s perceived misadventures was focused on Senate business.”

Vaillancourt — who did not explicitly state why he was dismissing some charges and finding Duffy not guilty on others — described the senator as a “credible witness” and cast doubt on the Crown’s allegations.

“This case provided me with ample opportunity to assess the credibility of Sen. Duffy,” he said. “He was on the stand for many hours; at the end of the day I find that Sen. Duffy is an overall credible witness.”

He declared Duffy to have shown no criminal or “sinister” intent _ save perhaps for some opportunism _ in filing his expense claims.

“Sen. Duffy believed reasonably … that all of the travel encompassed by counts three to 20 were properly expensed as parliamentary functions.”

As he dismissed the charges related to Duffy’s travel claims, Vaillancourt said at one point that “the Crown has not established the guilt of the accused beyond a reasonable doubt.”

Vaillancourt said Duffy “did not ignore the gathering storm around his appointment,” but rather “sought out reassurance about those issues and was assured that he has no valid concerns.”

He said Duffy “honestly and reasonably believed and relied on the advice he received regarding his appointment and his primary residence, and he acted upon it.”

It’s was long-awaited finale to a stubborn political drama that dispatched Wright as chief of staff, staggered the Conservative re-election campaign, embarrassed and diminished the Senate and laid bare the inner workings of a notoriously guarded and secretive government.

Duffy was charged in July 2014 with 31 counts of fraud, breach of trust and bribery, the latter being the most serious of all the charges. He has pleaded not guilty to all of them.

Vaillancourt said despite the “dalliance with definitions” that Duffy’s lawyer and the Crown played over the term “primary residence,” no such definition exists in the Senate rules that guide spending decisions.

“After reviewing the submissions and the facts in this case, I am not satisfied that the Crown has proven the guilt of Sen. Duffy in relation to alleged fraudulent residency declarations, and their expense claims in connection thereto, beyond a reasonable a doubt.”

He said he did not find the senator was engaged in “sinister motive or design” in using pre-signed blank travel forms, although he added doing so probably wasn’t a good idea.

The bribery charge was the result of Wright’s decision to personally pay the $90,000 in living expenses Duffy claimed by declaring his long-time home in an Ottawa suburb was actually a secondary residence.

The remaining 30 fraud and breach of trust charges related to Senate money the Crown alleged Duffy either received for trips that had nothing to do with Senate work or that he funnelled through a friend’s company to cover costs the Senate wouldn’t pay for.

It all began in 2012, when the auditor general issued a report that recommended taking steps to ensure members of the upper chamber were submitting enough proof their expense claims were for legitimate parliamentary business.

Questions about Duffy’s own claims — including whether he was a legitimate resident of P.E.I., the province he’d been appointed in 2008 to represent — began later that year.

The trial exposed the inner workings of a secretive Prime Minister’s Office and the Conservative party machine, shaped the early narrative of last year’s fateful election campaign and even led to at least one high profile Conservative publicly turning his back on the party.

Benjamin Perrin, a former legal adviser to the Prime Minister’s Office who became caught up in the who-knew-what-when storyline, admitted in the final days of the campaign that the Conservatives had lost “the moral authority” to govern.

The ensuing ethics and spending scandal did force a national conversation about the need for Senate reform _ an issue Harper referred to the Supreme Court, only to be shut down by a high court that insisted constitutional amendments would be unavoidable.

For his part, Duffy held his tongue throughout the trial, save the eight days that he spent on the witness stand. The trial began last April as the hottest ticket in Ottawa, a political cause celebre that promised to lay bare the inner workings of one of the most secretive, media-wary governments in recent history.

But when the Oct. 19 election upended the status quo on Parliament Hill, the public and media interest in the trial all but evaporated as the Harper era was relegated to the annals of history.

As leader of the official Opposition, Tom Mulcair relentlessly grilled the Tories during the hottest days of the Duffy scandal, prompting former prime minister Brian Mulroney to call him the best Opposition leader since John Diefenbaker.

The case will serve as a reminder to what happens when Conservatives are in power, said Mulcair, but it also exposed real faults with the Senate.

“Canadians have been able to see since the beginning of the Duffy affair that everything to do with the Senate _ from the appointment process through their administration _ that they are unaccountable, and it is a grossly undemocratic institution.”

— With files from Jordan Press

Related:
Nick Kohler on how Duffy got his revenge anyway