If the case counts in West Africa continue at the current low level, only one Ebola vaccine trial may stand a chance 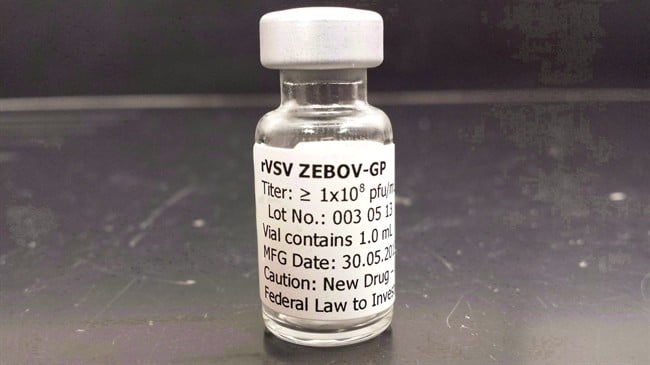 TORONTO – New Ebola infections in Guinea and Sierra Leone are down to a trickle. That means while there may still be time to prove if experimental Ebola vaccines protect against the dreaded disease, the chances of success are becoming slimmer.

The teams trying to do that critical research know the odds are stacked against most of the trials that are underway.

In fact, it could be that only one — a World Health Organization-led trial in Guinea testing a Canadian-designed vaccine — stands a real chance at coming up with an answer, if the case counts in West Africa continue at the current low level.

The study involves vaccinating rings of people who are contacts of known cases to see if the vaccine prevents further spread. So far more than 70 rings out of a potential of 190 have been enrolled in the trial, testing a vaccine called rVSV-ZEBOV.

Dr. Marie-Paule Kieny, who leads the WHO’s efforts on development of Ebola vaccines and drugs, says if the vaccine is highly effective, the picture could come into focus relatively soon. The trial’s independent overseers, its data and safety monitoring board, will be asked to review its status in the coming weeks.

“So this is why it will be very important to let the DSMB at one point during summer … look at the data and to tell us ‘Well, you have enough’ or ‘Fine but keep going’ or ‘You will never demonstrate anything,'” Kieny says.

If the trial proves rVSV-ZEBOV protects — or doesn’t — and the outbreak still smoulders, the Guinea group will test a second vaccine. Kieny says work is underway to select which should be the second tested, a vaccine being developed by GSK or one being produced by Johnson and Johnson.

Already a U.S. Centers for Disease Control-led trial in Sierra Leone has been adapted to ensure that it will produce useful information if, as feared, it cannot generate enough evidence to show whether the vaccine it is testing is effective.

The Sierra Leone trial is also testing rVSV-ZEBOV, which was designed at Canada’s National Microbiology Laboratory in Winnipeg. The vaccine is being developed by pharmaceutical giant Merck and NewLink Genetics, a biotech from Ames, Iowa.

“It doesn’t look very likely — although it’s not impossible — that the trials will get at the efficacy of the vaccine,” acknowledges Dr. Anne Schuchat, director of the CDC’s Center for Immunization and Respiratory Diseases.

The Sierra Leone trial to date has vaccinated more than 3,000 health-care professionals and other front-line Ebola response workers.

In the event the trial can’t reach a conclusion about the efficacy of the vaccine, the research team hopes to gather information that will help the U.S. Food and Drug Administration and other regulatory agencies consider another route to license the vaccine, called the animal rule.

In exceptional circumstances when the efficacy of a drug or vaccine cannot be tested in people, regulators can substitute data from animal studies, pairing it with evidence that shows whether the product is safe to use.

The Sierra Leone team will follow some of the people in their trial to see what happens to the levels of Ebola antibodies in their blood at various intervals post-vaccination.

“So we think it’s too soon to be certain of whether (proving) efficacy will never be possible with our design,” says Schuchat.

“But we’re trying to gather … results that could potentially contribute to an alternate pathway to an accelerated licensure.”

A third trial testing rVSV-ZEBOV and the GSK vaccine started in Liberia early this year. Soon after Liberia’s outbreak stopped, leaving that trial — led by the U.S. National Institute of Allergy and Infectious Diseases — unable to determine whether either vaccine works.

Plans are being drawn up to move the trial to Guinea. But it’s now estimated that the study will need to enrol roughly 200,000 people to prove if the vaccines work, given the low rate of new infections. The trial design is a classical one: Equal numbers of people will get one of the vaccines or a salt-water injection that will serve as a placebo.

“I don’t have a time frame but I’m hoping within one to two months we’d be able to start in Guinea,” says Dr. Clifford Lane, clinical director for the National Institute for Allergy and Infectious Diseases.

Vaccinating that many people will take months, if not longer — a fact that leads some observers to question why the study is being pursued at this point.

If the WHO study concludes by over the summer that rVSV-ZEBOV works, the new trial would have to be revised or abandoned. If it has been shown that one of the Ebola vaccines works, from an ethical point of view Ebola vaccines can no longer be studied against a placebo.

As well, all involved in the Ebola outbreak hope transmission of the virus will be stopped long before this new study could get an answer.

Lane understands that. Still, he says his group’s approach is to push ahead until such time as it is clear the research cannot be done.

“If in two months there are no cases that would be a great celebration,” Lane says.

“I’m being very serious. My hope is we never have to do this study. But as long as there’s cases . . . we’re going to work as hard as we can to get this launched.”

FILED UNDER: Ebola Ebola vaccine WHO