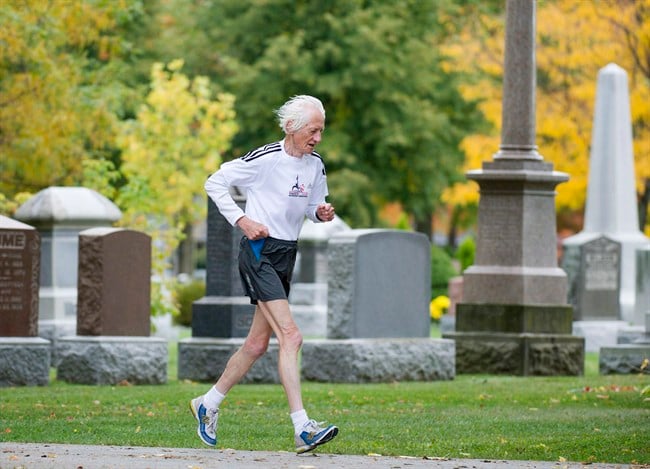 TORONTO – Ed Whitlock had a love/hate relationship with running. The promise of fast finishes and smashed records always pulled him — grudgingly — back to the trails.

The decorated marathon runner, who famously broke records well into his 70s and 80s, died Monday, just a week after his 86th birthday.

Whitlock’s family said he died of prostate cancer in a Toronto hospital.

“His wisdom, guidance and strength of character will be greatly missed by his wife Brenda, sons Neil and Clive, and sister Catherine,” Whitlock’s family said in a statement distributed by Canada Running Series, the organizer of the annual Scotiabank Toronto Waterfront Marathon.

The British-born resident of Milton, Ont., who called training runs “a chore,” holds more than three dozen world records from the road and the track. He became the first septuagenarian to run a marathon in under three hours when he posted a time of two hours 59 minutes 10 seconds at age 72 at the 2003 Scotiabank event.

A year later he improved that record with a time of 2:54:49, a result that, if age-graded, is considered by many to be the fastest marathon ever run.

Alan Brookes, the race director of the Toronto event, called Whitlock a “legend.”

“This is an enormous loss to Canada and the global running community,” said Brookes. “Somehow we thought Ed would just go on setting records forever. Ed brought so much joy and inspiration to so many of us.”

Eventually Whitlock set world master’s marathon records for age 75-plus, 80-plus and, most recently, 85-plus with a time of 3:56:38 on Oct. 16 at the Scotiabank Toronto Waterfront Marathon.

The droll Whitlock was the hit of the post-race news conference. When asked if he felt pressure to break the record, he replied: “I don’t want to disgrace myself, I suppose.”

He ran that day with race bib No. 85 pinned on a faded teal running singlet, and scuffed running shoes. How old were the shoes? Whitlock couldn’t recall.

A clip from that record race was viewed by over 11 million people worldwide on the Olympic Channel on Facebook.

Brookes said Whitlock defined the Toronto marathon. The dapper Englishman with the white pageboy hairstyle that hung almost to his shoulders was a familiar fixture on the road racing circuit.

“It’s hard to relate to breaking two (hours, which no-one in history has broken), but so many runners around the world could relate to their granddad or their great granddad breaking three (hours) or breaking four,” Brookes said.

Reid Coolsaet, a two-time Olympian in the marathon, said it was “always a pleasure to chat with Ed before races.

“He was sincerely interested in how our training and racing was going. He showed us all what is possible to achieve later in one’s running career,” Coolsaet said. “He kept his training simple and proved his methods worked.”

Eric Gillis, who finished 10th in the marathon at the Rio Olympics, said he also admired Whitlock’s training methods.

“Ed inspired me to simplify my training with his no fuss, no frills, run long approach. Most of all though, I admired this calm, easy going, approach to life.”

Whitlock was known for his daily training sessions at Milton’s Evergreen Cemetery, where he would do laps around the grounds for hours past the carefully tended headstones. The sweeping canopy of maple trees, he’d explained, provided cool relief in the summer.

“We travelled many miles together,” said Brookes. “He will be deeply missed, but his indomitable spirit, his love of racing, his modesty and inspiration, and so many unforgettable Ed memories, will be with us always.

Whitlock grew up in London and moved to Canada following university. He ran in his teens and then rediscovered the sport in his 40s when he volunteered to coach with a track club just outside Montreal. He often wondered how far he could have gone in the sport had he had proper coaching in his youth.

He said neither of his two sons were serious runners and his wife Brenda had no interest in the sport.

“No, she’s got more sense,” Whitlock said in a 2012 interview with The Canadian Press. “Got to have one sensible person in the family.”

Whitlock himself professed no undying love for the solitary training that came with being a long-distance runner. There was no runner’s high when he was out in the cemetery. He said his biggest challenge was boredom. He would skip training runs for family commitments and didn’t like to run in the rain.

“I don’t particularly enjoy this daily drudge, it’s something that has to be done if you want to run well,” Whitlock said in 2012. “I suppose it’s the sense of satisfaction to be able to keep going for one thing.

“And to run well, for another (reason). I suppose I’m results-oriented, I’m mainly running for certain times in races, setting records, that sort of thing is what gives me my satisfaction I guess. And I find for me the more running I do the better I’ll race. That’s the incentive.”

The label “role model” never sat well with him.

“I don’t look upon myself as that,” he said. “I never know how to respond to that. I don’t know, what can one say?”

Whitlock battled injuries on and off for the past several years, taking off months at a time to deal with arthritic knees, bad hips and a frozen shoulder. He was not a big believer in physiotherapy, and said he’d never been interested in stretching or yoga. Rest was his favourite method of rehabilitation.

He liked to say how doctors told him several years ago that, due to his bad knees, his running day were behind him. He rebounded from several months off to race the Scotiabank marathon and then followed it up in November by setting a 15-kilometre world record in the 85-89 age class at the Stockade-athon race in upstate New York.