Every city struggles occasionally with rebranding efforts, but it's seldom the ongoing identity crisis that it tends to be in Edmonton 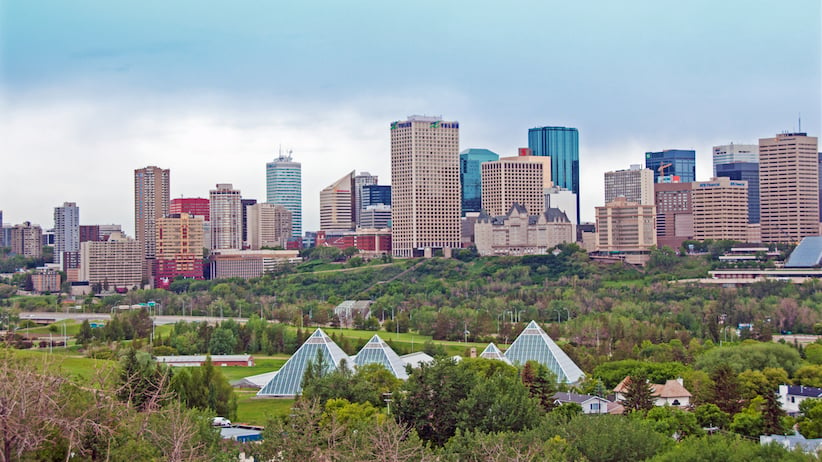 “This is our one-word brand,” declared Brad Ferguson, CEO of Edmonton Economic Development Corp. on Tuesday, as he showed city councillors a giant-screen slide of EDMONTON in white block letters against a black background, with a red maple leaf period.

“Please know it’s not the #YEG brand or logo,” Ferguson tweeted on Tuesday evening, after local media outlets reported on the apparently latest new slogan for Alberta’s second-largest and most introspective urban centre. “It’s a wordmark that I use in presentations–that’s it.”

This image created quite a stir today. Please know it's not the #YEG brand or logo. It's a wordmark that I use in presentations – that's it. pic.twitter.com/JmgFbO7D2r

By then, alas, it was too late. There was quick reputational repair work that needed doing, confusion that needed clearing up, and of course wisecracks that needed to be cracked online.

The Maple Leaf at the end of the new city brand is so that people don't confuse us with Edmonton, Kentucky, right? #yeg #Yegcc

After 4 years of debate #yegcc has settled on a brand and will go with "Edmonton". Other cities are expected to re-brand as "Not Edmonton" 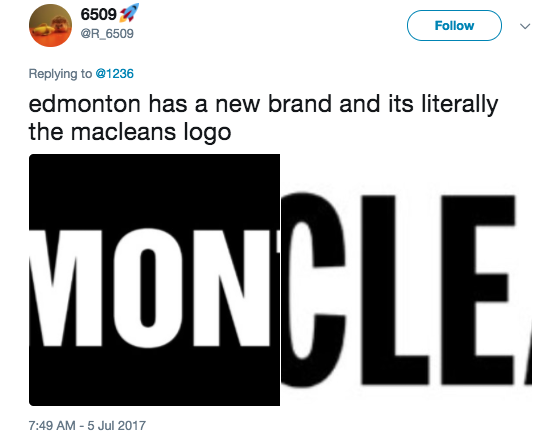 (Well, no; they’re clearly different typefaces, and there is a distinct look to our magazine logo’s apostroleaf. Yes, I learned today that’s what editors call the patriotic punctuation.)

Brad Ferguson never meant to say he was unveilling a new brand for the city; rather, he made a glib statement as part of a broader explanation to a council committee about Edmonton’s anti-slogan brand narrative about local entrepreneurialism, which his economic development agency considers one of the most successful campaigns in years. (It even won an international branding award, because of course that exists.)

How did he get so badly misinterpreted? For starters, perhaps because the head of Edmonton Economic Development declared something was the “one-word brand” at a council presentation about branding strategy. The deeper reason, though, is Edmonton has long been looking inwards and outwards for a clear identity, a way to express and define itself–which has long been a frustrating challenge in a city that’s part government/academic and part roughneck, lacks signature ocean ports or mountains or linchpin geography, and watches with some envy as, three hours to the south, Calgary cockily embraces its image as cowboy-hat-clad oil executives and doesn’t feel the need for annual or biannual rebranding conversations (though another Winter Olympics sure would be nice.)

Almost every city in Canada and abroad struggles occasionally with branding and rebranding efforts. But it’s seldom the ongoing identity crisis that it tends to be in Edmonton, where insults are taken like puncture wounds and rebranding has become a signature brand unto itself.

1985: Mordecai Richler calls Edmonton the “boiler room” of Canada in the 11th paragraph of a long Wayne Gretzky profile in the New York Times. “Nothing to delight the eye” downtown in what “seems not so much a city as a jumble of a used-building lot,” the author wrote. This was a big deal for ages, even prompting an anniversary column reflecting on it 30 years later. Then-mayor Laurence Decore slammed Richler as a “haughty easterner,” and the Edmonton Sun published his home phone number in Montreal so readers could scold him.

1987: The phrase City of Champions had been bandied about earlier in the Edmonton Oilers’ Stanley Cup dynasty by sportswriters and city councillors. After a deadly tornado through Edmonton, Decore used the term and it stuck, eventually landing on the city’s welcome signs and staying there long, long after Wayne Gretzky retired and the city’s NHL glory faded.

1989: After lobbying from a summer event consortium that included North America’s biggest fringe theatre festival, brochures began declaring Edmonton as Canada’s Festival City. Although every Canadian city fills its summer with arrays of outdoor music stages, and meat-on-a-stick fairs, Edmonton decided to plant its flag. The nickname is still used (locally), as is River City–more in honour of Edmonton’s lovely river valley than any attempt to declare that anybody will recognize it as The City That is Bisected By a River, because that’s every city too.

1991: Fun City never stuck, but 27 hotels, attractions, agencies and festivals spent money trying to implant this in minds of value-conscious tourists. It’s likely the closest any slogan came to acknowledging the existence of the West Edmonton Mall, one the city’s top calling cards.

1996: Bill Smith, a three-term mayor, was fond of calling Edmonton”the greatest city in the greatest province in the greatest country in the world.” Mercifully, he did not inflict that daft boast on a city sign or T-shirt. But in his first state of the city speech, he unfurled the slogan Top of the World and replaced his suit jacket with a branded sweatshirt. The reference to the continent’s northernmost metropolis lives on today as the name of a local travel agency.

2001: A Daily Telegraph sportswriter, unenthused by the host city of the world track and field championships, called it Deadmonton. More outrage ensued. The Edmonton Journal ran nearly three dozen articles about the slight that August, and Wayne Gretzky and Premier Ralph Klein defended the city from the sneer of one bored Brit.

2003: As part of the long, painful process of shedding the Deadmonton rap, Economic Development Edmonton launched a nickname search. Its focus groups and marketing experts coughed up a five-slogan shortlist: Dream big. Live well; Work, play and prosper; Greater opportunity; It’s right here, and everyone’s favourite adjective-noun clash, Smart and Soul. For obvious reasons, they never picked a winner among these. The Journal and Sun asked locals and children to come up with better ideas. Among them: “Real people, real opportunity,” “Prosperity loves company,” and a fourth-grader’s “The right place.”

2005: After decades of marketers trying to shake off Edmonton’s rap for nasty winters, they tried to embrace it. It’s cooler here became the Edmonton Tourism tagline. “It’s a dry cold” never worked much, either.

2007-2013: Edmonton takes a hiatus from its branding obsession to delve headlong into all-consuming discussions over a $480-million downtown arena for the Oilers, and to what extent the city should subsidize it. Answer: to a great extent.

2012: A mayor’s task force emerges, named Make Something Edmonton. It sidesteps the old slogan debate and instead aims to tell stories about how young creative people can thrive professionally in this city–unlike in Calgary, Winnipeg, Portland and Victoria, where entrepreneurs are generally frowned upon, discouraged and not at all fetishized by local boosters and chambers of commerce.

2013: In a satirical, sarcastic line, National Post columnist Chris Selley writes Edmonton would be “infested with twitchy-eyed, machete-wielding savages” if a flood of Calgary’s size hit the city. Even more outrage ensued. Mayor Stephen Mandel instantly combusts: “It just was so despicable. You know, sometimes I get aggravated, this, I was hurt.” A “vicious slur,” the chamber of commerce CEO fumes. The Post replies: can an 877,000-person city and its leaders take a joke? Entrepreneurial-minded locals make Machete Something Edmonton T-shirts.

2015: A quarter-century after the Oilers’ last Stanley Cup, and after roughly 24 years of civic debate, the city council votes to remove the City of Champions slogan from city signs. Edmontonians wander Jasper avenue aimlessly in search of civic meaning, until months later when the Oilers draft Connor McDavid.

2017: An economic development executive flashes the word Edmonton on a screen and says, glibly and unwisely, that this is the city’s one-word brand. One day later, a prominent artificial intelligence firm owned by Google’s parent company announces its first international lab will be in Edmonton–exactly the sort of company that the city’s business boosters have been trying to attract with promotional guides and brand booklets about a younger, hipper city than others may assume. The executive wisely does not claim credit.