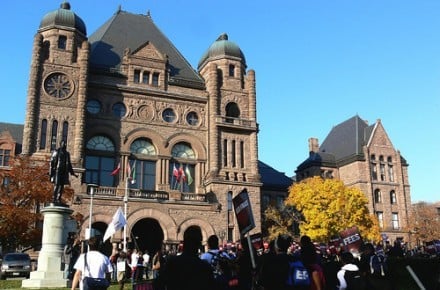 A Chinese woman trying to prove her baby daughter has sole claim to the fortune of a murdered West Vancouver millionaire has won her bid for a paternity test. Under a new British Columbia law, the child stands to inherit the man’s estimated $50 million estate if the results match the remains of Gang Yuan.

A judge in Calgary is expected to sentence two men today for one of the largest Ponzi schemes in Canadian history. Gary Sorenson, 71, and Milowe Brost, 61, were found guilty of fraud and theft in February for an elaborate scheme in which investors were promised unrealistic returns.

TransAlta Corp. says it will review a ruling from the province’s utilities commission that said the company deliberately timed outages at power plants in Alberta at peak times in order to drive up electricity prices. The company said late Monday that its response could “include the possibility of an appeal to the Alberta Court of Appeal.”

A Russian helicopter pilot who was rescued from an Arctic ice floe was expected to arrive in Iqaluit today aboard a Canadian Coast Guard vessel. Sergey Ananov, 49, was on a solo, around-the-world journey in his single-engine aircraft and was about halfway between Iqaluit and Greenland when his helicopter went down in the Davis Strait on Saturday. He spent more than 30 hours on the ice before his rescue.

The Ontario ombudsman will release his annual report.

The federal food inspectors union will make an announcement concerning the state of meat inspection in Ontario.