Elgar Petersen and the pulse of the Humboldt Broncos

The Broncos named their arena after the volunteer who meant everything to the team. The first thing a former player always asks: 'How's Elgar?' 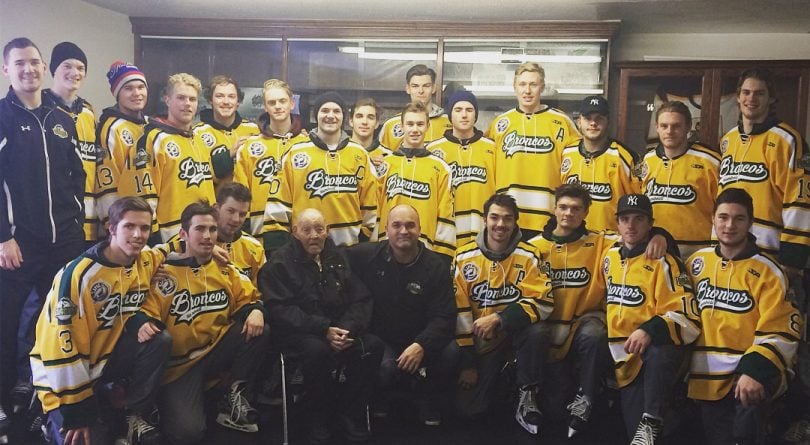 All Elgar Petersen really wanted was for the referee to drop the puck.

It was Sept. 15, 2000, a banner day for the Humboldt Broncos. Fans filled the once-called Uniplex Arena to watch their junior A hockey team for the home opener of the season, but this day was extra special for those in attendance as it marked the city renaming the venue: Elgar Petersen Arena.

Elgar has been the town’s most tireless hockey volunteer since the Broncos’s inception in 1970. When parents dropped their little ones off at the rink, Elgar was in the locker room lining them up on the benches, so he could tie up their skates. When they came off the ice, he was ready with a towel to wipe the snow off the blades.

For the teenagers on the Broncos roster, Elgar was the trainer who would refill the water bottles, grab extra hockey sticks and, most importantly, give you a tap on the helmet when you came to the bench. While he asked for nothing in return for decades of service, the town recognized his selflessness anyways by naming the arena after him.

On the day that marked the dawn of Elgar Petersen Arena, as the always humble and often straight-shooting Elgar looked around as the Broncos fans rose to give him a well-deserved standing ovation, then-head coach Dean Brockman remembers Elgar leaned over and whispered in his ear: “Let’s get the game going already.”

Now 82 years old and living in a nursing home in Cudworth, Sask., Petersen was on hand earlier this month for the saddest event in Broncos history, when thousands of locals gathered at Elgar Petersen Arena to mourn the loss of those who died in the team’s tragic bus accident.

Hockey fans and non-hockey fans alike have since joined together in embracing a Saskatchewan town in its mourning through millions of dollars in donations via a GoFundMePage, hockey sticks left outside front doors, and hockey sweaters worn in offices across the country.

And on the day of the vigil for those lost in the Broncos accident, Humboldt mayor Rob Muench expressed the town’s profuse thanks to everyone—and then to one person in particular: Elgar Petersen.

Elgar was born in 1936 in Annaheim, Sask., but got his start with the Broncos for their inaugural season in 1970. When Dr. Terry Henning took over as the new head coach a few years later, “Elgar just walked in and started helping,” Henning remembers. Elgar, who has an intellectual disability, would show up early to the rink to tidy up the dressing rooms for the arriving players, and stay late at night until the laundry was done for the following day. “I never heard him say ‘no.’ I never heard him complain,” Henning adds. “He was always saying: “Yes, Doc.”

Death was part of Elgar’s daily life in Humboldt; he lived across the street from a funeral home. “His routine was to go across the street, go inside and see who’s on the obit card,” says Mike Schlosser, a close friend. “Then he’d go down to the post office, see who’s name and pictures are there. And then he went on with his daily life.”

In the summertime, that meant a walk to the ball diamond to watch the kids play, where Elgar could also volunteer his time. In the winter, Elgar was almost exclusively at the rink, though he was never a hockey player.

Dean Brockman played midget hockey in Humboldt in 1983 when he first met Elgar. Long before anyone was fully aware of the detrimental effects of concussions, Brockman remembers taking a big hit, being knocked out unconscious and coming to in the Broncos locker room moments later. “I was lying down in the dressing room and remember waking up with this guy over me with smelling salts trying to wake me up.” It was Elgar. “He said: ‘Get off your ass. Your team needs you.’”

When the Broncos moved to the newly-minted Uniplex, Elgar’s short walk to the old rink turned into a 2-km trek by foot, a trip made all the much longer by people driving by and stopping to say “hi.”

“He wouldn’t take ride from anybody,” Schlosser says. “There’d be so many people who would stop and ask if he wanted a ride. ‘Nope. I’m okay,’ he’d say. With all the walking he did, I’m sure he froze his legs lots.”

Brockman returned to Humboldt in 1997 as an assistant coach for the Broncos, and quickly learned about Elgar’s love for pranks. On one road trip to play in Kindersley, Brockman remembers, “we got off the bus, Elgar looked at me and said ‘we forgot our jerseys.’ So I have to take that walk of shame to the other team to see if they have any extra jerseys for us.”

After Brockman made the embarrassing ask, he went back into the Broncos dressing room to ask Elgar if he could help him carry the other team’s extra jerseys they were willing to lend. Instead, Brockman walked inside “and all our jerseys were hung up,” he says.

When Humboldt proposed renaming the arena, and asked its citizens to put forward the names, they didn’t go with the obvious choice of a local legendary player—like Humboldt-native and Hockey Hall of Fame inductee “Mr. Goalie” Glenn Hall—but rather the lifelong hockey volunteer.

When Brockman became head coach for the Broncos in 2004, he and Elgar grew so close that Elgar was often sitting in Brockman’s chair inside the head coach’s office, pretending to boss everyone around. He was known for his hugs, which earned him the affectionate nickname “The Bear” and sometimes he’d even pull your cheek close to his sandpaper-like unshaven cheek to give you friendly “whisker rub.”

On game days, Elgar had free reign to come on and off the team bench as he pleased. “He felt the pulse of the team,” Brockman says. “If the team wasn’t playing well, he’d be all grumpy. If the team was winning, he was happy. Every once in a while, he’d blurt something out, like, ‘We gotta play tougher.’ And you know what, he was bang on.”

When Cody Schlosser, who knew Elgar since he was a child, made his Broncos debut in 2010—coincidentally on Elgar’s birthday—he remembers getting dressed for the game as Elgar sat the entire pre-game in Cody’s stall. “I was hugging the corner of the stall trying to tie my skates,” Cody says. “When I stood up and grabbed my jersey, he looked at me with tears in his eyes. He was so excited to see me grabbing a game jersey and not a practice one.”

But the long, cold walks to the arena started to catch up with Elgar about 10 years ago. As mobility by foot started to slow, his hearing began to fail him. He stopped travelling with the team during Brockman’s last season with the Broncos in 2013.

After the late-Darcy Haugan took over the reigns as Broncos head coach in 2015, he made sure that his players knew of the team’s great history of winning national championships, but also of their accomplishments in creating great people—a feat no one encapsulated more than Elgar. In November 2017, Haugan had the Broncos practice in Cudworth, so that they could visit Elgar beforehand and have their pictures taken with him.

“When you meet an ex-Humboldt Bronco, the first question that’s asked is “how’s Elgar? Every time,” says Aaron Lukan, president of the Humboldt Sports Hall of Fame. “He had a remarkable effect on the players.”

Since Elgar moved to Cudworth, he has daily phone calls with Mike Schlosser. “He always wants to know if anyone around Humboldt passed away,” Schlosser says.

On the evening of the Broncos tragic bus crash in early April, before there was any official word of fatalities, Schlosser called Elgar to break the news. He told Elgar the game was cancelled. The team bus was in an accident. “Right away, he asked if anyone was killed,” Schlosser says. “I said: ‘I don’t know. It doesn’t sound good. It sounds serious, but I’ll keep you updated.” Elgar called every hour up until 10:30pm asking for updates.

The following morning, Schlosser and his wife drove into Cudworth to give Elgar the terrible news in person. His beloved Broncos—the same group of young men who had visited him in his nursing home months prior—has lost their coach, assistant coach, 10 players, their statistician, the team’s bus driver, as well as Tyler Bieber, the voice who Elgar would hear doing the play-by-play over the radio for Bolt FM. “Then we got him to listen to the radio station because the news talk had everything on about the accident,” Schlosser says. “He put his headset on and listened.”

Elgar asked to go for a meal. The nursing home workers had already set up a shrine in a common area, filled with pictures of the Broncos team from their recent visit. “Elgar spent a lot of time there sitting and looking at the pictures,” Schlosser adds.

On the day of the vigil, Cody Schlosser went to pick up Elgar to first visit alumni gathering at a local church before they’d all go to Elgar Petersen Arena together. The players were all chatting and catching up until Cody brought in Elgar in his wheelchair. The room went silent.

“We all went and gave him a hug. Things like that show how much he meant to the team,” says Stefan Freter, who played with the Broncos in 2013-14. “This is one of the communities where the rink isn’t named after someone who donated the money for it. Elgar has been a part of the organization forever and that’s why it’s named after him.”