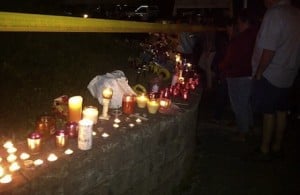 Two women—Doloris Perizzolo, 74, and Lucie Aylwin, 37—did not survive the mall’s collapse.

The former engineer who declared Elliot Lake’s decrepit shopping mall “structurally sound” just weeks before the roof collapsed, killing two women and injuring two dozen others, now wants the chance to inspect something else: the final report of the Elliot Lake Public Inquiry—before the results are released to the public.

Robert Wood, the last professional to examine the crumbling Algo Centre, was charged earlier this year with numerous offences—including two counts of criminal negligence causing death—for allegedly “failing to recognize and report obvious and urgent structural integrity deficiencies” in the mall’s now-infamous rooftop parking lot. Provincial police laid the charges on Jan. 31, more than 18 months after the collapse, and more than seven months after Wood testified at the ongoing public inquiry.

Concerned that the inquiry’s conclusions could now jeopardize his right to a fair criminal trial, Wood and his lawyer, Robert MacRae, are requesting the rare opportunity to review—in advance of its public release later this year—all portions of the final report that refer to him. If they believe any of the passages might taint potential jurors, they could then file a further application, demanding that those sections remain censored until the criminal proceedings are complete.

Wood’s request sets up a potential clash between his Charter rights as an accused criminal and the public’s right to a full, timely release of the inquiry’s much-anticipated findings. In his supporting factum, filed yesterday, MacRae says he is putting forward an “appropriate request” that balances both interests. If his client is not granted permission to view the findings in advance—and then request potential, specific redactions—he says he will be forced to seek a much wider publication ban that “may be overly broad in scope” and represent “a more serious infringement on the rights of the public.”

Commissioner Paul Bélanger, the retired judge overseeing the inquiry, will hear arguments on the matter in an Ottawa courtroom on June 20. Other participants, including media outlets, have until May 26 to declare their intent to oppose Wood’s request.

A resident of nearby Sault Ste. Marie, Ont., Wood, now 65, conducted a visual inspection of Elliot Lake’s only mall on April 12, 2012, concluding that the steel beams holding the parking deck in place were “still structurally sound.” At the time, Wood was no longer a licensed engineer; he was stripped of his credentials six months earlier for the “professional misconduct” he displayed on an unrelated job site.

Ten weeks after his mall inspection, a portion of the rooftop parking lot caved in, sending thousands of pounds of steel and concrete crashing into the food court below. Two women—Doloris Perizzolo, 74, and Lucie Aylwin, 37—did not survive.

Wood’s actions (and inactions) have already been heavily criticized. In a post-collapse report, the Ontario Ministry of Labour chastised him for not testing a single welded connection anywhere in the building, even though there were obvious signs of corrosion. (The ministry has since laid its own charges under the Occupational Health and Safety Act, including one count of “providing negligent advice.”) A separate team of forensic engineers, hired by the Ontario Provincial Police, was equally surprised that Wood described the corrosion as “surface” rust. “The observed evidence of extensive severe to very severe corrosion in the structural steel of the roof parking-level framing contradicts such a statement completely,” they wrote.

Testifying at the inquiry last June, Wood expressed his condolences to the families of the women who died, but insisted he saw nothing during his inspection that suggested anyone was in danger. “I deeply regret that I could not see, and did not predict, the events of June 23, 2012,” he said on the witness stand. “I have spent my entire engineering career designing structures that protect the public of Ontario and the province’s workers.”

Asked why he didn’t test any of the welded steel connections underneath the roof (it was one of those connections, weakened by years of salty slush and rain, that ultimately failed), Wood replied: “I didn’t see anything that gave me cause to advance it to the next level.”

Although Wood’s conduct has been widely publicized, Commissioner Bélanger’s report will be considered the final, authoritative word. Completely independent from any criminal investigations or civil court proceedings, the inquiry’s mandate is to reach “findings of fact,” including potential findings of misconduct. Which is precisely why Wood and his lawyer are so anxious to keep any possible negative conclusions under wraps, pending his criminal proceedings.

The stakes are especially high because Wood’s lawyer, during his closing arguments at the inquiry, specifically asked the commissioner to issue a finding on his client’s credibility. “Mr. Wood answered many tough and difficult questions during his testimony, but answer each question is what Mr. Wood did,” MacRae told Bélanger. “Some counsel, and I am sure others who watched, may not have liked the answers, but I submit that they were truthful. And while a person’s reputation may be impacted by a review of decisions that are made, the worst that can happen is for there to be an accusation that a person is not telling the truth.”

That was last August, five months before Wood was arrested at his home and charged with three crimes that could send him to prison for the rest of his life.

“The publication of any findings of credibility, or other findings with respect to the applicant, Robert Wood, could be far-reaching, given the notoriety that the Elliot Lake Mall collapse has generated,” MacRae wrote in his latest submission. “This notoriety would make the selection of jurors a challenge, given the amount of publicity this matter has generated, thereby negatively impacting the applicant, Robert Wood’s, right to a fair trial.” A finding of misconduct would also “prejudice” Wood, MacRae writes, “in that the Elliot Lake Commission of Inquiry is being asked to make findings regarding the very conduct that will be the subject of the Criminal Code of Canada proceedings.”

Bélanger is scheduled to release his final report no later than Oct. 31. Wood’s trial, meanwhile, will certainly not start by then; a preliminary hearing has not even been scheduled yet. Although Wood is not in custody, he was required to forfeit his passport and is under orders not to communicate with a long list of potential witnesses, including: Bob Nazarian, the owner of the mall; Tracy Patrick, his former administrative assistant; and any member of the Perizzolo or Aylwin families.

Like anyone charged with a crime, Wood is considered innocent unless proven guilty.