ELLIOT LAKE, Ont. – Residents of Elliot Lake, Ont., marked the one-year anniversary of the collapse of the town’s shopping mall by releasing multi-coloured balloons carrying messages of remembrance into an overcast sky, said one of the people who attended the event.

Lifelong resident Joshua Bouchard said people filled a local civic centre on Sunday, listening to songs dedicated to the two women who lost their lives when the Algo Centre Mall roof caved in.

“Emotions were a little high, but calm,” said Bouchard, who has lived in the quiet town of about 13,000 for all of his 25 years.

“I think they’re just glad to come together as a community and remember this event together,” he said.

Just after 2 p.m. — the exact time the mall collapsed last June 23 — hundreds of balloons were let loose individually and bunched together in groups underneath a grey afternoon sky, Bouchard said.

The events were originally set to be held at the site of the former mall, but people were forced inside by rain.

However, the wet weather ended just in time for the release of the balloons, which carried cards emblazoned with personal messages written out by residents.

The Algo Centre Mall is clear of rubble now, and work on building a new mall nearby has begun.

Residents who were left without their main social hub are eagerly awaiting the completion of the new building.

In the interim, a judicial inquiry into the disaster that killed Lucie Aylwin and Doris Perizzolo and injured dozens, has heard from about 60 witnesses.

They have described a badly designed, constructed and maintained mall in which water and road salt penetrated joints in the concrete and rusted steel supports.

But Bouchard said he saw no signs of anger rippling through the assembled crowd despite the anniversary stirring the tight-knit community’s memories.

“We’re just focusing on what happened before so that people can make peace and come together as a community,” he said.

In a few weeks, the final witnesses of Part 1 of the inquiry into the causes of the collapse will testify, including the mall’s third and last owner, Bob Nazarian.

Several witnesses have testified Nazarian was unwilling to undertake the costly renovations necessary, that he ordered an engineering inspection report prepared just seven weeks before the collapse to be altered to downplay the state of disrepair.

Later this summer, the commission will hear evidence about the adequacy of the emergency response to the collapse.

Among witnesses still to testify will be former premier Dalton McGuinty, who intervened when the search effort was called off within hours of rescuers saying they had detected signs of life in the rubble.

Provincial police are also investigating the collapse for any possible criminal activity.

In a Special Report for Maclean’s, Senior Writer Michael Friscolanti tells the story of that tragic day. Follow this link to hear from the ones who got out: www.macleans.ca/onestepfromdeath 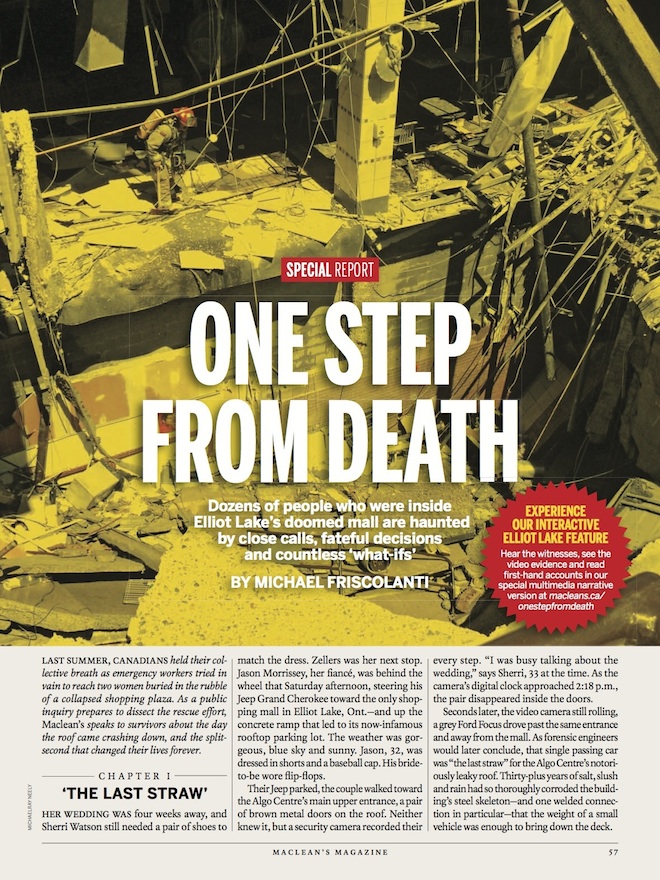 Find the feature at www.macleans.ca/onestepfromdeath