Enough with the climate change half-measures. Canada has real solutions to consider.

Our editorial: It’s clear that both the Conservatives and Liberals look at climate change polling and see a reason for caution. But the science offers none. 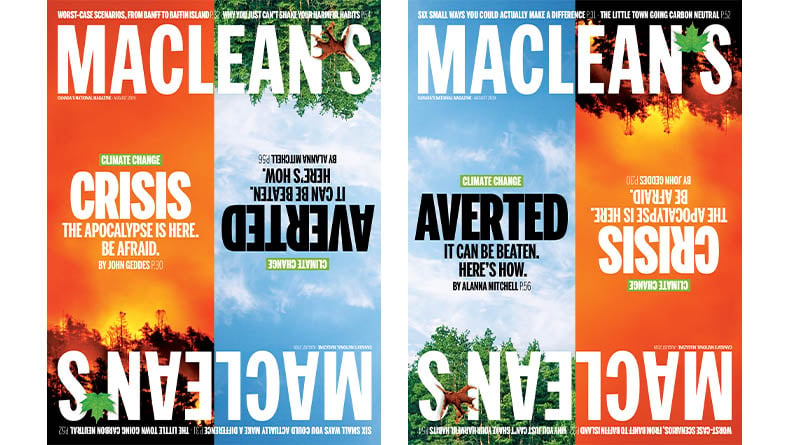 Back in 1988, Maclean’s reported on the growing alarm among scientists over the greenhouse effect, a theory that emissions from industrial activity were warming the climate. With the benefit of hindsight, the article is laden with darkly comedic understatement. One expert notes dryly: “Something appears to be happening here that is unnatural.” Experts quoted in the piece caution against inaction, the consequence being the flooding of coastal cities by 2030. It ends with a warning from climate scientist Henry Hengeveld: “The risks are great enough that we cannot wait to act.”

And yet, here we are. Both Liberal prime minister Jean Chrétien and Conservative Stephen Harper agreed to international emission-reduction targets and then did little to implement them. Justin Trudeau imposed a national carbon tax, but it’s one-half of what’s needed to do the job, according to the Parliamentary Budget Office.

READ MORE: Yes, we should be scared: What major Canadian climate thinkers say about the crisis

If there’s any good news, it’s that Canadians understand the pending crisis. In late June, pollster Nik Nanos said the environment had been the top issue of national concern for four weeks in a row—the first time that had happened in 15 years of his work. A poll conducted for the CBC found 38 per cent of Canadians believe “our survival depends” on addressing climate change, while three-quarters were willing to make changes to their lives to help combat global warming.

But the change Canadians favour is more incremental than radical. Support for carbon pricing is modest. The CBC poll suggested 43 per cent of Canadians support the current carbon tax; Nanos put it at 38 per cent. It’s clear that both the Conservatives and Liberals look at these numbers and see a reason for caution. But the science offers none: they are fiddling while the world burns. As Elizabeth May told Paul Wells in a recent Maclean’s Live interview: “It’s bad luck for the current generation of politicians because the time for procrastination has run out.”

It’s time that Canadians demand results from their political leaders. Which is why we’ve published this climate change issue in advance of the federal election. The articles contained within offer a comprehensive look at where Canada currently stands, what could be done to address the issue and what the consequences might be if this country continues with half measures. We’re not advocating for one fix over another, but there are real solutions to consider.

Maclean’s is making its own commitment to contribute to this important conversation. We’ve joined Covering Climate Now, an international effort to co-operate on and improve coverage of the issue. Led by the Columbia Journalism Review and The Nation, the project will involve a week of reporting leading into a United Nations summit in the fall. As veteran newsman Bill Moyers told a conference that launched this initiative in April: “There’s no future in naysaying.”

This editorial appears in print in the August 2019 issue of Maclean’s magazine with the headline, “Everybody cool it.” Subscribe to the monthly print magazine here.