Erebus found: Inside the first tour of the Franklin Expedition wreck

A look at the careful, complex operation behind archeologists' Arctic dive to explore the wreck of Erebus 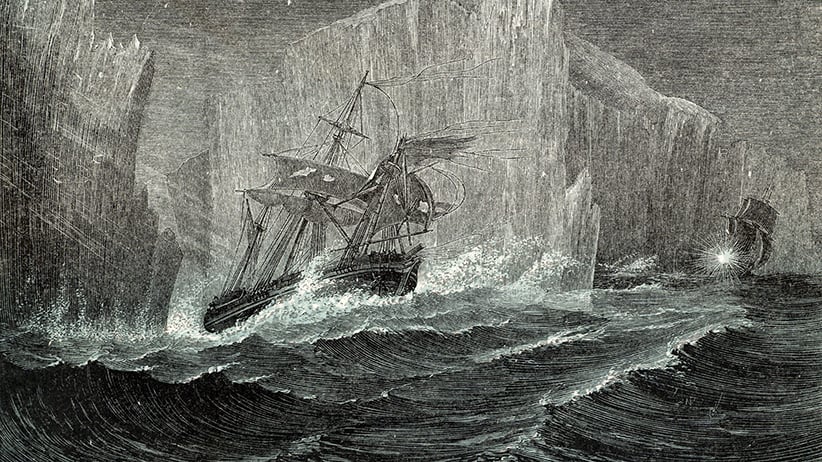 When Ryan Harris first saw HMS Erebus, one of two Franklin Expedition ships that many figured were lost to history until its discovery last September, he equated it to winning the Stanley Cup. So when the underwater archaeologist gave the first tour of the wreckage via a live video on Thursday—swimming around the ship that sits below nearly two metres of solid ice—it was like a well-deserved victory parade.

With air being fed in via a breathing hose, Harris sounded like a friendly distant cousin of Darth Vader as he talked about the contents found aboard the ship. With massive lasagna-shaped pieces of sea kelp almost everywhere, Harris swam all over, from the stern to the deck. He showcased Erebus’s main mast with its top broken off, likely snapped by the ice. The tiller, which helped turn the rudder, was twelve feet long and appeared to be made out of solid bronze, Harris said. “Like everything on this ship, it was heavily overbuilt to operate in the Arctic.”

And though the ship was built for exploration, it still had weapons, including two brass six-pounder cannons. “It was a naval ship, after all, and it was scheduled to get back to England at least three years [after] its departure,” Harris noted. “They could never know how the world’s political situation would change over that time, so they had to be prepared for anything.”

Though the frigid Arctic waters are where Erebus tragically ended its journey 170 years ago, the freezing temperatures may in fact be what kept the ship so well preserved ever since. Underwater, the organic materials on board, such as wood, are exposed to less oxygen than if they were above ground. Meanwhile, the ice that covered the surface above a good chunk of the year protected the ship from harsh waves. Inside the ship, researchers hope to find clues that may even unlock another one of Canada’s cold cases, the location of its travel companion, HMS Terror.

Bad weather delayed the setup of the dive camp by about a week, and the dives themselves by three days. Blizzard conditions hampered the massive airlift out of Yellowknife and Cambridge Bay, and heavy crosswinds made landing transport planes on the ice dangerous. But now that weather has finally improved, with clear skies and no wind, there is a new problem: too much sun. At high latitudes, there is about an extra 10 minutes of sunlight with each passing day this time of year. By early May, it’s estimated the ice surface will be too soft and sticky for the hulking aircraft that are supplying the camp to safely land and take off again—not unlike barrelling down a ski hill and hitting a sunny patch of snow that nearly stops you in your tracks. “We don’t want it to get any warmer,” says Rear-Admiral John Newton of the Royal Canadian Navy, who flew in earlier this week with former BlackBerry CEO and Arctic Research Foundation co-founder Jim Balsillie.

The struggles to erect the camp highlight the challenges of operating in the Arctic, where the larger sovereignty-focused operation Nunalivut is held every year. Weather is a constant factor, as is the availability of aircraft and fuel. After making more than 70 flights over the past week, two of the Royal Canadian Air Force’s Twin Otter aircraft—described as the “workhorse of the North”—sat idle Wednesday as they awaited parts in Cambridge Bay, where a large military camp has been erected. Meanwhile, the army conducted patrols on the ice to the east of Victoria Island using snowmobiles and sleds. The mostly Inuit Canadian Rangers have also conducted patrols. In all, about 200 military personnel from across the country are involved in the operation coordinated by Joint Task Force North.

Planning and logistics are key to operating above the Arctic Circle. At the dive site, in the eastern Queen Maud Gulf, everything from food to diving equipment must be flown in and back out again. Ice experts first inspected the makeshift runway at the dive site to make sure it was sturdy enough to handle all scheduled traffic. Tom Zagon, a physical scientist with the Canadian Ice Service who conducted an “ice reconnaissance mission” earlier this month, says sea ice can behave elastically, rippling and bending under heavy loads. A test flight with an LC-130, the designation given to a ski-equipped C-130 Hercules operated by the U.S. Air National Guard, was conducted earlier in the week without any cargo onboard to double-check Zagon’s calculations.

As for the dive itself, members of the Navy’s Fleet Diving Unit are working in tandem with underwater archeologists from Parks Canada. In the run-up to the operation, the two groups of divers, which normally operate in very different worlds, conducted several joint practice runs, including one in Quebec City. The Navy divers taught the Parks divers how to use their tethered equipment and cut holes in the ice—usually in a triangle shape to make climbing in and out easier—with a diesel-powered, hot-water tool. Parks Canada divers, meanwhile, gave the Navy clearance divers lessons on how to carefully map out a 160-year-old shipwreck using a grid system.

Though the frigid and unpredictable Arctic weather creates havoc with just about every other aspect of the operation, Petty Officer 1st Class Sean Barry told Maclean’s shortly before he left for Nunavut that, once the divers are underwater, there’s little difference between diving in the Arctic and Halifax Harbour, where the navy’s dive unit is located. “The diving is actually the easy part,” he says, adding that there’s less turbidity and zero chance of being pushed off site by rough seas. The divers were also able to string up lights under the ice using ice screws, better illuminating the wreck.

Yet, for all the technical and logistical challenges of making the dives on Erebus happen in the midst of an Arctic winter, Barry said it was the human factor that he would be most preoccupied with as he camps 11 metres directly above the shipwreck. His main job as one of the team’s leaders was making sure the divers didn’t overdo it and wind up injured—a fear that’s only been heightened thanks to the compressed schedule. “We’re looking at about 12- to 14-hour days,” said Barry. “And because this is part of history, people are probably going to try and push themselves. Up there, if an accident happens, it’s hard to get resources.”

The cost of the expeditions and its subsequent research weren’t immediately available from Tony Clement, president of the Treasury Board, who was on hand to watch the live feed of Erebus from the Royal Ontario Museum (ROM) in Toronto. The federal government appears to be keen to capitalize on the ship’s discovery as a proof positive of Canada’s claim to ownership over the northern waters. The MP mentioned Arctic sovereignty on multiple occasions in reference to these expeditions. “I don’t think we’re going to find a Russian flag on the Erebus,” Clement said. (Of course, HMS Erebus being a British ship, they won’t find a Canadian flag either.)

As underwater archaeologists learn more about Erebus, crews have covered more than 800 sq. km of the Victoria Strait, where they hope to one day find HMS Terror.

For the future of Erebus, which can no longer lay claim to Canada’s greatest unsolved mystery, don’t be surprised if the area welcomes tourists in the foreseeable future. “There’s already a really good heritage centre in Gjoa Haven,” said Jeff Anderson, VP of Operations for Western and Northern Canada with Parks Canada, adding they can build on telling the story of the Franklin at the Nattilik Heritage Centre. That could include boat tours or cruise ships, he said while at the ROM.

As for letting Canadians visit Nunavut and explore the site themselves underwater, Anderson added: “That’s something to explore.”