Everything is right in the country again 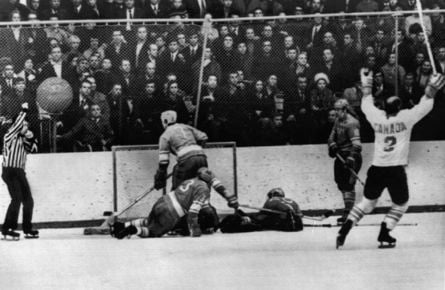 I wasn’t watching the game when Sidney Crosby scored to win the gold medal for Canada. My wife and I speak at marriage conferences and we were doing one in Victoria, B.C., at the time. We had given a speech all through the first period, but had a break over lunch, so I watched the second and third periods, or what I thought was going to be the end of the game.

When the U.S. tied it up, I had 120 couples waiting for me to talk. I told them before we started that if anyone’s got a radio or an iPod, to not say a word if the U.S. scores. But if Canada scores, please yell it out.

About 15 minutes into the talk, a lady yelled out, “Crosby’s just scored for Canada!” We went nuts and cheered. It was the first time in my life I ever led a singalong when we spontaneously started singing ‘O Canada.’

There were several American couples there and they stood up with us. My wife was smart enough to thank them for standing up as we sang our national anthem, as difficult as that might have been. I’d forgotten about the Americans being there or I might have been a little more sensitive myself. I had obviously gotten caught up in the moment.

The truth is I had gotten caught up in the whole Olympics. I think most of Canada did. The hockey tournament seemed to carry a bit more importance, though. It seemed to be that if we could just win that, everything would be right in the country again.

I’m the eternal optimist, so I always thought Canada would win. And if I was going to pick somebody to score in the overtime period, Crosby seemed like a natural choice. You’re going to go with a goal scorer. In ’72, I probably would’ve picked Phil Esposito.

Immediately after the game, Crosby said he couldn’t remember how he’d scored his goal. I could play mine in slow motion. A guy had tripped me and I fell behind the net. Even falling, I remember thinking, ‘I’ve still got enough time to score a goal.’ Then I saw Esposito take a whack at it. Vladislav Tretiak should’ve just covered it—I should never have been able to get the rebound. It wasn’t a hard shot, but Esposito probably surprised him. The puck came right to me and, to be truthful, I really panicked and tried to fire it along the ice. Tretiak went down and he got it with his pad. But, thank goodness for me, it came back and I just fired it again. To see it go in was just incredible.

When that puck went over the line, my first thought was sort of melancholy—I thought of my dad. He had died in 1968 and I had not thought of him once during that whole season. But I remember saying out lout, ‘Oh, Dad would’ve loved this one.’ It was gone in a millisecond and I jumped into Cournoyer’s arms and we’ve been celebrating for 38 years.

There’s no question we’ll be celebrating Crosby’s goal in much the same way. Of course, some of the circumstances are different. For me, the goal changed expectations. I quit enjoying the game for a while because I started putting so much pressure on myself, trying to do things I could never do. But for Crosby, this doesn’t change his game at all. This is who he is and this is what he does, game in and game out. And in 1972, with Communism, it was an ideological war as much as a hockey war. It’s tough to get really upset about the U.S.

Still, for Canadians that weren’t around 38 years ago, Crosby’s goal will be a defining mark. Canadians will remember where they were, what they were doing, how they celebrated, and Crosby will forever be known as the guy that scored The Goal, just like I am.