Tony Accurso, who entertained union leaders and politicians on his luxury yacht, began testifying before the Charbonneau Commission Tuesday 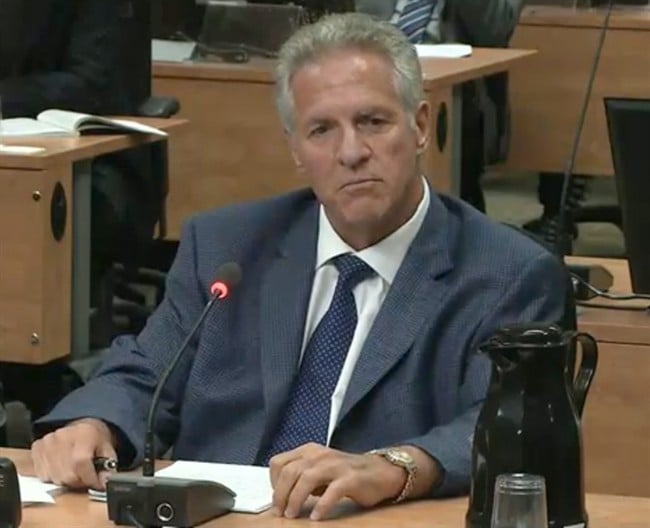 Tony Accurso took the stand after commission chair France Charbonneau rejected his bid for a publication ban as the inquiry resumed after a summer break.

Accurso, once the owner of several influential construction companies, had argued that testifying at the inquiry would jeopardize his right to a fair trial in pending criminal proceedings. He feared his appearance would taint potential jurors.

But Charbonneau maintained that Accurso was sufficiently protected, notably because the commission would not question him about details involving his upcoming criminal trial.

The Supreme Court of Canada recently dismissed a request that would have allowed Accurso to not testify at the inquiry. He also lost similar legal battles in Quebec courts.

During his first day of testimony, Accurso discussed a 1980 meeting with Louis Laberge, who once led the powerful Quebec Federation of Labour.

He said he was afraid to meet with Laberge, who along with other union leaders was imprisoned for refusing to comply with back to work legislation during a public sector strike in 1972.

“To come face-to-face with Laberge, during those years, it’s was really something,” he added.

Laberge, who died in 2002, was also one of four QFL presidents who had gone for trips on “The Touch,” Accurso’s yacht. The others were Michel Arsenault, Henri Masse and Clement Godbout.

In an earlier appearance before the commission, Arsenault testified that he returned an expensive Christmas present his wife received from Accurso in 2008 — a $12,000 pair of diamond earrings — because he felt uncomfortable with the luxurious gift.

He also insisted he paid for every penny of renovations worth $97,000 to his own home, even as wiretaps seemed to suggest that Accurso would be paying for part of it.

Arsenault, who also oversaw the QFL’s billion-dollar Solidarity Fund as well as heading the union, was repeatedly asked whether there was a conflict of interest in holding both positions.

He admitted there was an interest in pushing for Accurso’s companies to succeed because the fund was heavily invested in them.

The inquiry has been examining the QFL, its publicly-funded investment fund, and the type of sway people tied to organized crime had with administrators of the union’s construction wing.

Charbonneau noted the size of the audience for the controversial Accurso’s appearance on Tuesday, joking out loud that she wondered what could have brought so many people out.

A relaxed and sometimes smiling Accurso began his testimony by talking about his start in the construction business, his involvement in university football and his engineering studies.

He said he started working for his father’s construction company when he was six and continued working summers while studying engineering at Montreal’s Concordia University.

At one point, prosecutor Sonia Lebel asked Accurso to talk about his father’s setback in 1964, when he was found guilty of collusion and corruption. Accurso said he didn’t know anything about it and the matter was dropped.

Accurso eventually took over the business from his father.

When the inquiry resumed its hearings, Lebel also explained the direction it will take before it submits its report in April.

She said the commission will examine contracts awarded by Hydro-Quebec and the Crown utility’s relationship with engineering firms.

The inquiry has already heard from more than 100 witnesses since it was formed in 2011.