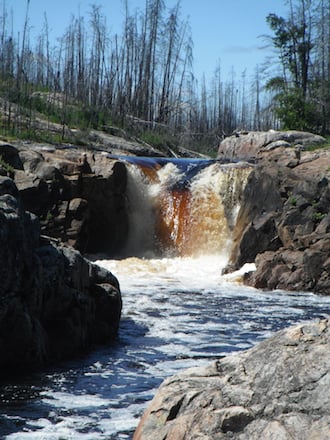 A picture of the falls Adam Shoalts went over on the Again River. (Courtesy: Adam Shoalts)

An explorer’s unexpected tumble down a set of waterfalls in Northern Ontario is being labelled a discovery that will “change the map of Canada.” Or, he might just be remapping already charted territory. It all depends on who you ask.

Adam Shoalts, a 27-year-old explorer sponsored by the Royal Canadian Geographical Society (RCGS), made the could-be-catastrophic find while canoeing down the Again River in 2012. The waterway is south of James Bay and runs along the Ontario-Quebec border. It’s a remote area of Northern Ontario where vegetation is thick, quick-moving rapids and blood-thirsty insects are abundant, and explorers are few.

While navigating a set of rapids, Shoalts found himself, and his canoe, hurtling down 12 metres of water. “It took me a moment to digest that fact that I’d discovered a waterfall, which I was really excited about. That’s a good discovery, a waterfall! But then, I’m like, ‘Oh my goodness, I think I’m going to get swept over it,'” Shoalts told the Toronto Star. When he overcame the shock of plunging into the water, he rushed to land and chased the rest of his equipment and his canoe, which were being swept away. It was only when he caught everything that he realized he had found a series of waterfalls that seem to be previously undocumented.

Shoalts has just returned from his second trip to the Again River, where he documented and photographed the area. Articles have outlined his success so far, with the Guardian writing this “could well be the largest discovery in Canada in 100 years.

However, some experts say this is not as big a discovery as Shoalts is making it out to be. Denis St-Onge, a physical geographer who is the former president of the RCGS, said in an interview with Maclean’s that the term “uncharted” is being misused. “All of Canada is covered in maps,” St-Onge says. “In the case of the Again River, there is a rather detailed map at a scale of 1: 50,000, meaning that every centimeter on the map is equal to 500 meters on the ground. A set of rapids are clearly identified.”

In the late 1950s and early 1960s, the Canadian government funded a project that aimed to map the entire country, using cameras mounted on airplanes. This created an overlay that gives the appearance of three-dimensional imaging. “There are three sets of photographs for that area,” St-Onge says. “If you use the aerial photographs, you can clearly see where the small waterfalls are.” 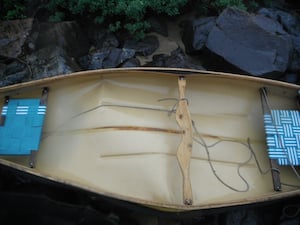 Shoalts' damaged canoe after his trip over the falls. (Courtesy: Adam Shoalts)

On his blog, Shoalts says that he did look at the aerial photographs, as well as topographical maps, which show changes in landscape and elevation. But he said they were outdated, and had not changed since the 1950s. While the existing maps indicated strong rapids, he did not see anything indicating a waterfall. “Even from directly above a big rapid in a canoe, it can look like a waterfall with a vertical drop until you paddle right up to it,” Shoalts says “So no, there was no way I could tell that there were waterfalls ahead of time, I was definitely surprised to find them—I figured there would be plenty of rapids (which there is) but I didn’t imagine any falls.”

Christopher Storie, vice-president of the Canadian Cartographic Association, confirms that it can be difficult to differentiate fast-moving rapids from waterfalls on a topographical map. “You will see a convergence of contour lines representing a point where elevation drops significantly,” he says. Without a notation on the map, there is no way to measure the drop. As for aerial photography, Storie says the interpretation could all depend on the angle of the shot. Turbulent water could indicate a waterfall; however, it may not be clear from the photographs or the map whether that waterfall is one-metre deep or 100 metres. This means Shoalts should have known there would be a significant drop, but he may have misinterpreted how far that drop really was.

Shoalts second trip to the Again River took two weeks. He said that the portage was easier the second time, but the weather was rainy and the water levels were higher. “I swamped in one rapid in my canoe, and had to swim to shore, and my canoe was wrapped around a rock in another rapid which did a bit of damage.” During this expedition he measured the waterfalls, photographed them, and recorded their longitude and latitude. He intends to add these details to the existing topographical map, as well as create his own map of the area.

St-Onge remains skeptical of the merits of Shoalts’ return trip, and says it is like he is “putting detail on a map that already exists.”

Whether or not Shoalts is changing the map of Canada, like he claims, remains up for debate. However, Shoalts could well have been the first human to travel those rapids. The RCGS told the National Post that they had scoured historic fur-trade records and interviewed aboriginal elders of the Moose Cree First Nation to confirm this fact.

“I think it is a great discovery,” says Storie. “In the age of Google maps, in 2013 someone is discovering something never seen by human eyes. I think its remarkable and exceptional.” 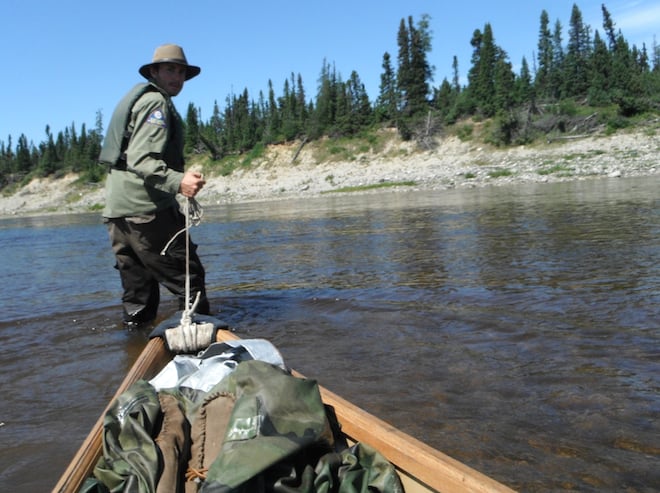