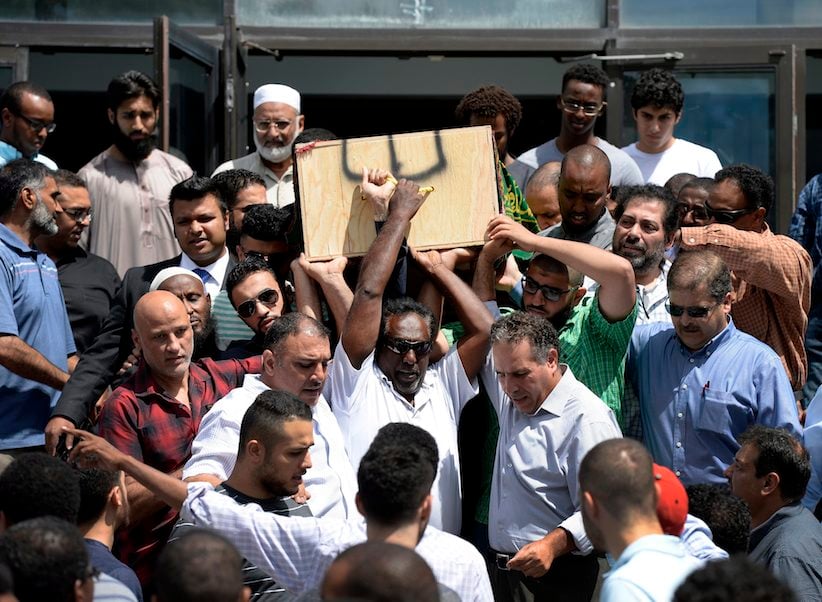 The casket of Abdirahman Abdi, who died after an altercation with Ottawa Police on Sunday, is carried out of the Ottawa Main Mosque after his funeral on Friday, July 29, 2016. THE CANADIAN PRESS/Justin Tang

OTTAWA — Demands for answers and better police training were mixed with tears and sorrow as family, friends and members of Ottawa’s tight-knitted Muslim community memorialized a Somali-Canadian man who died after a confrontation with police.

There were also cries for justice Friday from amongst the overflow of mourners at the funeral service for 37-year-old Abdirahman Abdi, who was taken down by police officers on a sidewalk following a disturbance call last Sunday.

“We all have many questions, but we are trying to be as patient as possible as the investigation continues,” Abdi’s family said in a statement read by Imam Sikander Hashmi.

“This is a time for grieving and not finger-pointing,” Watson said outside the service. “I think what we have to do is allow the SIU to take the time that’s necessary to do a full and thorough report . . . and let the judicial system take its course.” 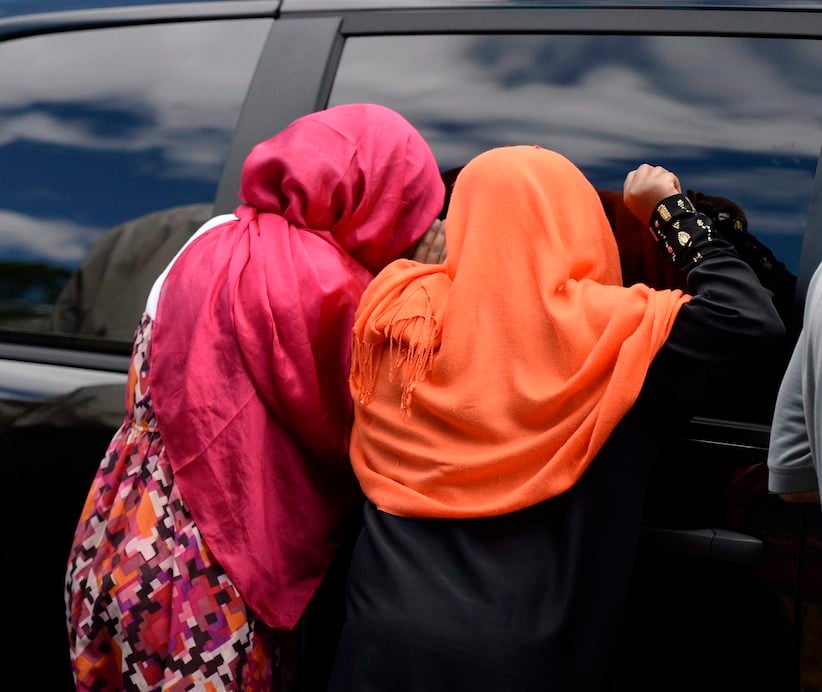 Women touch the glass of the vehicle carrying the casket of Abdirahman Abdi, who died after an altercation with Ottawa Police on Sunday, outside the Ottawa Main Mosque after his funeral on Friday, July 29, 2016. THE CANADIAN PRESS/Justin Tang

Ottawa’s main mosque, with a capacity of 2,000 people, was overflowing for the service with dozens of mourners forced to kneel and pray on the sidewalk in front of the building.

Naeem Malik, president of the Ottawa Muslim Association, said the community turned out in solidarity.

“The family needs our support because they are not only Somali, they are Muslim,” he said.

“So we are here with them.”

Related: Why we can’t trust the SIU to probe the death of Abdirahman Abdi

Abdi’s death struck the community hard, said Farhat Rehman with the Canadian Council of Muslim Women, who worried about how the circumstances would affect police-community relations.

“I think it’s touched a nerve,” she said.

Abdi’s body was brought into the mosque for the service in a plain plywood box shrouded in a green blanket adorned with golden Arabic lettering.

Initial reactions to his death were shock and horror, Mohamed Sofa said Friday in a statement on behalf of the Ottawa Somali community.

“We were left traumatized, left to make sense of such senseless violence.

“The pain is real, it is felt deeply and by many. This last week, we have seen tears shed, and emotions expressed. People shared stories of Abdirahman’s kind nature and gentleness of his soul,” the statement said.

“While the circumstances that brought us here today are very troubling, the outpouring of love and support for the family is a testament to the beauty of Ottawa.”

Ottawa police Chief Charles Bordeleau has said officers were responding to 911 calls Sunday regarding “multiple assaults” at a local business and, after trying to make an arrest, officers chased Abdi on foot.

Bordeleau did not attend the funeral service but was expected to offer condolences to Abdi’s family members on Saturday.

Ontario’s SIU said there was a “confrontation” outside an apartment building down the street from where Abdi lived with his family, just 15 minutes away from the mosque, and he suffered medical distress.

Several dozen people gathered for a vigil in Montreal on Thursday night, saying Abdi’s death highlights a widespread culture of police brutality that disproportionately victimizes people who are black or mentally ill.

The Canadian Association of Somali Lawyers, a national organization representing Somali-Canadian lawyers from across the country, has said the incident is part of a larger pattern.

“Too often, police officers do not de-escalate or use excessive force when dealing with African-Canadians, let alone African-Canadians with disabilities or in mental distress” its president, Billeh Hamud, said in a statement.