Famous Gretzky statue getting a facelift

The bronze No. 99 has been holding the Stanley Cup over his head outside Rexall Place for the past 27 years 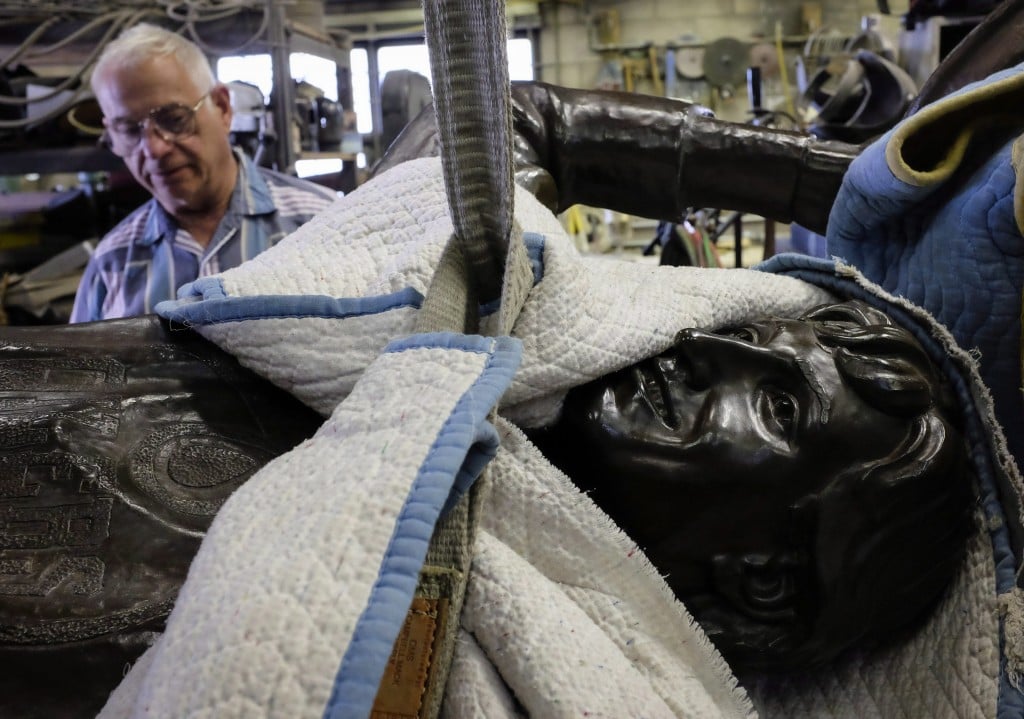 Don Begg, a bronze artist and founder of Studio West, prepares to give a facelift to a statue of hockey great Wayne Gretzky at his foundry in Cochrane, Alta., Friday, Aug. 5, 2016.THE CANADIAN PRESS/Jeff McIntosh

COCHRANE, Alta. – He stands nine feet two inches tall and hasn’t aged a bit, but the statue of hockey great Wayne Gretzky could use a waxing and a bath.

The 430-kilogram bronze statue of No. 99 holding the Stanley Cup over his head has been on display at Rexall Place for the past 27 years, but with a move to a new arena in the near future he’s taken a road trip down south to where he was created.

“Yes it’s a facelift,” laughed Don Begg, a bronzesmith with Studio West in Cochrane, west of Calgary, who worked on casting the statue back in 1989 after it was sculpted by John Weaver.

“Actually he still looks pretty good to me. We’ve examined him over and he’s really in good shape but everything needs a little bit of tender loving care after 27 years.”

During a recent visit to Begg’s Studio West workshop, the statue was hanging horizontally. It was partly covered – including the Stanley Cup – but The Great One’s smiling face and Oiler logo were clearly visible.

The biggest challenge, said Begg, was removing him from his spot at Rexall Place. The old bolts now have to be removed, new ones put in and then he will be waxed, shined up and made to “look like he’s brand new” for the new location.

Begg, who used to live in Edmonton, admits to having a “soft spot” for the Oilers and especially Gretzky. When a statue like this one is created they always break the mould – much like Gretzky the hockey player.

“We broke the mould but he’s still there and that’s the main thing.”

“They do a small amount of maintenance and we’re just going to shine him up to go into a new location.”

There are pictures of the creation of the statue – including a number of Gretzky himself – on a bulletin board outside the workshop.

Begg said he’s proud to have been part of the Gretzky statue, and that the fact it’s in bronze makes it all the better.

“Whether we cast him or we sculpt him it really is an honour to be part of that – of something that’s going to last for thousands of years,” Begg said.

“There’s nothing you can make that lasts as long as a bronze.”

Begg said he doesn’t expect the clean up to take more than a week as opposed to the six months spent during the creation process.