The three-day visit by the polarizing leader of India, Narendra Modi, begins Tuesday 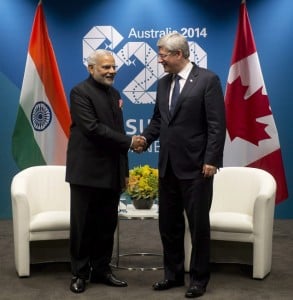 Canadian Prime Minister Stephen Harper shakes hands with Indian Prime Minister Narendra Modi before a bi-lateral meeting at the G20 Summit in Brisbane, Australia Saturday November 15, 2014. Anticipation of an Indian prime minister’s first visit to Canada in 42 years is building as fans and foes of Narendra Modi see him as either a rock star of economic development that could benefit both countries or a suppressor of minority rights. (Adrian Wyld/CP)

VANCOUVER – Anticipation of an Indian prime minister’s first visit to Canada in 42 years is building as fans and foes of Narendra Modi see him as either a rock star of economic development that could benefit both countries or a suppressor of minority rights.

Modi’s three-day trip starting Tuesday is being billed by the Canadian Prime Minister’s Office as an opportunity to broaden the trade relationship involving education, energy and science and technology.

Modi, who swept to power last May as leader of the Hindu nationalist party, will attend official meetings in Ottawa before giving a speech at Ricoh Coliseum in Toronto and then visiting both Sikh and Hindu temples in Vancouver and Surrey, B.C.

Balpreet Singh, spokesman for the World Sikh Organization of Canada, said the group is calling on Modi to address escalating attacks on minorities including Christians and Muslims in India. The group also wants the two governments to address attempts to marginalize Canadian Sikhs as extremists and denial of visas for Sikhs in Canada.

Jatinder Singh Grewal of Sikhs For Justice said the group has asked Attorney General Peter MacKay to start legal proceedings against Modi, who was a chief minister in the Indian state of Gujarat in 2002, when minorities including Sikhs and Muslims were killed in riots.

“People of that calibre do not have the right to enter the free world,” Grewal said, noting the United States denied Modi a visa in 2005 for his alleged role in the riots though he was later cleared by a court and invited to the U.S. last fall.

During a rousing speech at Madison Square Garden in New York last year, Modi was hailed as a hero whose policies could jump-start the economy of the world’s largest democracy while benefiting international partners.

Protesters outside denounced Modi for human rights violations and Grewal said his group will do the same in Toronto, where Modi is slated to visit a monument honouring 329 victims of the Air India bombing in 1985 and at his visits to the B.C. temples.

Grewal said Sikhs for Justice has called on Prime Minister Stephen Harper to ask Modi to hold a referendum to create an independent homeland carved out of the Indian state of Punjab.

He said 15,000 Sikhs across Canada have signed petitions for the referendum, which would be held internationally in 2020 and allow Sikhs from around the world to move to their indigenous state, develop their own economy beyond its agricultural roots and live without fear of persecution.

Grewal, who is 36 and was born in Canada, said the separatist state that may be called Khalistan would be a draw for Sikhs, similar to Jews who have chosen to move to Israel from elsewhere and retain dual citizenship.

“It’s our legal right under international law to have the right to self-determination as defined in the United Nations,” he said.

V.I. Lakshmanan, chairman for the non-partisan Canada India Foundation, which fosters public policy and a stronger relationship between the two countries, said Modi’s visit could enhance economic and cultural opportunities for both democracies.

“Beyond the economy, in terms of the global village how the two democracies can come together can be very helpful,” he said.

Ranjit Hayer, executive board member of the Khalsa Diwan Society, which runs the Ross Street Sikh Temple, North America’s largest gurdwara, said people wanting to attend during Modi’s 30-minute visit on Thursday had to apply to get in.

He said the RCMP are doing security checks on the 700 applicants but that only about 300 people will be selected.

Hayer said Modi will also visit the temple’s exhibit of the Komagata Maru incident of May 1914, when the Canadian government denied entry to 376 passengers, mostly Sikhs, who were forced to returned to India aboard the steamship.

Vancouver police Sgt. Randy Fincham said the department has been working with the RCMP to prepare for Modi’s visit, which includes a dinner with Prime Minister Stephen Harper.