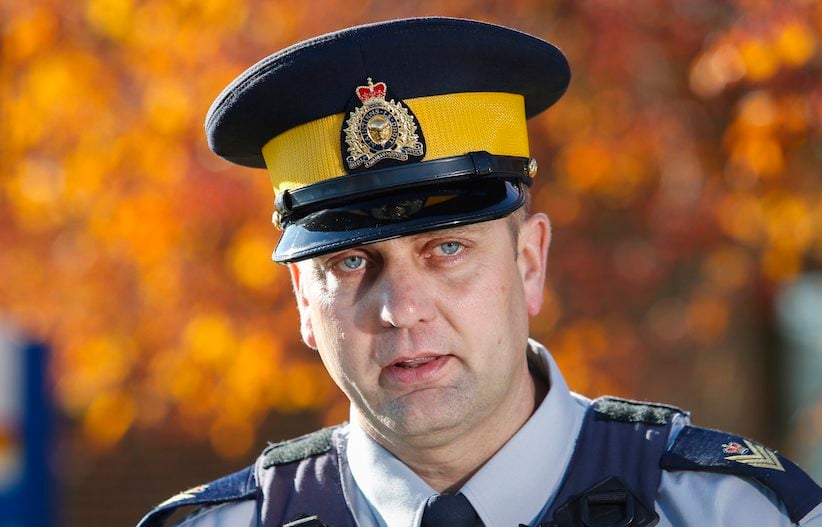 RCMP Sgt. Mike Numan speaks to the media from the RCMP detachment in Rocky Mountain House, Alta., Wednesday, Oct. 14, 2015, about the deaths of three girls on a farm near Withrow, Alta.THE CANADIAN PRESS/Jeff McIntosh

WITHROW, Alta. – Three sisters killed in a farm accident in west-central Alberta have been identified.

Catie Bott, who was 13, and her 11-year-old twin sisters Jana and Dara were buried while playing on a truck full of canola on Tuesday night.

The accident happened on a family farm near Withrow, about 200 kilometres north of Calgary.

RCMP say adults were able to pull the girls from the truck and perform CPR, but two of them couldn’t be revived. The third girl was flown by air ambulance to a children’s hospital in Edmonton but died overnight.

In a statement read by the RCMP, the parents said the girls grew up on a farm and they don’t regret introducing their daughters to a farm lifestyle.

“Our kids died living life on the farm,” the family said. “It is a family farm. We do not regret raising and involving our kids … on our farm. It was our life.

“Thank you for all of the overwhelming support that we have received from all of the first responders, neighbours and friends. We would ask the media to respect our privacy at this time of grief.”

Exactly what happened is still under investigation.

Emergency crews initially said the girls were in the truck while it was being loaded, but the RCMP said they were playing on the truck when they became buried.

Sgt. Mike Numan, who became emotional while reading the statement from the family, would not answer any questions.

“This is hitting all of us very hard,” Numan said. “Frontline responders are routinely called out to sad situations, but things are always harder for everyone when kids are involved.”

Pastor Brian Allan of the Withrow Gospel Mission said people in the tiny community quickly went to the farm to help the parents and their son.

“They are obviously devastated,” Allan said Wednesday. “There is just a deep sense of loss and sadness.”

Allan said the parents and children have been strong members of the church and have lived in the area for years.

“We are going to be spending time with them. I know that there are guys down there working around the farm right now, cleaning things up and just trying to get things back to some sense to normal,” he said.

“We feel the impact of this loss in a substantial way.”

Neighbours plan to finish the harvest for the family.

— With files from reporters John Cotter and Chris Purdy in Edmonton.