The local reeve calls them 'criminals.' But other Canadians just want to help those who've risked their lives fleeing Donald Trump's America 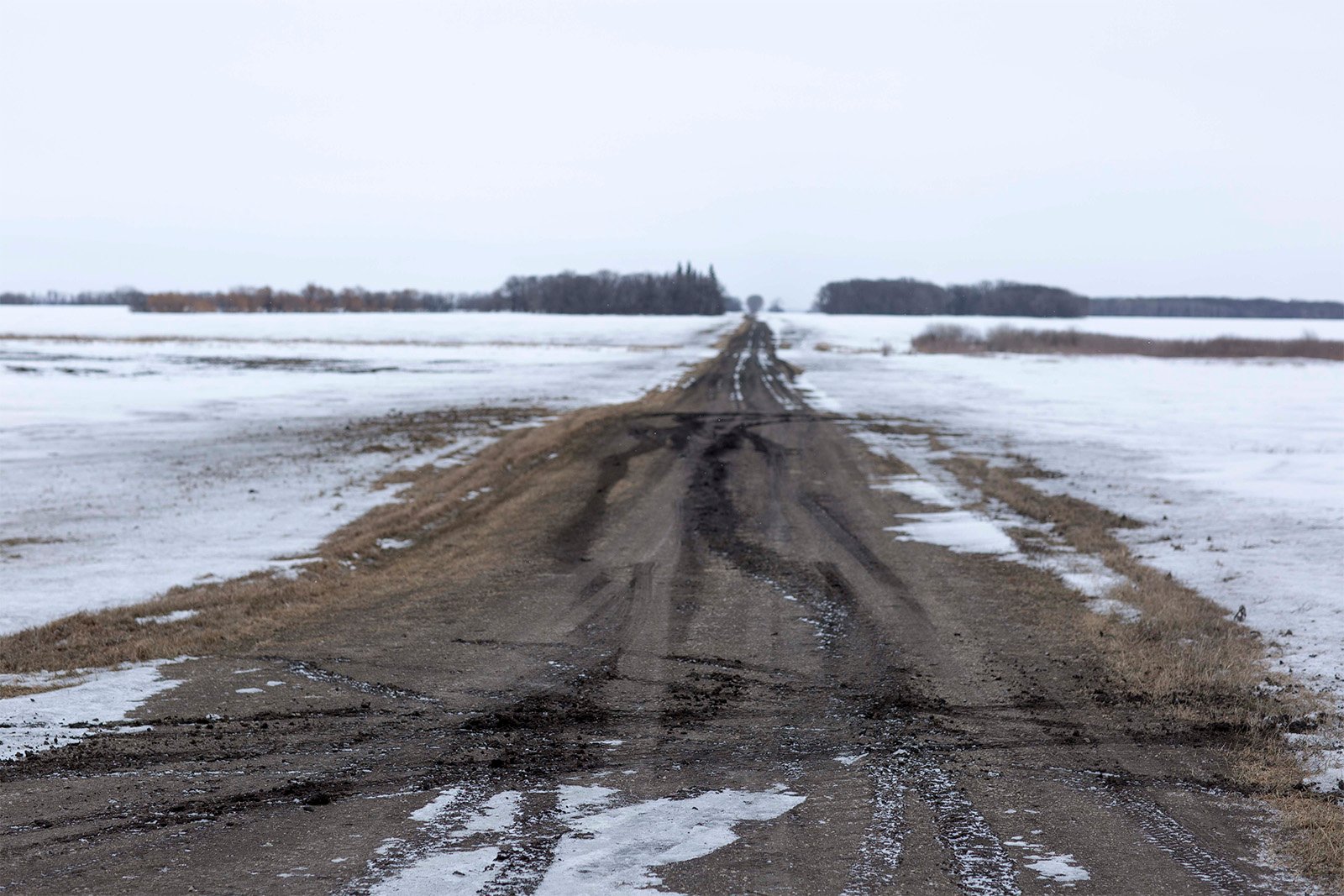 The eastern border of Emerson, Manitoba and Noyes, Minnesota, where refugees cross into Canada. Emerson, located 96 kilometers south of Winnipeg, is a popular crossing for asylum seekers.

Brenda Piett is the local emergency official who hosted about 19 border-hopping African refugee claimants in an Emerson, Man., curling rink over the weekend, but she has two other jobs. She’s the co-publisher and sales manager for the local newspaper, and works at the Emerson duty free shop. In fact, her role as the assistant emergency coordinator for the municipality isn’t a job at all—it’s a volunteer gig. She was filling in for the emergency coordinator, a guy named Bill, who has training and gets $300 a month for his on-call services. Bill was away for the weekend.

So here Piett was on Saturday, hauling out blankets and pillows and overseeing the making of Nutella sandwiches for starving would-be Canadians. The Manitoba border town’s residents have grown used used to asylum-seekers wandering through town and nearby fields in search of refuge—in ever greater numbers—but this weekend marked a first. Never had there been so many at once that the local Canadian Border Services Agency office ran out of space in which to process them, and needed an overflow waiting room in the nearby town.

Things seemed to be heading in this direction, and at some point a link in the chain of assistance is bound to snap under pressure. The number of migrants making the risky journey to become refugees in Manitoba grew rapidly before Donald Trump became president, but his inauguration and wildly disruptive refugee and travel ban decrees multiplied the sense of urgency of those seeking safe harbour.

“That’s not human rights. That was not what I was wishing when I was in Somalia, when I was coming,” Somali migrant Farhan Ahmed told CBC after safely crossing the Minnesota-Manitoba border. Ahmed made the overnight journey through snowy fields with a group that included women and children, and in the -20 C cold he couldn’t feel his hands, much like the Ghanaian men whose frostbite during their December crossing was so severe they lost their fingers.

(They sneak in through fields because under a controversial U.S.-Canada agreement, claimants get turned away if they enter through established U.S.-Canada border posts. Some cross west of the 24-hour Emerson station, but the latest group reportedly trudged through snowy fields just east of town, from Minnesota.)

MORE: Why refugees in the U.S. are risking life and limb to come to Manitoba

The 22 claimants the RCMP and Emerson border officers processed this past weekend is equal to the total they handled for the entire months of February 2016, February 2015 and February 2014.

To handle Saturday’s overflow, the municipality agreed to house the travellers in the Emerson Complex, just like they do when a snowstorm shutters the highway and strands motorists.

The council for Municipality of Emerson-Franklin is holding an emergency meeting to figure out the protocol for next time, which seems worth preparing for as the anxiety in the U.S. over Trump’s immigration regime keeps high. “Something has to be addressed, and we are not security. We can’t hold these people because we’re not qualified,” says Greg Janzen, the reeve.

Piett, the volunteer, got the call at 8:30 a.m. Saturday, to open the curling and community-hall complex. The first four claimants, whom border officials had partially processed, fell asleep not long after she brought them emergency pillows and blankets. A few volunteers helped as the numbers in their makeshift waiting room fluctuated throughout Saturday. Her husband Don Piett pitched in, and the group fed the Africans bread and Nutella. They were hungry. Very polite and quiet too, Don Piett recalls.

“We couldn’t really talk to them because they didn’t speak English, and we don’t speak anything else,” he says.

The border authorities, who did not respond Tuesday to an inquiry, seemed unprepared for such big groups of migrants all at once—19 overnight Saturday, then three more on Sunday. A small-town and rural municipality isn’t equipped either. Janzen, the reeve, wasn’t aware of the Emerson Complex situation until he was at a “Bud, spud and steak” dinner Saturday evening at the town’s fire hall. Surprised, he hustled across the street. A small handful of claimants waited for border officers to fetch them to finalize processing.

“Just sitting by a table; I said hi, they said hi back, and I talked to the people that were babysitting them,” Jansen says. RCMP officers, who answered the migrants’ 911 call and brought them to the border agency post, weren’t providing security, the reeve notes; it was just the tiny volunteer crew. The last refugee claimants cleared out by Saturday night, and the 600-person town held their winter festival’s pancake breakfast and bonspiel the next day, as scheduled.

Janzen, who lives a half-hour north of the border town Emerson, sees this is a public safety issue, and uses a word that (for good reason) few others use to describe these border-crossing refugee claimants.

“They’re criminals,” Janzen says. “If they’re willing to jump the border at night and basically break the law, you don’t know what they’re capable of until they’re fully processed. Are they good people?”

The migrants’ off-highway border crossing is indeed illegal, and the Canadian Border Services Agency describes it that way. But the RCMP doesn’t criminalize it by laying charges. Canada is signatory to the United Nations’ Convention of Refugees, which prohibits criminalizing entry to a country to seek asylum. 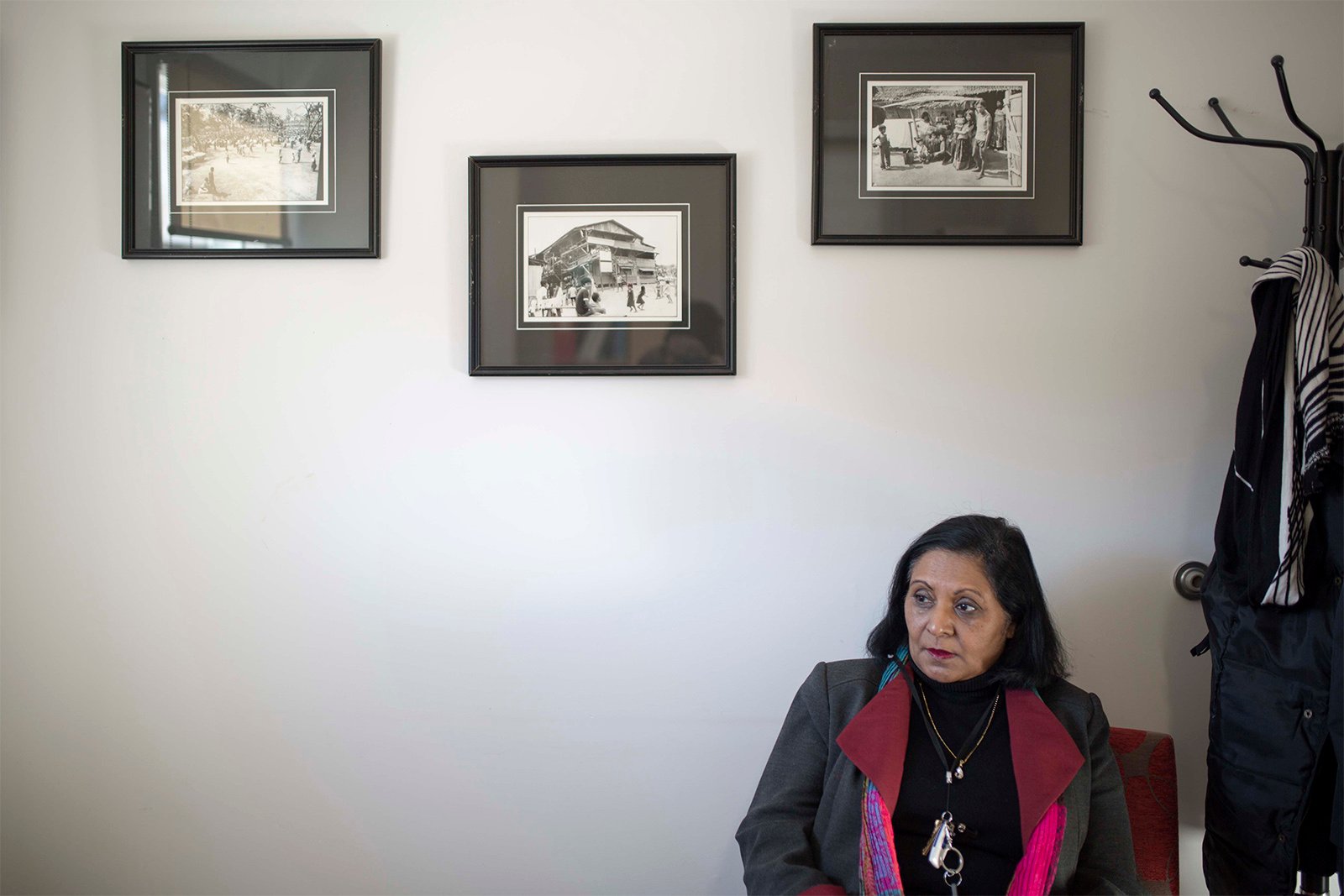 Still, the stigma of illegal border crossing initially made it difficult for the support agency at Winnipeg’s Welcome Place to raise funds, according to Rita Chahal, who oversees it. In some corners, there’s outright hostility to refugees, particularly Muslims. A couple weeks ago, Chahal spoke about refugee claimants on Winnipeg talk radio for a half-hour before the host fielded callers. “We don’t really want them here if they want to kill us,” Doug opined. “Why not get as many of these terrorists in as they can? … I think our trouble is coming,” said Gary, a remark which prompted the host to emit a long sigh.

Chahal’s association is stretched thin, as it assists another unprecedented influx of claimants in Winnipeg. “We can’t leave anyone in the lurch. Once they’ve sought asylum, we have the responsibility to help them complete their story and the application within three days.” But the recent story in Maclean’s, and subsequent coverage by Reuters, The Guardian, Washington Post and other international outlets has drawn new attention and generosity her way. Her agency has fielded donations from Vancouver and Germany; one person gave them $23,000 on Tuesday morning.

And despite Janzen’s reservations, the mood back in Emerson has been typical of Friendly Manitoba: These people are nervous with Trump,” Don Piett reasons. “They’ve chosen to cast their lot with Canada rather than gamble they’ll get home from the States, knowing they could be sent home from here too.”

On Thursday, Chahal will drive to the border town to discuss with rattled local officials how to proceed when the next large group of asylum-seekers walks over to seek safety. If the issues driving people to flee the United States don’t abate, the community must adapt. “They’re quite distraught. They don’t know what to do,” Chahal says of folks in Emerson. She may as well have been referring to the migrants—though they increasingly seem sure of what to do, and where to go.