The world's worst debate in one word? 'Shumbling.'

Ivor Tossell on fear and loathing, cynicism and untruths, on the road to city hall 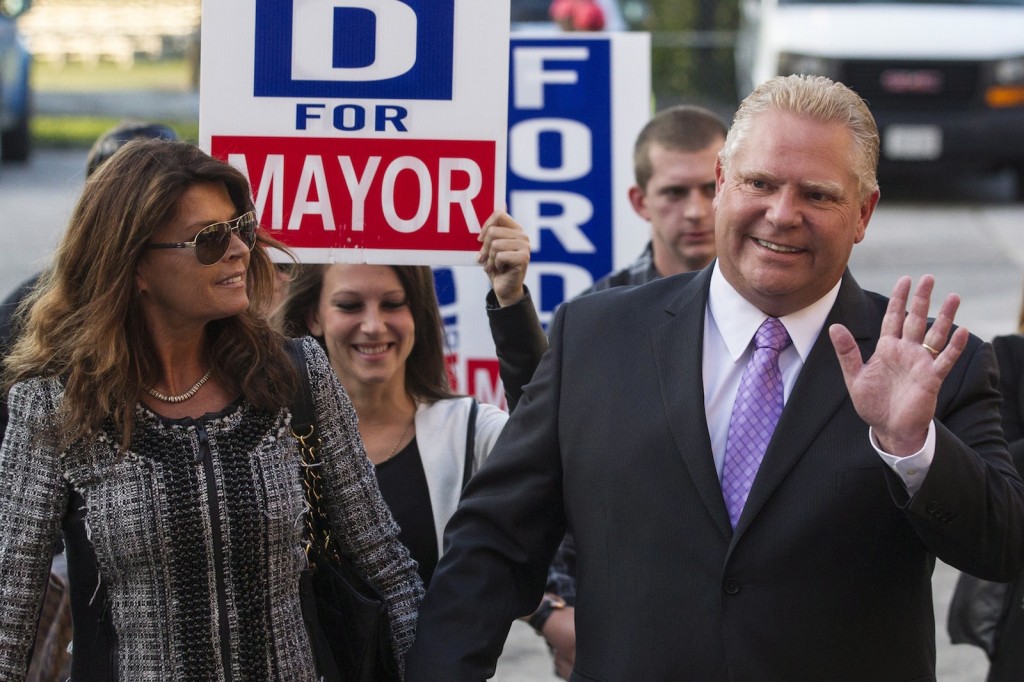 Doug Ford and his wife, Karla, in Toronto on Tuesday evening. (CP photo)

Instead of denying everything, the Ford supporter who heckled mayoral candidate Olivia Chow to “go back to China” was quite happy to explain his remarks when I caught up to him after the candidates’ debate.

“She wants Chinese currency here for exchange. And she speaks with a less-than-Canadian accent, even though she’s been here for half a century. And she was on the public housing system in Canada. You can’t have it both ways. If she wants to be a pretend-China, then go back to China.”

It’s hard to pin down exactly why yesterday’s battle-royale mayoral debate was so depressing, given so many options, but this is a good place to start.

The event was billed as Doug Ford’s grand entrance into the mayoral race, his first head-to-head clash with fellow candidates John Tory and Olivia Chow. Ostensibly, it was to be held in Ford-friendly country, but, in the end, it might as well have been a studio audience. Every campaign had done its best to stack the crowd, to the extent that, in the end, it seemed there was no one left who was not contractually yelling on cue.

The format of the debate was simple. One candidate would say something, and people would scream. Then another candidate would say something, and other people would scream. The Tory people seemed to have won on numbers, but the Ford people had nabbed the prime spots, filling up the first 10-odd rows, and won on braying virulence. Up they would pop, waving flags, pumping both fists in the air, yelling epithets.

‘I’ve asked Doug to finish what we started’

What we know about Doug Ford

It only took 20 minutes for the screamers to start screaming at each other. One of the Fords’ most consistently disruptive supporters—whom I’d previously seen going off the rails at World Pride (“Why should I stand up for Sodom and Gomorrah!”) and two other events—stood up and caused such a ruckus that the whole debate ground to a halt, until the police led her out to multi-partisan calls of “OUT! OUT! OUT!” Then the regular partisan screaming resumed.

“Oh God,” said the woman in front of me, getting up to leave.

“I’m going to watch this at home,” said her friend, following.

The candidates, who, as recently as last week, were seen conversing like actual human beings, arrived with untested new attack lines, and embarked on the debate like a trio of self-help groupies embarking on a mission to find their worst selves. Drowned out by the jeering partisans, they took to shouting one-liners, but, in the room’s muffled acoustics, this just came out as shouty mumbling. Shumbling.

Doug sat hulking in the middle of the podium, a scowl fixed on his face, class war on his mind. “You’re used to everything being handed to you on a silver platter,” he shumbled at Tory at one point, as his cheering section howled. At another, “You’re from a whole different world, John.” This millionaire-on-millionaire sneak attack threw Tory off-kilter, leaving him defensively laughing in the same way his own attacks had Rob Ford nervously chuckling short weeks ago.

People started to trickle out. Groups of well-heeled Tory supporters crept out of the back rows. The Ford seats stayed packed. Doug Ford’s long-time associate David Price—who appeared on the city payroll at the height of the crack scandal, with no discernable duties beyond the fact that, as Doug once famously put it, “loyalty can’t be taught”—was cautioned by police for getting too rowdy. You could barely hear anything above the general menagerie.

Soon it was time for the parade of the transit maps. The candidates took turns holding their lines-on-a-map placards over their heads like beauty-pageant contestants, while their respective segments of the audience howled their approval. Then they took turns saying absurd things about each others’ placards.

Chow, for instance, kept demanding to know how much destruction Tory’s half-baked plans will wreak on the city. “How many homes will be destroyed?” she asked. It is true that Tory’s transit gurus had produced a flimsy, impractical plan that proposes rail lines in places rail lines can’t go. It is probably not true that John Tory will hop on a steamroller and start personally displacing parents and their mewling children.

Doug Ford, meanwhile, whose transit plan is not just half-baked but entirely bogus, trotted out a collection of flat-out lies that were eye-opening, even by his standards. He repeated the assertion that part of the Eglinton Crosstown LRT was being buried “because of Rob Ford.” This is a fun take on history: The Eglinton Crosstown was designed and approved under his nemesis, mayor David Miller, and Rob Ford’s contribution was actually to cancel it on his first day of office.

“We built a consensus to build the Scarborough subway!” shumbled Doug later on, which also was not true in the slightest. (The Fords’ bungling sank their own Scarborough subway plan, before Karen Stintz cooked up a new one and dropped it in their laps.)

Chow, however, had a retort. “The only way to build consensus is by telling the truth,” she said and, for a brief, shining moment, it seemed like someone was going to drag this conversation back to reality. Chow paused while her partisans screamed, then plunged ahead: “How many houses would be destroyed to build SmartTrack?”

In a rare moment of unity, everybody laughed.

And soon, everybody left—the hacks, the journalists, the swarming TV cameras, the T-shirt partisans, the garden-variety bigots, everybody feeling worse about themselves and the planet they’re stuck on, except possibly the bigots, who had a pretty good run.

Democratic exercises can bring out the best and the worst in everyone. Toronto is discovering, through patient trial and error, exactly which ingredients are required for the latter: fear, loathing, endless cynicism, repeated untruths, vocal bullying, liberal amounts of racism, and a bunch of partisans, stuck in a room, with nothing left to do but to shout each other down in a zero-sum game of attrition. Just add Ford.