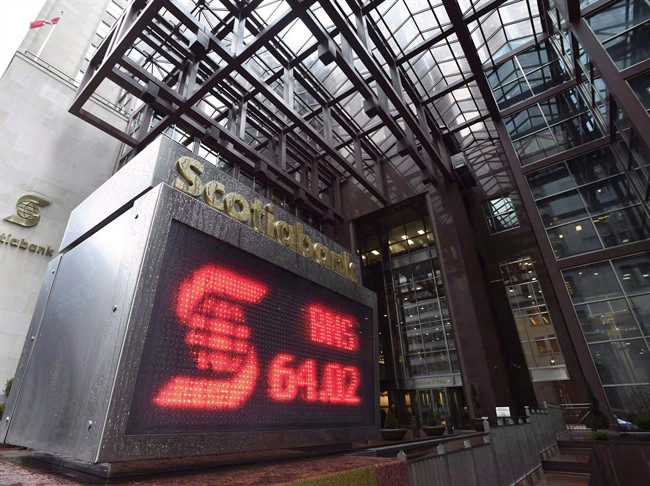 An electronic sign posting financial data is shown outside the Scotiabank building in Toronto Thursday, April 9, 2015. Scotiabank is the latest big Canadian bank to predict the federal government is on track for a bigger-than-expected deficit this year. (Frank Gunn/CP)

OTTAWA – The federal Liberal government will update the country’s economic and fiscal progress Tuesday, hoping to encourage Canadians to focus on the potential of its long-term plan — and overlook the sting of multi-year, multibillion-dollar deficits.

The Liberals won last year’s election on a platform promising to help lift the slow-growth economy with billions worth of borrowing to fund more ambitious infrastructure and child-benefit programs for the long haul.

But a few months into their mandate, the Liberals pointed to weaker-than-expected economic conditions as they tripled their anticipated budgetary deficits for the next two years — nearly $30 billion each. They predicted more than $110 billion in total shortfalls over the next five years.

MORE: Why McKinsey & Co. is helping Ottawa out, pro bono

Facing political pressure to show results from the early investments, Finance Minister Bill Morneau is expected to reiterate his argument Tuesday that Canadians should be fixating on the government’s long-term goals.

It remains to be seen whether the trajectory revealed Tuesday will push the books even deeper into the red, as some of Canada’s big banks have predicted.

Over the course of 2016, the Liberals gradually started to roll out their measures during an economic downturn that saw experts downgrade their growth outlooks.

Bank of Canada governor Stephen Poloz has noted the economic benefits of the Liberals’ first investments, such as richer child-benefit cheques, have yet to show up in the numbers. Poloz has acknowledged, however, that it’s still early and that he expects to see positive impacts in the second half of 2016.

On Monday, Morneau said during question period that the public would see positive results from the enhanced child benefits and the Liberals’ tax-bracket changes, which lower tax rates for middle earners and raise them for the well-heeled.

“What we’re going to do tomorrow is talk about our long-term plans to make a real difference for middle-class Canadians for the future,” said Morneau, who will deliver the fall statement in the House of Commons.

“We’re going to have a plan for the long term to improve the situation for our economy.”

In the House of Commons, interim Conservative leader Rona Ambrose attacked the Liberals’ approach, challenging them to build a plan that will create jobs instead of adding to the public debt in Tuesday’s statement.

“Who does the prime minister think is going to pay for this next spending spree?” Ambrose said.

Morneau’s statement Tuesday is expected to be more substantive than the usual economic and fiscal projections of a typical fall update. Sources have said it will seek to convince the public the Liberal economic plan is working and promote Canada abroad as an alluring investment destination in an uncertain world.

The document is also expected to echo some of the advice Morneau received from his council of external experts, who were hand-picked to help the government boost economic growth.

Earlier this month, the council released recommendations urging Ottawa to broaden its proposed infrastructure bank to leverage private capital, to increase immigration to 450,000 people from 300,000 over five years and to create an agency with a goal to expand foreign direct investment in Canada.

The government’s immigration targets for next year, revealed Tuesday, stayed level at 300,000, but established that threshold as a permanent baseline, with plans to increase it in future years. This year’s target was considered a temporary spike to allow for an influx of Syrian refugees.

Sources say Morneau’s update will echo some of the council’s advice, but — like Immigration Minister John McCallum’s targets — likely won’t adopt the group’s recommendations outright, particularly those that might be considered too ambitious.

The document is also expected to provide some details on the government’s infrastructure program, to which Ottawa has already committed $120 billion of public money over the next decade.

The Liberals vowed to create an infrastructure bank during the election campaign and Morneau’s advisory council envisions it as a tool Canada could use to leverage some of the trillions of dollars in available private capital. In return, investors would get stable, reliable returns on projects through user fees, such as on toll highways.

The update is also expected to reaffirm the government’s so-called “fiscal anchor” to lower net debt-to-GDP ratio — a measure of the public debt burden — over the next five years. The budget outlook was criticized for lacking another fiscal goal preferred by some economists: a clear timeline to return the federal books to balance.

“I’ll be very concerned to see if the government has got any kind of plan for getting itself back to balance at some point,” said William Robson, president and chief executive of the C.D. Howe Institute — a think tank that Morneau himself chaired until 2014.

“I’m uneasy about that. I think many people are. I actually think it’s one of the reasons that federal fiscal stimulus may not be having as much of a positive effect on the economy as some of its boosters say.”

On Monday, Scotiabank became the latest bank to forecast a bigger-than-expected federal deficit for 2016-17. It predicted the feeble economic situation would force Ottawa to run a $30-billion shortfall this year and a $32-billion deficit in 2017-18.

That’s higher than the federal government’s March budget projections of $29.4 billion this year and $29 billion next year — predictions that each included $6-billion cushions for risk.

Scotiabank said the government will use up those cushions, but also anticipated offsetting boosts from a slightly better oil-price outlook and the 2015-16 year-end fiscal number, which was $4.4-billion better than expected.

The bank also said that Ottawa’s target of lowering the debt-to-GDP ratio over the coming years would remain achievable, even with the bigger annual deficits.

Earlier this month, TD bank projected a federal shortfall of $34 billion for this year.